It's hard for me to care much about the details of the proposed fiscal year 2015 budget just released by the White House, because no one else seems to care much, either. Indeed, the focus on short-term budget issues is causing us to lose focus on the fact that U.S. government borrowing is on an unsustainable long-run path.

Under the Congressional Budget Act of 1974, the President is required to submit a budget to Congress by the first Monday in February. This year's proposed budget arrived the first Tuesday in March. President Obama's Office of Management has now missed the legally mandated timeline four of the last five years. This delay might seem to make it harder for Congress to meet its own legislatively required deadlines, except that the chair of the Senate Budget Committee, Patty Murray, has already announced that the Senate won't take up a budget this year--and indeed, the Senate hasn't passed a budget at all in four of the last five years. Murray says that the Senate will rely on the spending limits over the next two years that were in the bipartisan deal enacted by Congress and signed into law by President Obama. However, the Obama budget proposes breaking those same spending limits.

Rather than agonizing over fine-print details of budget proposals, I'm more likely to head for the "Historical Tables of the U.S. Budget," a highly useful resource for looking at long-run trends, and for the "Analytical Perspectives" volume of the budget, which breaks down issues like tax expenditures, infrastructure spending, and others.  But unlike in years past, these volumes apparently weren't ready to be released with the rest of the already-late budget earlier this week, and are supposed to be published next week.

All of this just illustrates a theme that is already apparent to anyone who watched politics: the process for producing a federal budget is broken. Alan J. Auerbach and William G. Gale offer a reminder of why this matters in "Forgotten but Not Gone: The Long-Term Fiscal Imbalance." To set the stage for their discussion, here are two figures from a report last month from the Congressional Budget Office. The first shows budget deficits as a percentage of GDP over time. The second shows the accumulated federal debt owed to the public as a share of GDP over time. 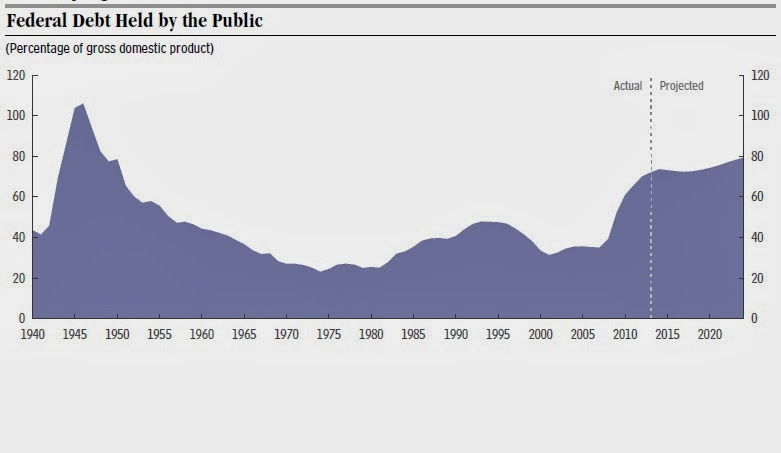 Notice that budget deficits have fallen sharply in the last few years, as one would hope and expect given that the actual recession ended in June 2009. However, the deficits have not yet fallen back to the average for the last 40 years. In addition, the accumulated level of federal debt, while lower as a share of GDP than the peak reached when World War II was fought with borrowed money, is already higher than at any other point in U.S. economic history. Here are some comments from Auerbach and Gale:

First, ignoring projections for the future, the current debt-GDP ratio is far higher than at any time in U.S. history except for a brief period around World War II. The painful budget deals  in 1990 and 1993 occurred when the debt-GDP ratio was more than 20 percent of GDP lower  than it is now. ...

Second, while we clearly face no imminent budget crisis, the 10-year budget outlook
remains tenuous and is worse than it was last year, primarily due to changes in economic conditions ... There is no “smoking gun” in the 10-year projections, “just” a continuing imbalance  between spending and taxes. . . .  Notably, there is no suggestion in the projections that the debt-GDP ratio will fall. In the  past, when the U.S. has run up big debts, typically in wartime, the debt-GDP ratio has  subsequently been cut in half over a period about 10-15 years. Under current projections, the debt-GDP ratio will rise, not fall; the only question is how fast. ...

Third, the fiscal problems worsen after the next 10 years. Results over the longer term
depend very much on one’s choice of forecasts, in particular regarding the growth in health care spending. Nevertheless, under the most optimistic of the health care spending scenarios we  employ, the debt-GDP ratio will rise to 100 percent in 2032 and 200 percent by 2054 and then continue to increase after that. All told, to keep the 2040 debt-GDP ratio at its current level, 72  percent, in 2040, would require immediate and permanent policy adjustments – reductions in  spending or increases in taxes – of 1.9 percent of GDP under current policy. To keep the ratio at  its current level through 2089 would require immediate and permanent adjustments of about 3.5  percent of GDP.


As Auerbach and Gale point out, none of the short-term arguments over raising the debt ceiling or spending caps in the next couple of years map out any route toward these kinds of changes. Of course, projecting the future is always full of uncertainty. You can read their paper for an in-depth discussion of underlying assumptions. But uncertainty should imply planning, rather than inaction. As Auerbach and Gale write:


"The debt-GDP ratio has already doubled, to more  than 70 percent. The future is already here. There are benefits to getting the deficit under  control – including economic growth and fiscal flexibility – regardless of whether the long-term  problem turns out to be as bad as mainstream projections suggest. ... [P]urely as a matter of arithmetic, the longer we wait, the larger and more
disruptive the eventual policy solutions will need to be ... Policy makers certainly may not want to reduce spending or raise taxes during a weak period for the economy, but that is different from not planning ahead."

For past blog posts on the economic costs of large budget deficits, see here and here.