The recovery of the U.S. economy since the end of the Great Recession in June 2009 has been sluggish and weak--and still much better than in most high-income countries. Here a figure from the 2014 Economic Report of the President, released earlier this week. 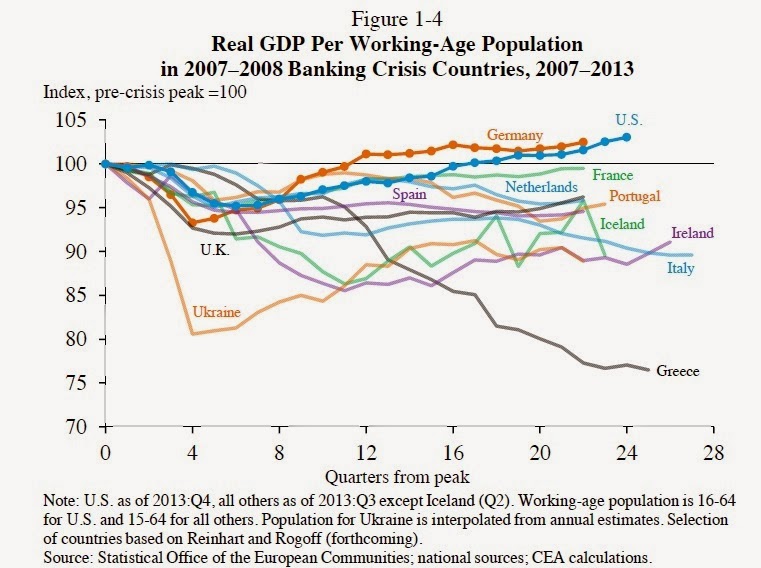 The figure shows Real GDP per Working Age Population. Real GDP means that it is measuring national economic output adjusted for inflation. By looking at "working age population," it is adjusting for size of population but not (in a direct way) for level of unemployment. The horizontal axis measures quarters that have passed since the start of the recession. The vertical axis set the measure of output for each country equal to 100 at that time, so that you can easily compare the patterns across countries since that time. A few lessons jump out at me.

1) The U.S. and Germany are the only two of the 12 countries shown that have recovered back to the level of output/working-age population from before the Great Recession.

2) It's natural for Americans to focus on the problems of the U.S. economy, but by comparison, the U.S. economy is looking pretty good. The euro crisis isn't in the headlines right now, and I sometimes read that the crisis is past us. But look at the output/population level in Greece or in Italy, still sinking. The euro-area unemployment rate is up around 12%, and is at 25% in Spain and Greece. Germany, thanks to flexibility of its labor market institutions and benefits from the euro zone, has been doing well, too.

3) Ukraine was added to this graph at what I suspect was the last minute. You can see the shock that hit Ukraine's economy back in 2008, and how slow it has been to recover.

4) International comparisons are always a bit tricky. After all, the U.S. has been less affected by the euro crisis than countries of the European Union. Nonetheless, the basic fact is that the U.S. economy is leading the way in this comparison group, which suggests that U.S. economic policy in the aftermath of the Great Recession did something right. To put it another way, critics of the U.S. fiscal and monetary policies in the aftermath of the Great Recession need to explain why, if the policies were so bad, the outcome has been comparatively so good.