Will the U.S. Dollar Remain the World's Reserve Currency?

In the question-and-answer period after I give talks about the U.S. economy, someone always seems to ask about whether the U.S. dollar will remain the world's reserve currency. But at least so far, it's holding steady. Eswar Prasad reviews the arguments in "The Dollar Reigns Supreme, by Default,"
which appears in the March 2014 issue of Finance & Development.

One way to look at the importance of the U.S. dollar is in terms of what currency governments and investors around the world choose hold as their reserves. In the aftermath of the 1998 financial and economic crash in east Asia, lots of countries started ramping up their U.S. dollar international reserves. In the aftermath of the Great Recession, a number of countries spent down their dollar reserves to some some extent--and now want to rebuild. For example, here's a figure from Prasad on the form in which governments hold foreign exchange reserves. Notice that there's no drop-off in the years after the recession. 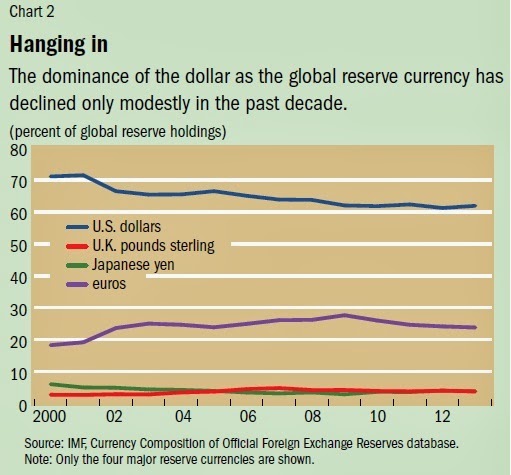 "The global financial crisis shattered conventional views about the amount of reserves an economy needs to protect itself from the spillover effects of global crises. Even countries with large stockpiles found that their reserves shrank rapidly over a short period during the crisis as they sought to protect their currencies from collapse. Thirteen economies that I studied lost between a quarter and a third of their reserve stocks over about eight months
during the worst of the crisis."

The U.S. dollar is also by far the dominant currency in world economic transactions. It is often how global prices are denominated. When bills are paid between counties, or investments are made between countries, and there is a need to carry out an exchange rate conversion, the U.S. dollar is often involved even when the transaction has nothing to do with the U.S. economy, because other currencies are converted into dollars in the inner processes of the exchange rate markets. The U.S. dollar is used in 87% of all foreign exchange transactions, in foreign exchange markets that are now trading over $5 trillion per day.

The U.S. economy clearly benefits from being the world's reserve currency in an important way: There is an enormous appetite around the world to hold U.S. dollar assets, which makes it a lot easier when a low-saving economy like the United States wants to the borrowing large amounts from foreign investors.  Here's a figure from Prasad showing who holds of U.S. government debt: 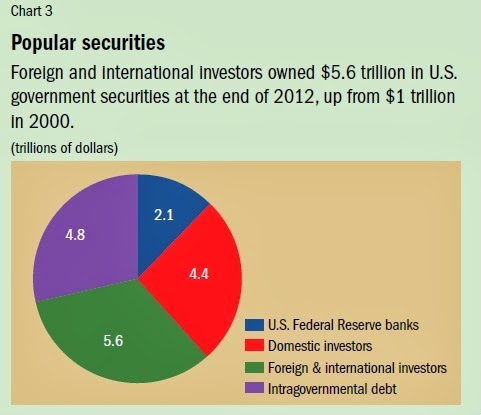 Many foreign investors, including governments, have expressed concerns about being so heavily invested in U.S. dollar assets. They worry that if inflation does rise, the real value of their debt holdings would decline. As Prasad writes:

"Still, emerging market countries are frustrated that they have no place other than dollar assets to park most of their reserves, especially since interest rates on Treasury securities have remained low for an extended period, barely  keeping up with inflation. This frustration is heightened by the disconcerting prospect that, despite its strength as  the dominant reserve currency, the dollar is likely to fall in value over the long term. China and other key emerging  markets are expected to continue registering higher
productivity growth than the United States, so once global financial markets settle down, the dollar is likely to return  to the gradual depreciation it has experienced since the early 2000s. In other words, foreign investors stand to get a  smaller payout in terms of their domestic currencies when they eventually sell their dollar investments.

Here's a figure from the ever-useful FRED website run by the St. Louis Fed showing the overall sag of the U.S. dollar over time, with some notable bumps in the road along the way. 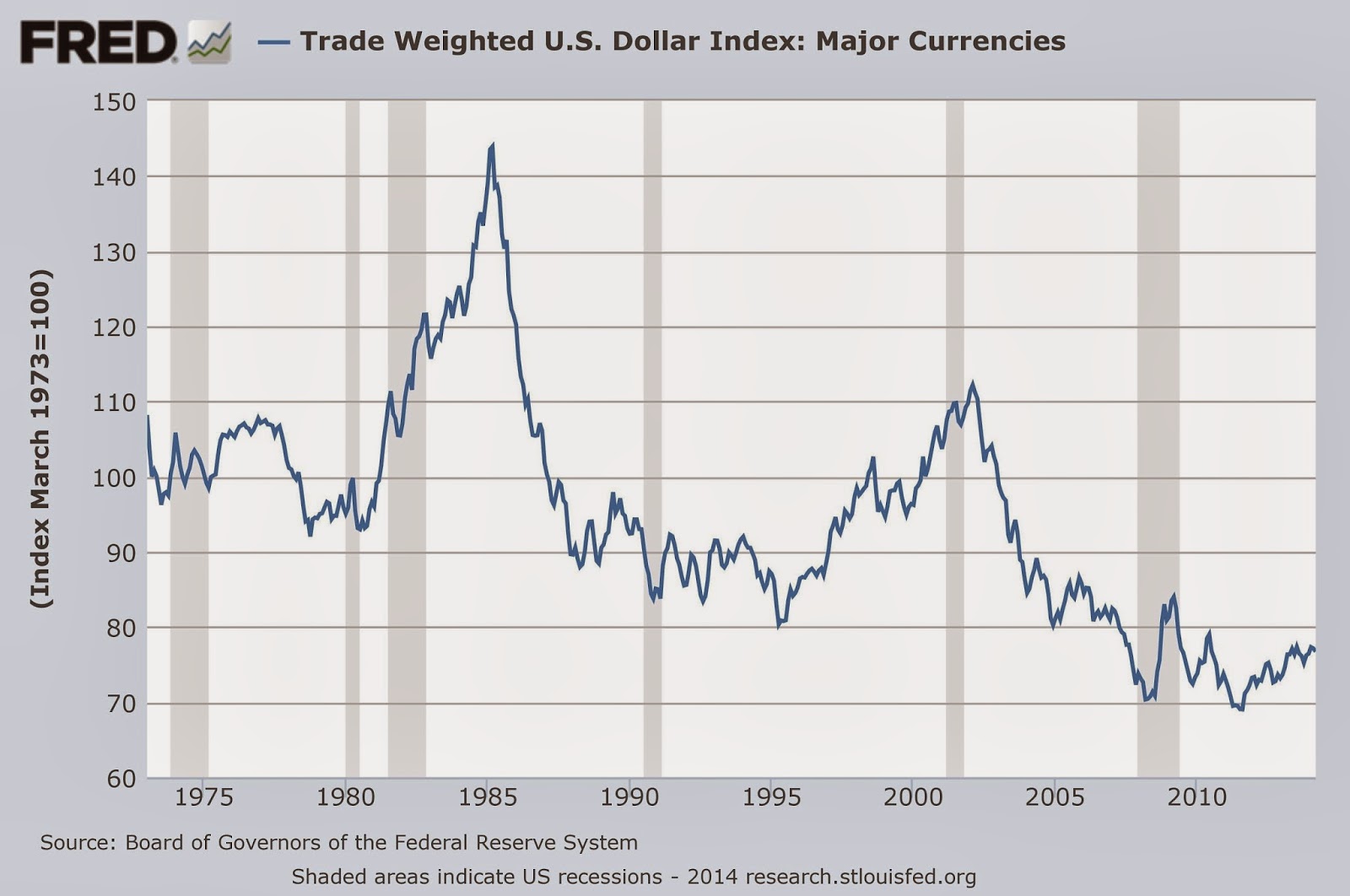 Over time, one would expect the role of the U.S. dollar to decline as the global reserve currency. Other economies are growing faster. More closely integrated global financial markets are making it easier to carry out transactions that don't involve the U.S. dollar. But the typical predictions, from Prasad and others, is that the dollar will remain dominant not just for a few more years, but perhaps for a few more decades. Part of the reason is that no clear alternative is available. Some well-informed folks continue to doubt whether the euro can survive. China's economy is headed for being the largest in the world, but as Prasad judiciously writes, "the limited financial market development and structure of political and legal institutions in China make it unlikely that the renminbi will become a major reserve asset hat foreign investors, including other central banks, turn to for safekeeping of their funds. At best, the renminbi will erode but not significantly challenge the dollar’s preeminent status. No other emerging market economies are in a position to have their currencies ascend to reserve status, let alone challenge the dollar."

For those with an appetite for more on this subject, Prasad has just published a book on the subject,
The Dollar Trap: How the U.S. Dollar Tightened Its Grip on Global Finance. I can also recommend Barry Eichengreen's book on the subject, Exorbitant Privilege: The Rise and Fall of the Dollar and the Future of the International Monetary System, which offers additional historical perspective.