Teen birthrates in the United States have been falling for two decades--and falling at a faster rate in the last few years. Melissa S. Kearney and Phillip B. Levine explore possible reasons why in "Teen Births Are Falling: What’s Going On?" written as as March 2014 Policy Brief for the Economics Studies group at the Brookings Institution. Here's the trend: To be sure, the U.S. teen birthrate remains well above that of most other high-income countries, where, as Kearney and Levine point out, the teen birthrate is usually in the range of 5-10 births per 1,000 women aged 15-19. Still, the teen birth rate in the U.S. has fallen by half in the last couple of decades. What might be the underlying causes?

There are three possibilities: teens having sex less often, teens who are having sex using contraception more often, and a higher number of abortions. The abortion rate among teens has not risen in a way that would explain the fall in teen births, so Kearney and Levine focus on the first two causes. They sum up their overall perspective in this way (citations omitted for readability):

"To some extent, it is appropriate to consider teen childbearing to be the result of “non-decisions;” some teens are sufficiently ambivalent about becoming pregnant that they do not commit themselves to taking precautions against such an outcome. To illustrate this point, half of teens who report having an unintended pregnancy were not using contraception at the time of conception. This way of thinking about the issue allows for individual error and randomness in the process, but
ultimately considers that individuals – even teens – respond to the environment around them and make choices that either increase or decrease the likelihood of becoming a teen parent. Indeed, the data suggest as much, with teen childbearing rates rising and falling with environmental factors in systematic ways."

In ongoing research, they look at a number of these different environmental factors at the state level: different kinds of state sex education programs, from abstinence to contraceptive education; expansions of Medicaid that cover contraception or post-partum care for broader income groups; welfare payments; state abortion rules like waiting times or parental consent rules; child support enforcement; state unemployment rates, and more. These conditions will vary across states, and they are enacted at different times in different states. So you can do a statistical test to see how much of the variation across states in teen birthrates can be explained by these factors. The answer is "very little." They write: "We found that declining welfare benefit levels and expanded access to family planning services for lower income women through the Medicaid program were the only two
policies to have had a discernible effect. However, their effect is limited: we calculate that these two policies together account for only 12 percent of the reduction in teen childbearing between 1991 and 2008. Our analysis yields no evidence suggesting that other policies had a significant role in the decline."

Thus, if state-level differences are not the main factor, the next place to look is in broader economic or social patterns across states. In addition, these need to be factors that apply through both good and bad economic times over the last couple of decades. Indeed, although the U.S. has the highest rate of teen births across high-income countries, the rate of teen births has been falling in most countries, which suggests that at least some of the causes are broader than U.S. policies or socioeconomic conditions. 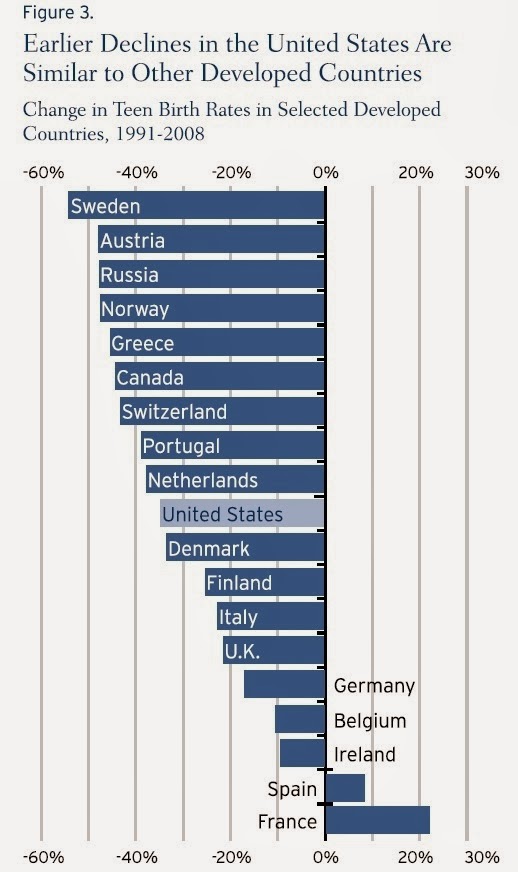 Kearney and Levine point to a few factors that have probably hastened the decline in the U.S. teen birth rate in recent years: in particular, the popularity of the TV shows 16 and Pregnant and Teen Mom, as well as the overall pattern that teen birth rates tend to be lower when unemployment is higher. But in terms of explaining the long-term trend, and the broader trend across countries, they readily admit that the evidence in not yet conclusive, but end up focusing on two factors:

"We speculate that there are two likely candidate explanations: (1) access to improved contraceptive technologies, most notably long-acting reversible contraception (LARCs) such as implants and intrauterine devices (IUDs) and (2) increased educational attainment along with better labor market prospects for young women. ... The policy challenge that we believe offers the greatest potential is to address the needs of those young women who are not committed to avoiding a pregnancy. These are teens whose views are characterized by ambivalence. For them, the issue is more about finding ways to make them want to avoid a teen birth. ...  Simply put, increased aspirations and expanded opportunities for young women have the potential to extend the downward trend in teen childbearing."

For those interested in this topic, and especially in unravelling the difficult questions of whether teen pregnancy causes poor economic outcomes or poor economic outcomes lead to more teen pregnancy, and why teen pregnancy rates vary across countries and U.S. regions, I recommend an article by Kearney and Levine in the Melissa S. Kearney and Phillip B. Levine tackle these questions in"Why is the Teen Birth Rate in the United States So High and Why Does It Matter?" which appears in the Spring 2012 issue the Journal of Economic Perspectives. (Full disclosure: I've been Managing Editor of the JEP since 1987, and so am predisposed to believe that all article in the journal are well-exposited and of considerable interest.)