The Decline of U.S. Entrepreneurship

U.S. entrepreneurship is on a downward trend, and has been so for several decades. Ryan Decker, John Haltiwanger, Ron Jarmin, and Javier Miranda offer an overview of the evidence in "The Role of Entrepreneurship in US Job Creation and Economic Dynamism," appearing in the Summer 2014 issue of the Journal of Economic Perspectives.  The authors write: "Evidence along a number of dimensions and a variety of sources points to a US economy that is becoming less dynamic. Of particular interest are declining business startup rates and the resulting diminished role for dynamic young businesses in the economy." What is some of this evidence?

There is no official data on "entrepreneurship." Thus, the data on the size and age of firms needs to be treated with care. For example, a big company opening up one more store certainly isn't what most of us mean by an "entrepreneur." Nor is a new company formed because of a merger or a spin-off from existing companies. In addition, not all small firms are what we commonly think of as entrepreneurs. For example, many small family-run companies have been around for a substantial period of time, and don't really expect to experience large-scale growth. Thus, Decker, Haltiwanger, Jarmin and Miranda focus on the data on the age of firms, and they strip out new firms created out of old ones. When the data is sliced in this way, the note that business startup rate is down (citations omitted).

Two of the biggest problems for the U.S. economy in recent years are a slow pace of job creation and a slow pace of productivity growth. Entrepreneurship is closely linked to both. New firms and young firms as a group have traditionally played a major role in the creation of new jobs. The authors point to an "up-or-out" dynamic where many new firms fail, but those who succeed have a lasting effect.


"For new firms (that is, those with age equal to zero in the Business Dynamics Statistics) ... their net job creation is also 2.9 million jobs per year. Over these 30 years [from 1980 to 2010], average net job creation in the entire US private sector was approximately 1.4 million jobs per year. The implication is that cohorts of firms aged one year or older typically exhibit net job declines. ... For any given cohort, jobs lost due to the high failure rate of young firms are almost offset by the growth of the surviving firms. Five years after the entry of a typical cohort, total employment is about 80 percent of the original employment contribution of the cohort—in spite of losing about 50 percent of the original employment to business exits."

Moreover, young firms are not only more likely to have high productivity than existing firms, they also create competitive pressure on existing firms to keep measuring up.

Ian Hathaway and Robert Litan present some complementary evidence on the U.S. decline in entrepreneurship in "The Other Aging of America: The Increasing  Dominance of Older Firms," a discussion paper just released by the Brookings Institution. Here's one figure showing that older firms are a rising share of US firms in recent decades, while younger firms are a smaller share of firms. The second figure shows that a greater share of US employment is now at older firms, rather than at younger ones. 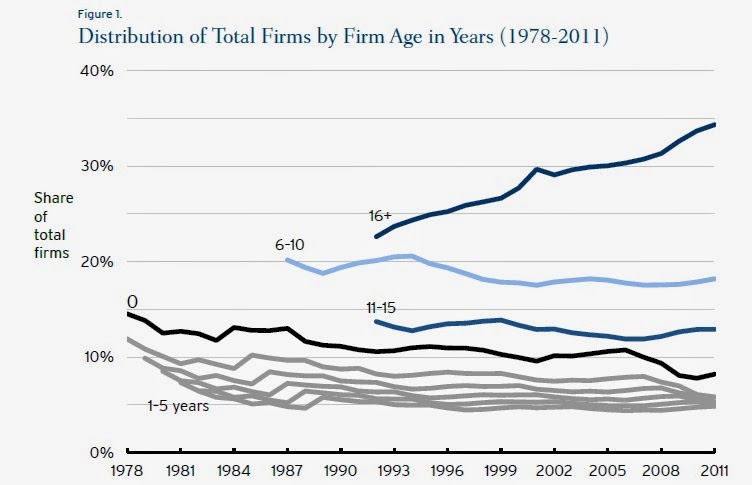 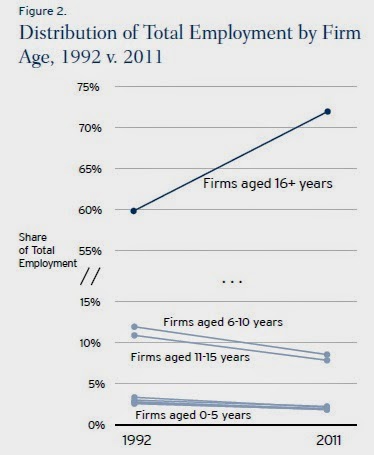 The public policy issues of how to increase the rate of business start-ups--which needs to involve thinking about how a wide variety of government rules and laws on hiring, production, and land use can create unnecessarily high hurdles for entrepreneurs--needs to wait for another day. Decker, Haltiwanger, Jarmin, and Miranda point out that the start-up rate is falling, and Hathaway and Litan offer a figure showing that it's a lack of start-ups, not a greater chance of failure, which is whittling down the role of young firms in the U.S. economy. 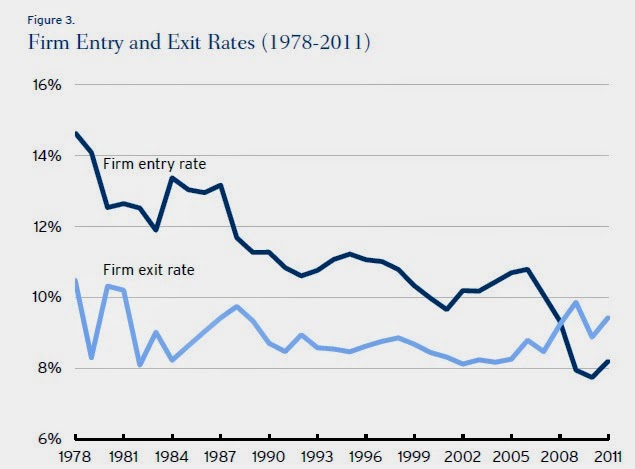 (Full disclosure: I've been Managing Editor of the JEP since the first issue in 1987. All JEP articles back to the first issue are freely available on-line, compliments of the American Economic Association.)
Posted by Timothy Taylor at 11:31 AM