The Enigma of Russia's Economy

The usual and most basic starting point to understanding a national economy is to look at trends and patterns over a long period of time, and then to look at episodes of divergence from those long-term trends. But applying this most basic analysis to Russia's economy doesn't work well.

For starters, that economy underwent a dramatic transformation in 1991, when the Soviet Union broke up into constituent parts and the economy moved away from central planning. It simply isn't meaningful to compare pre-1991 economic statistics generated by the intentions of central planners to post-1991 economic statistics based on the results of market patterns. Moreover, in the less-than-quarter-century one can search for long-run patterns in Russia's economic statistics, the economic data is dominated by short-term factors: Russia's bumpy transition away from central planning in the 1990s; its debt default in 1998; the ongoing contraction in the rule of law after Vladimir Putin became president in 2000; the take-off in global oil prices in the 2000s, which greatly benefited Russia as an oil exporter; and the effects on Russia of the global financial crisis around 2008-2009. 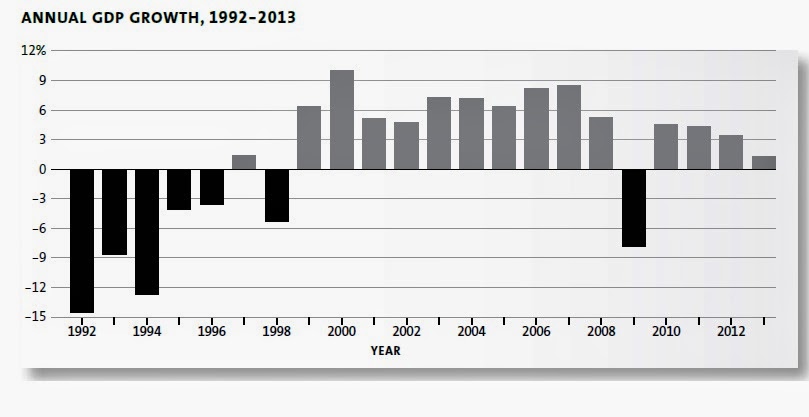 A recent IMF study trying to identify Russia's growth patterns put it this way: "Russia’s trend growth is volatile. The transition from a centrally planned to a market economy started in 1991, hence time series are relatively short compared to other countries. The size and depth of structural reforms during the 1990’s, the financial crisis and default in 1998, followed by the oil boom in the 2000’s, and subsequent GFC [global financial crisis], make identification of a stable “long run” growth trend a very hard task."

But with these deep uncertainties about understanding the underlying path of Russia's economy duly noted, it seems plausible that Russia's economic growth is struggling. The chart above showing rates of economic growth shows slower growth since the 2008 downturn, and especially slow growth in 2013.
Gaddy and Ickes write: "In the final months of 2013, before the confrontation created by the annexation of Crimea, Russia’s leaders were focused on a different crisis: the surprising and disturbing fact that an economy they thought was going to grow at 4 percent might not even expand by 1 percent. This “growth crisis” sparked heated exchanges –but no consensus – about how to restore momentum to the economy."

The IMF report says it this way: "[T]he Russian economy appears to be operating close to full capacity, amid weak investment, and low growth." With a low birthrate, ill-health, and an aging workforce, Russia's workforce is declining, and will fall by about 20% between 2005 and 2025. Here's a workforce figure from the IMF: 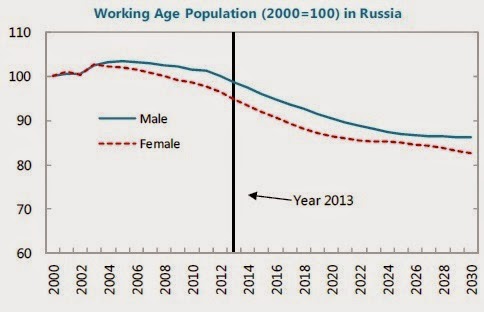 One way to get a sense of the dismal state of Russia's private sector is to look at the ratio of stock price to earnings for Russian companies. For the stock markets of emerging market economies as a whole, the price/earnings ratio is about 12. As one example, the stock market of Zimbabwe has a price earning ratio of 12. However, in the stock markets of economies like Iran, Argentina, and Russia, the price/earnings ratio is about 5-6. In other words, when investors look at earnings from a Russian company, they are much less certain than they would be when thinking about the typical emerging market economy about whether those earnings reflect an underlying economic reality (as opposed to a set of accounting tricks), or whether the profits are likely to continue.

As Gaddy and Ickes add: "Today’s experts pose no similar threat, since their “great ideas” will never be put into practice." (If this sort of humor appeals to you, an earlier post with some of the old jokes about the Soviet economy is here.)

Gaddy and Ickes conclude: "Russia does face a growth crisis. This is just dawning on people. It should have been recognized earlier. It wasn’t, because several years of growth produced by the oil-price induced transfer of wealth to Russia from the outside were mistaken for “normal” growth. ... Today, many compete in proposing magic solutions to return to growth, proposals that are not feasible economically or politically. Meanwhile, there is one path that is both: the resource track." In other words, they suggest that the main economic option for boosting growth that might also be politically acceptable is to open up to foreign investment in the energy

Russia's shaky economic prospects matter more broadly than just to the Russian people. Since 2000, Vladimir Putin has mostly been able to cut an implicit deal with the Russian people. On one side, freedom, the rule of law, and democracy are curtailed. On the other side, compared to the 1990s when Russia was in shock from the dissolution of the Soviet Union, Putin offered an economy that was growing, not shrinking, and asserted a more active role for Russia as a player in international relations. There are doubtless a lot of reasons why Russia under Putin has been pushing the boundaries of acceptable international behavior in recent years, before trampling those boundaries altogether in Ukraine. But surely one contributing reason is that when Putin is providing less in terms of domestic economic growth, he feels some pressure to raise the decibel level on Russian assertiveness in international affairs.