Back in the old days of the Soviet Union, it was often useful to complement the theoretical discussion of dysfunctional incentives in the planned economy with a mixture of jokes and anecdotes. Perhaps the best-known one-line was muttered by Soviet workers everywhere: "We pretend to work, and they pretend to pay us." The old line came to mind when reading some of the anecdotes in an article in the Economist magazine of June 14, about "Industry in Russia: Lurching into the Fast Lane."

"A conscientious Swede, Mr Andersson insisted on zero tolerance for corruption. For a Russian factory this was a tall order. But he has got rid of various “managers” who ran businesses on the side, helping themselves to GAZ’s supplies. He has introduced bonuses for workers who turn up sober and refrain from stealing, and the sack for those who do not. Thousands of surplus workers have been laid off; more will follow. This has not made Mr Andersson popular in Nizhny; hence the bodyguard who accompanies him everywhere, even inside the plant. GAZ is now in profit and producing double its 2009 output, despite cutting its workforce by half to 23,000, says Mr Andersson. In 2010 only 16% of vans rolling off the line were fit to be sent out without remedial work; that is now up to 64%."

There's also a tell-tale graphic about the costs of building a road, in millions of dollars per mile. Low wages would help to explain why it's less expensive to build a road in China. But wages in Russia are lower than in the U.S. or the 27 countries of the European Union. 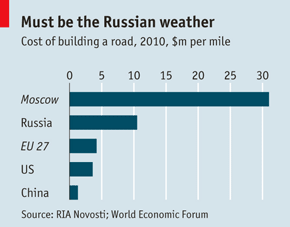 There were stories that factories producing televisions sometimes shipped only the external case, with and no electronics inside, because they were desperate to meet the official quota for production of television sets. When Soviet companies did produce actual televisions, the quality control issues were legendary. In one company, 70% of the televisions produced failed quality control checks. Those televisions that escaped the factory tended to explode. One study blamed most of the apartment fires in Moscow on exploding televisions.


Jokes were a way of letting off steam. Here are a few from my old lecture notes:

At the annual May Day parade in Moscow, there was a long parade of marching soldiers, followed by tanks, missiles, and other weapons. Then right at very back of the parade there are a few open trucks, carrying a group of middle-aged men wearing badly-fitting grey suits. Up on the podium, reviewing the parade as it goes by, one of the senior Communists looks at the person next to him and says: "So who are those men and why are they in the parade?" And the other responds: "Ah, they are economists from the central-planning bureau. You've no idea how much destructive capacity they possess."


Did you know that Adam was the first Communist? Who else would walk around stark naked, holding a single apple, and believe he was in Paradise?


My old notes also have a quotation from Condoleeza Rice, a Soviet expert later to become Secretary of State, back in 1991: "Think about the Great Depression in this country and multiply that by a hundred. Add to that the crisis of legitimacy and authority that the United States had between 1968 and Watergate. Add to that questions that we had about whether the Union ought to stay together just before the Civil War. Multiply that by one hundred, and then you've got a fix on what the Soviet Union's problem is."


Truly, modern Russia under Vladimir Putin has all sorts of troubles: economic, political, and social. But it is still a considerable improvement over what came before.
Posted by Timothy Taylor at 6:00 AM