Sallie Mae started off its existence back in the early 1970s as a government-sponsored enterprise aimed at organizing financial support for student loans. It was officially privatized, with all official links to the government cut, in 2004. The company website reports that the "company and its subsidiaries manage or service $234 billion in education loans and administer $38 billion in 529 college savings plans." For the last five years, Sallie Mae has published an annual study based on survey data called "How America Pays for College." This year's report highlights the stresses that are arising between high costs of higher education and households under financial stress on the other hand. Here are some points that caught my eye.

How are the sources of this funding changing in the last few years? Here's a figure showing the sources of funding and how they have changed in the last five years: below the figure, I'll list three major changes as described in the the report. The short story is that parents are paying less and grants and scholarships are covering less, but student loans and work are on the rise. 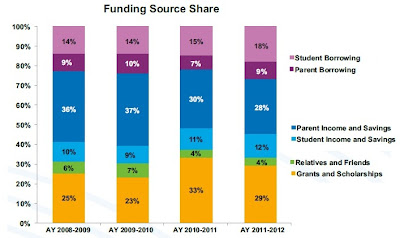 "Second, in 2012, fewer families utilized scholarships: 35 percent of all families in 2012, down from 45 percent in 2011. This decline may be because colleges are unable to maintain previous award levels. ... As a percentage of total college costs, grants and scholarships covered 29 percent of college expenditures in 2012, a higher share than in 2009 or 2010, but lower than last year. ..."

"Third, students paid more out of pocket, partially offsetting decreases in parent and scholarship contributions. This year, students picked up an increased share of their college costs through their own savings and income, contributing on average $2,555 in 2012 (12% of the total cost of college). In addition to contributing more from their savings and current income, students borrowed more in 2012 than in previous years. In 2012, students contributed 18 percent of the total cost of college through borrowing ... The continuing upward trend in the percent of students using federal student loans has driven most of the increase in student borrowing, which has grown from 25 percent in 2009, to 28 percent in 2010, to 30 percent in 2011, and to 34 percent in 2012. This year, high-income students in particular increased their use of federal loans substantially — 27 percent used federal loans in 2012, up from 19 percent in 2011. In addition, the average amount students borrow from federal loans has risen substantially (55%) over the last five years, to $7,874 in 2012 from $5,075 in 2008."

For some earlier posts about financing higher education, see: