The Pew Center on the States has published "The Widening Gap Update" about the shortfalls between what state pension funds have promised and the actual funds on hand. The report also includes some useful information on the extent to which states are prefunding their health care plans for retirees. The report makes for grim reading--and even so, it's probably over-optimistic. 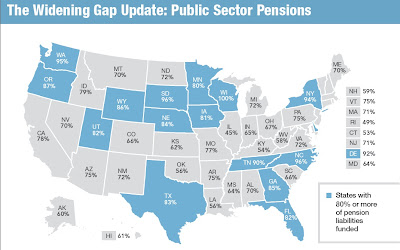 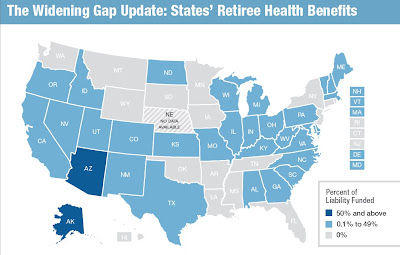 Many states have negotiated unrealistic promises, and those promises are unlikely to be kept in full. Indeed, Pew calculates that from 2009-2011, 43 states changed their pension plans to hold down future costs."The most common actions included asking employees to contribute a larger amount toward their pension benefits; increasing the age and years of service required before retiring; limiting the annual cost-of-living (COLA) increase; and changing the formula used to calculate benefits to provide a smaller pension check."

These changes mostly affect current employees who have not yet retired, but not always. "Since 2010, 10 states—Arizona, Colorado, Florida, Maine, Minnesota, New Jersey, Oklahoma, Rhode Island, South Dakota, and Washington—have frozen, eliminated, or trimmed their annual COLA
increase for current retirees."

A shortfall of $1.38 trillion is obviously enormous, but it also substantially understates the size of the gap. To figure out whether states have set enough money aside for future payments, it's necessary to make some assumption about what return will be earned by the money that has been set aside. Most states assume an average return of 8% per year--which seems pretty optimistic, and lets the states get away with putting much less money aside in the present. A more realistic rate of return would make state pension plans look perhaps one-third less well-funded. Here's Pew:


"The pension ratings are based on a state’s projected investment rate of return, which for most states is 8 percent. States factor in their expected investment gains when they estimate how much they need to set aside. The Governmental Accounting Standards Board (GASB) is considering new rules that would prompt many states to use a lower rate of return to estimate their bill coming due, which would increase the liabilities states acknowledge. If these rules are adopted, as expected, retirement plan funding ratios would drop, increasing reported pension plan shortfalls. The Center for Retirement
Research at Boston College analyzed a database of state and local plans and found that if the new rules had been in effect in 2010, those plans’ funding levels would have dropped from 77 percent funded to 53 percent."