The number of new reverse mortgages in the U.S. was below 10,000 per year in the 1990s. But now the baby boomers are reaching retirement age. The number of reverse mortgages topped 110,000 in both 2008 and 2009, before dropped back to a range of 70,000-80,000 in 2010 and 2011. As the economy regains its footing, the total may start rising again. Thus, one small part of the Dodd-Frank legislation was to instruct the newly-created Consumer Financial Protection Bureau (CFPB) to publish a study on "Reverse Mortgages," which was published in late June.

What exactly is a reverse mortgage? Here's an explanation:

"A reverse mortgage is a special type of home loan for older homeowners that requires no monthly mortgage payments. Borrowers are still responsible for property taxes and homeowner’s insurance. Reverse mortgages allow seniors to access the equity they have built up in their homes now, and defer payment of the loan until they die, sell, or move out of the home. Because there are no required mortgage payments on a reverse mortgage, the interest is added to the loan balance each month. The rising loan balance can eventually grow to exceed the value of the home, particularly in times of declining home values or if the borrower continues to live in the home for many years. However, the borrower (or the borrower’s estate) is generally not required to repay any additional loan balance in excess of the value of the home."

Reverse mortgages have been around for several decades. They have a fairly small share of the market: "Today, the market for reverse mortgages is very small. Only about 2 to 3 percent of
eligible homeowners choose to take out a reverse mortgage.  Only about 582,000 HECM [Home Equity Conversion Mortgage] loans are outstanding as of November 2011, as compared to more than 50 million traditional mortgages and more than 17 million home equity loans and lines of
credit." But the number of such loans was rising fast before the recession hit, and remains far above levels from just 10 years ago. 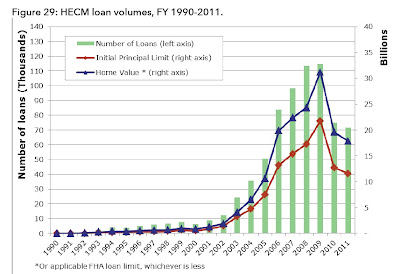 For many borrowers, a reverse mortgage can offer a useful tool so that they can receive income while continuing to live in their house. As the CFPB report explains: "The original purpose envisioned for reverse mortgages was to enable older borrowers to convert home equity into cash they could use to help meet expenses in retirement. Borrowers could choose between an income stream for everyday expenses, a line of credit for major expenses (such as home repairs and medical expenses), or a
combination of the two. It was anticipated that most, though not all, borrowers would use their loans to age in place, living in their current homes for the rest of their lives or at least until they needed skilled care. Upon the borrower’s death, or upon leaving the home, the borrower or the estate would sell the home to repay the loan and would receive any remaining home equity."


But when a loan has the property that you may never need to repay it, that loan has some potential to be used in a way that the borrower will later come to regret. Here are a few signs that at least make made me raise my eyebrows:

For many people, the equity in their home is their ultimate buffer to help them out later in life. If you take that buffer and spend it during your 60s, you (or your spouse or children) may well end up regretting it in later years. It turns out that many of those who take out a reverse mortgage are using it to pay off their existing mortgage. But a situation can easily arise where the interest rate being paid on the reverse mortgage is greater than the interest rate that is earned by re-investing the lump sum that is received, or even would have been paid on just keeping the existing conventional mortgage.

My first instinct is to have rules about providing information accurately, and then to let people make their own financial choices. But I've also seen my own grandparents, as well as aging relatives of my friends, reach an age where they would have been quite vulnerable to someone telling them "the smart thing to do" and offering the siren call of a large check that wouldn't ever have to be repaid.  The reverse mortgage market is likely to grow rapidly as the boomers age. It's going to offer a useful product for many, and some ugly scandals and frauds for others.