When is the Financial Industry Too Big?

It's a standard lesson in development economics that "financial deepening," which refers to growth and sophistication of the financial sector, helps economic growth. But in looking at the events leading up the Great Recession, it certainly looks at first glance (and second and third glance, too) that the financial sector ran amok. Is there a point where the financial sector gets too big? Stephen Cecchetti asks this question in a provocative short paper that kicked off the the 11th Annual BIS Conference  on the theme "The Future of Financial Globalization."

Here's Cecchetti laying out the basic theme that finance is useful in building growth--until it isn't.

"We teach that, because it allocates scarce resources to their most efficient uses, one of the best ways to promote long-run growth is to promote financial development. And, a sufficiently well-developed financial system provides the opportunity for everyone – households, corporations and governments – to reduce the volatility of their consumption and investment.

"It sure sounds like finance is great. But experience shows that a growing financial system is great for a while – until it isn’t. Look at how, by encouraging borrowing, the financial system encourages an excessive amount of residential construction in some locations. The results, empty three-car garages in the desert, do not suggest a more efficient use of capital!

"Financial development can create fragility. When credit extension goes into reverse, or even just stops, it can induce economic instability and crises. Bankruptcies, credit crunches, bank failures and depressed spending are now the all-too familiar landmarks of the bust that follows a credit-induced boom.

"What is more, financial development is not costless. The expansion of finance consumes scarce resources that could be used elsewhere. And finance’s large rewards attract the best and the brightest. When I was a student, my classmates dreamed of curing cancer, unifying field theory or flying to Mars. Those in today’s cohort want to become hedge fund managers. Given finance’s booms and busts, is this the most efficient allocation for such scarce resources? I doubt it. So, when does financial deepening turn from good to bad and become a drag on the economy?"

To tackle this question, Cecchetti provides some key figures from a January 2012 working paper co-authored with Enisse Kharroubi. Their approach starts by collect data on the size of finance in an economy, which they measure by the share of employment and the share of value-added happening in the financial sector. They collect this data for 16 OECD countries from 1980 to 2009. They also collect data on labor productivity growth. They then estimate regressions with productivity growth as the dependent variable, one of the measures of the size of the financial sector as an explanatory variable, and controlling for level of investment, employment growth, openness to trade, initial labour productivity, and country-specific dummy variables. 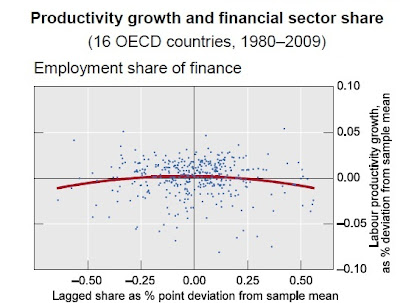 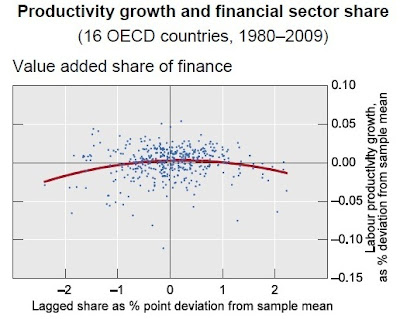 As Cecchett summarizes: "[T]he conclusion emerges that there is a point where both financial development and the financial system’s size turn from good to bad. That point lies at 3.2% for the fraction of employment and at 6.5% for the fraction of value added in finance. Based on 2008 data, the United States, Canada, the United Kingdom and Ireland were all beyond the threshold for employment (4.1%, 5.7%, 3.5% and 4.5%). And the United States and Ireland were also beyond the threshold for value added (7.7% and 10.4%)."

In another calculation, Cecchetti finds that when the financial sector is growing faster, growth is slower: "Faster-growing financial employment hurts average productivity growth, as does “too much” value added. In particular, a 1 percentage point increase in the growth rate in finance’s share of employment cuts average productivity growth by nearly one-third of one percentage points per year."

Cecchetti summarizes the overall findings this way: "Combined, these facts lead to the inescapable conclusion that, beyond a certain point, financial development is bad for an economy. Instead of supplying the oxygen that the real economy needs for healthy growth, it sucks the air out of the system and starts to slowly suffocate it. Households and firms end up with too much debt. And valuable resources are wasted. We need to do something about this."

I have less confidence in this evidence than Cecchetti seems to have (although in fairness, he is giving opening remarks at a conference and hoping to spur discussion). It is notoriously difficult to draw strong inferences about cause-and-effect from a panel of cross-country data.  The economies of these 16 countries, and the development of their financial sectors, are surely influenced by a number of other events and variables. Perhaps it's not the sheer size of the financial sector, but some other characteristic of the financial sector. But with a certain degree of explanatory froth, the bottom line that growth of financial markets will not always benefit an economy certainly seems plausible.