The headline measure of U.S. labor markets, the unemployment rate, remains dismally high. It rose above 8% in February 2009, and so as of June 2012, it has now been above 8% for 41 months. The unemployment rate had been tiptoeing downward from its peak of 10.0% in October 2009 to 8.3% in January 2012. However, even that modest rate of decline seems to have levelled off, with an unemployment rate of 8.2% in June 2012.


However, under the headline unemployment rate, more detailed labor market data from the Bureau of Labor Statistics shows signs of improvement. Here are three examples from the July 2012 data on the Job Openings and Labor Turnover Survey). 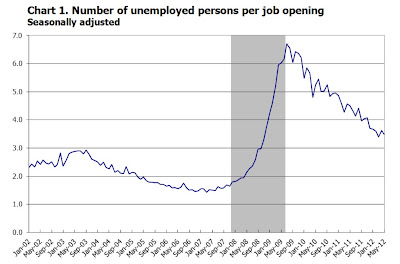 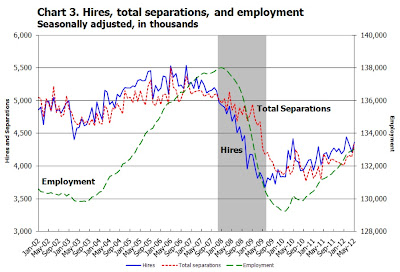 One last slice of these more detailed labor market numbers is to break down those who lose jobs into two categories: quits and layoffs/discharges. In a fairly healthy labor market, like the mid-2000s, quits in which people leave jobs voluntarily (often for an alternative job) are higher than layoff/discharges, where people lose their job involuntarily. In the recession, quits drop dramatically, because people were more motivated to stick with the job they had, while layoff/discharges rose as firms in trouble let workers go. More recently, the level of layoffs/discharges has dropped back to pre-recession levels. Quits have risen, which is a sign that alternative jobs are becoming more available. Although quits aren't back to pre-recession levels, they are again exceeding layoffs/discharges. 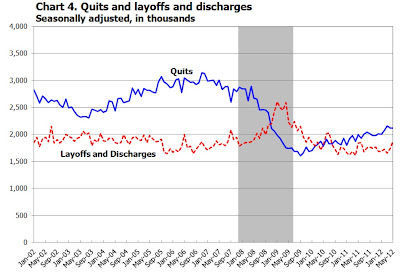