Comparing Cities and Countries by Size of Economy

When we refer to an "economy," we are often talking about a national economy, or in some cases the global economy. But of course, local economies operate as well. In fact, $13.1 trillion of the total U.S GDP of $14.5 trillion in 2010--roughly 90%-- happened in urban economies.

In the table below, the first column lists the 20 largest U.S. metropolitan areas (which are broader than official city boundaries) ranked by size of the metro-area economy, while the second column shows the gross metropolitan product of those cities in 2010, using data from the U.S. Bureau of Economic Analysis. Just because comparisons like this always scramble my brain a bit, the last column shows some cities and countries of comparable economic size around the world. The city data is for 2008 data from a PriceWaterhouseCooper report. The estimates of country GDP are for 2010 from the World Bank. 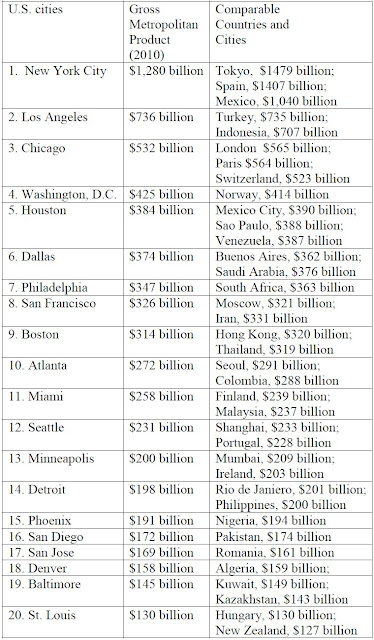 At least for me, these kinds of intuition don't always fit my pre-existing intuitions. Now and again, it's useful to align one's thought with the data! For example: