Like a lot of teachers of economics, I have a riff about the deregulation of various industries in the late 1970s and early 1980s. For example, the Motor Carrier Act of 1935 allowed the Interstate Commerce Commission to set prices and limit entry for the trucking industry. However, in the 1970s Presidents Ford and Carter started appointing commissioners to the ICC who favored more deregulation, and the Motor Carrier Act of 1980 gave them the power to decontrol trucking.

Deregulation of industries at around this time (not just trucking, but also airlines, rail, banking, natural gas, and others) turned out to be a boon to consumers and innovation. For those who want the overall story, Clifford Winston had a nice overview of "U.S. Industry Adjustment to Economics Deregulation" in the Summer 1998 issue of my own Journal of Economic Perspectives. The Concise
Encyclopedia of Economics has a short article by Thomas Gale Moore on the history and benefits of "Trucking Deregulation" here.

The short story is that after decades of regulation that had set prices and blocked entry and exit, trucking was ready to evolve. Winston notes that the trucking industry traditionally has two parts:
"‘less-than-truckload' (LTL), which uses a network of terminals to consolidate shipments of more than one shipper’s goods on a truck, and `truckload' trucking, which provides point-to-point
service for one shipper’s goods that fill an entire truck." In addition, some firms provide their own trucking services, while other firms contract for that service. Winston cites evidence that after deregulation, trucks carried fuller loads and service times improved. Costs and prices in the LTL segment dropped 35%; costs and prices in the truckload segment dropped 75%.

However, my riff on the effects of deregulation s largely draws on evidence from the 1980s and 1990s. I have no clear idea what's up with the trucking industry these days. As a starting point to getting me back up to speed, I was delighted to see the article by Nancy Condon called "Truckonomics: An Industry on the Move" that appeared in the Second Quarter 2012 issue of Econsouth, published by the Federal Reserve Bank of Atlanta. It has lots of intriguing tidbits:

The tonnage of goods carried by trucks is sometimes used as an indicator for the overall health of the economy. Thus, it's interesting that as of early 2011, truck tonnage had regained its pre-recession level. 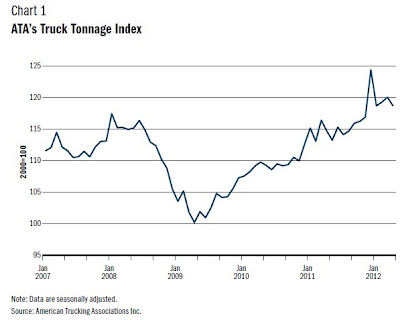 In thinking about main concerns for the trucking industry looking forward, fuel prices do not seem a major concern, because truckers can typically pass along fuel costs to consumers. However, short-term price spikes can be a concern: "There is typically a 45- to 60-day lag between when the carrier makes a shipment and when the shipper pays the carrier for that shipment. If the shipper is paying a fuel surcharge based on the cost of fuel two months ago, and the prices are experiencing a double-digit rise, the carrier can be seriously harmed." (Of course, the economist in me notes that it is quite possible for even small companies to hedge against short-term price spikes, if they are really concerned about this risk.)

The two issues of greater concern are constraints on the capacity of the industry and a potential shortage of drivers in the future.

The issue of capacity for the industry grows out of decisions made back in 2006, when the industry was expecting "mandated decrease by the U.S. Environmental Protection Agency (EPA) in diesel
emissions for heavy-duty trucks, to take effect in 2007. So in 2006, many trucking companies conducted what is called a “pre-buy.” To avoid having to buy the upgraded, costlier trucks, they purchased inventory ahead of their normal schedule. So when the recession began in late 2007 and demand plummeted, these companies were left holding all their new equipment ... With so much excess capacity, truck values also plummeted and the companies ended up upside down (that
is, they had negative equity) on their equipment. When times are good, most companies run their trucks through the warranty period—about 48 months—and then buy new ones to replace the old. More recently, many companies have held onto their trucks longer than normal for several
reasons: they lost the equity in their trucks, did not have enough cash reserves, or could not get credit even if they did have equity. All these factors combined to increase the age of the fleet in
the postrecession industry. ... In 2011, the trucking industry was operating with 12 percent
fewer trucks than at the height of their business in 2006 ..." For now, capacity constraints are allowing trucking companies to raise their rates. But the demand for new trucks started rising again in 2011.

During the recession, and with fewer trucks on the road than several years ago, both the number of drivers and the number of recruiters has diminished. "What’s more, many of the largest truckload carriers in the industry—including Swift, headquartered in Phoenix, Arizona, and Schneider National Inc. in Green Bay, Wisconsin—had eliminated their driver training programs altogether." Employment in trucking hasn't yet recovered to its pre-recession levels, and the industry is apparently thinking about ways to find new drivers: looking to demographic groups not well-represented among truckers in the past like women, redesigning routes so that long-haul truckers don't have to be away from home so long, and building heavy-duty trucks with automatic transmissions, which are physically easier to operate than the old 13-speed transmissions. It looks likely that the trucking industry will be looking to hire those who have the necessary licenses in the next few years. 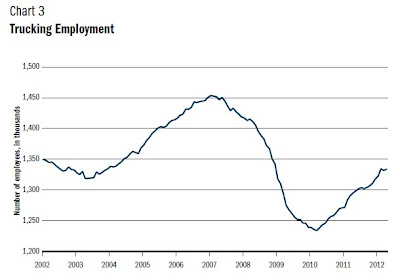