Some years ago I found myself giving a talk at a university in South Africa, where I discovered that I had apparently been typecast in the role of Defender of Capitalist and Colonialist Oppression. A commonly heard claim in the room was that the U.S. had a high standard of living mainly because it oppressed South Africa, and countries like South Africa. I found myself trying to explain the long-run roots of economic growth: growth of human capital, physical capital, and technology, operating in a market-oriented environment. I pointed out that in modern South Africa, the average adult at present had about 5-6 years of schooling. In the United States, there had been widespread primary schooling back in the mid-19th century, a "high school" movement that spread education further in the early 20th century, and the a burst of college enrollments after World War II. I pointed out that other countries during the last couple of centuries, including Japan and the East Asian "tigers" and China, all built their economic growth on base of expanded mass education. My point was not to deny that buying commodities cheaply has benefited the U.S. and other high-income economies, but to point out that economic growth and the resulting standard of living have roots so much deeper and broader than cheap commodities.

But the notion of a healthy and growing U.S. economy built on steadily rising levels of education is getting to be a few decades out of date. In the July 2012 issue of the Journal of Economic Literature, Daron Acemoglu and David Autor have a lengthy book review called, "What Does Human Capital Do? A Review of Goldin and Katz’s The Race between Education and Technology." (The  JEL is not freely available on-line, but many in academia will have access through their library.) The review makes a number of useful and sometimes subtle points about the interactions between education, skill, wages, inequality, and growth. Here, I'll just focus on their basic point about educational attainment in the United States.

High school graduate rates in the U.S. levelled out rose sharply in the first part of the 20th century, but levelled out several decades ago. They write: "Figure 7, which plots high school completion rates at age 35 by birth cohort for U.S. residents born between 1930 and 1975, shows that the secular trend increase in overall high school graduation rates prevailing since at least 1890 ... sharply decelerated
starting with the 1948 birth cohort and then plateaued with the 1952 birth cohort. It showed no trend improvement over the subsequent three decades." 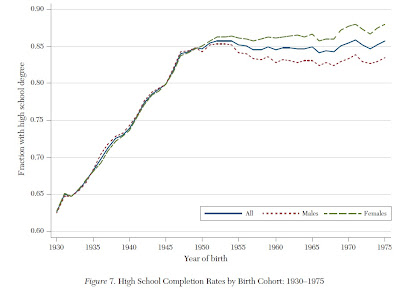 College graduation rates have risen a bit in recent decades, but the increased is completely due to gains in college graduation rates by women. Acemoglu and Autor write: "Figure 8, which
similarly plots college completion rates at age 35 by birth cohort, reveals an equally discouraging inter-cohort trend in college completions. The aggregate college graduate rate peaked with the 1951 birth cohort and did not begin to rise again until the 1966 birth cohort completed college.
Despite the surge in the college [wage] premium ... there has not been a robust supply response
among recent cohorts." 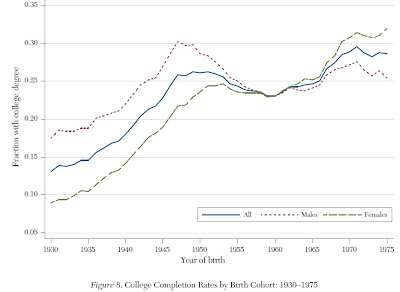 These graphs measure the quantity of people graduating, but there is little reason to believe that the quality of graduates is improving, either. Acemoglu and Autor: "[T]he United States is also lagging
behind in terms of school quality, particularly in K–12. Goldin and Katz are careful to note that AP calculus students in the United States compare favorably with the advanced mathematics students in almost any country, while the average U.S. student lags behind the average student in most OECD countries in math and science. This quality deficiency is almost as worrying as the lack of
progress in the high school and college graduation margin."


When I was arguing about comparative human capital trends in front of a university audience in South Africa, little was really at stake but debating points. But for the U.S. economy as a whole, the fact that educational achievement levels have flattened out in terms of quantity and quality, so that the U.S. is now falling behind in international comparisons, poses and enormous risk both for the distribution of gains across the U.S. economy and for long-term U.S. growth prospects.

For a couple of earlier posts on how other countries are outstripping the U.S. in college attendance, see my May 23, 2012, post here and my July 19, 2011 post here.  For a discussion of the causes of rising wage inequality that draws heavily on the Goldin-Katz argument, see my July 18, 2011, post here.  (Full disclosure: One of the authors of the JEL article, David Autor, is the editor of the Journal of Economic Perspectives, and thus he is my boss.)