Sustainability and the Inclusive Wealth of Nations

First there was gross domestic product, and it was useful, but limited. After all, it measured only economic output, and left out considerations like the health or education of the population, or the quality of the environment, or whether a country was investing enough to sustain continued growth in the future. In the Spring  2008 issue of my own Journal of Economic Perspectives, J. Steven Landefeld, Eugene P. Seskin, and Barbara M. Fraumeni offer a tour through the history and the estimation of this statistic in "Taking the Pulse of the Economy: Measuring GDP." The U.S. Bureau of Economic Analysis page for GDP is here.

Now the United Nations has taken another stab at developing a broader measure of economic performance, this one focused on sustainability. It appears as the Inclusive Wealth Report 2012, and is apparently intended to be an ongoing report in the future. The effort was led by Partha Dasgupta, who long ago in graduate school taught me pretty much everything I know about the details of welfare economics. The report seeks to construct an inclusive measure of total wealth. For this first report, the emphasis is on three categories: the total value of human capital, produced capital, and natural capital. (There are also supplementary calculations to expand these measures to consider technological productivity, carbon damages, and capital gains on oil reserves.) The notion is that a sustainable economy will be increasing its total wealth over time--which allows for the possibility that gains in human capital or produced capital would offset declines in natural capital.

For detail on how these numbers are constructed, you can look at the report and the supporting working papers. Here, I'll just say that human capital wealth is based on a mixture of statistics on mortality, employment, education, pay, divided by age and gender. Produced capital is based on levels of investment, depreciation, the lifetime of assets, output growth, and productivity. Natural capital looks at statistics and prices related to on fossil fuels, minerals, forests, agricultural land, and fisheries. These measures of wealth are compiled for 20 countries from 1990-2008.

Here's a figure showing the calculations for the United States. The rising top line shows the growth in physical capital wealth over time. The bottom declining line shows the drop in natural capital wealth. The blue-gray line in the middle shows the rise in human capital over time. The green line combines these into an overall Inclusive Wealth Index. The rising level of the inclusive wealth index implies that U.S. economic growth is sustainable, in the sense that the country's stock of wealth is rising. 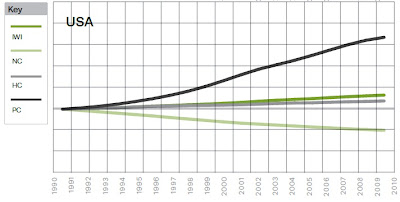 Compared to other advanced economies, the U.S. economy has a relatively high dependence on natural wealth and on human capital. Here's a graph for 2009. Compared to Norway, with its oil reserves, the U.S. economy relies less on natural capital. But relies more on natural capital than Japan, France, or the United Kingdom. The U.S. relies less on human capital than does the UK, but more than the other comparison countries here, which tend to rely more on physical capital.

Here is a figure showing the comparison for 1980-2009 for each of the 20 countries. For each country, the first bar combines annual growth rates for natural capital, human capital, and produced capital, as shown in the bar chart. The second bar for each country then shows the Inclusive Wealth Index. Among the top five countries on inclusive wealth, the growth of China, India, and Chile were  primarily driven by a rise in produced capital, while the growth of Germany and France were primarily driven by a arise in human capital.  The countries at the other end are largely resource exporters, and the decline in the value of their natural capital over time is not being offset by rises in human or produced capital. 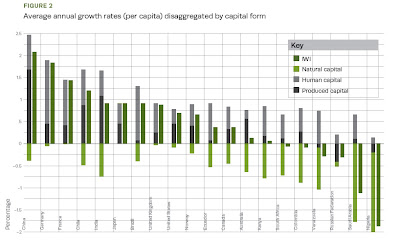 The authors of this first Inclusive Wealth Index would be the first to say that the measures will need to develop and evolve over time. Rather than pick nits with the index, I'll just say that when it comes to economic statistics, I'm a believer that "more is better." Reality is multidimensional, and additional statistics are often useful for highlighting particular dimensions that I had not considered sufficiently.