Distribution of Taxes in 2009: CBO

The Congressional Budget Office has put out another of its useful reports on the distribution of the tax burden across income levels: "The Distribution of Household Income and Federal Taxes, 2008 and 2009."  I suspect that many readers will see in these numbers an affirmation of their own beliefs about whether taxes on the rich should be either higher or lower. Back in 1938, Henry Simons of the University of Chicago wrote a book called Personal Income Taxation, where he commented: "The case for drastic progression in taxation must be rested on the case against inequality -- on the ethical or aesthetic judgement that the prevailing distribution of wealth and income reveals a degree (and/or kind) of inequality which is distinctly evil or unlovely."

I don't expect to persuade people about the extent to which they find inequalities of income to be "evil or unlovely." But at least it would be useful if everyone was arguing from the same fact base. I'll focus my comments mostly on describing the situation of the top 1%, and let readers consider the rest of the data on their own.

For starters, here's  a table showing average tax rates for different kinds of federal taxes, across income levels.  Thus, the second column shows that the top 1% paid on average 21% of their income in federal income taxes. Conversely, the lowest quintile and the second quintile had negative income tax rates: that is, after taking into account refundable tax credits, their after-tax income was higher than their before-tax income. The top 1% paid 2.5% of income in social insurance taxes, a much lower rate, because Social Security taxes are only collected up to a certain income limit, which was $106,800 in 2009. The CBO estimates what income groups actually end up paying corporate taxes, and since those with high incomes own more stock, they pay a higher share of corporate taxes. The top 1% has income that is 5.2% lower because of corporate taxes. Federal excise taxes on gasoline, cigarettes, and alcohol weigh more heavily on those with lower income levels, and the top 1% pays 0.2% of its income in such taxes, compared with 1.5% for the lowest quintile.

Finally, here's a graph showing how the average federal tax rate has changed over time for those at different places  in the income distribution. Again, it's worth noting that those with higher income levels do, on average, pay more than those with lower income levels. The top 1% saw the share of income that they pay in federal taxes fall sharply in the early 1980s, at the time when the Reagan tax cuts reduced top marginal tax rates. After taxes on this group were raised under the first couple of years of the Clinton administration and the stock market was taking off, their average rates increased again in the mid-1990s. After the Bush tax cuts in the early 2000s, average tax rates fell for all groups. In 2009, with large numbers of unemployed not earning income, the average tax rate for the lowest quintile dropped off dramatically. 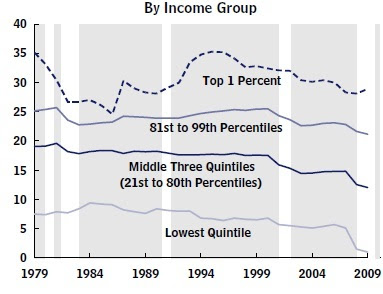