Cost of Living Adjustments for Retirees

But making a promise about future payments is, ultimately, all about what you are able and willing to pay when the bills come due. In an otherwise completely forgettable song about 20 years ago, a group called Stetsasonic sang: "[J]ust like my mother used to say in the past/ Don't let your mouth write a check that your ass can't cash." A lot of state and local pension funds let their mouths write checks that they are no longer willing to cash. At some point, Social Security may make a similar decision. 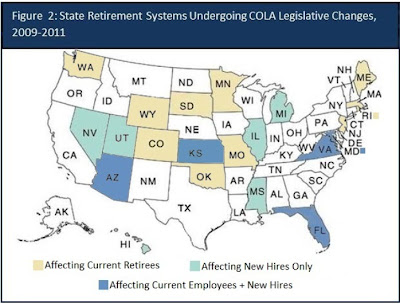 Here are some examples of how the COLA adjustments are happening: A number of states have COLAs that are not linked to inflation, but instead are just an automatic percentage amount each year. Some states (Colorado, Hawaii) have reduced the promised annual percentage increase.  Other states have gone further and sought to eliminate any automatic COLA increases at all, while of course still leaving open the possibility that legislatures could increase pensions on an ad hoc basis in the future (Kansas, Washington, and Florida). Still other states have set up rules that the full COLA, or any COLA, would only be paid if the pension fund achieves either a certain annual return (Massachusetts) or achieves a certain level of funding (Minnesota, New Jersey, Oklahoma). Still other states have set a cap on either how much income the COLA will apply to (Maine) or a cap on how much the COLA can increase salary over the lifetime of a retiree (Nevada, Missouri). A number of states have tried several of these ideas.

How likely are we to see similar changes as a way of addressing the problem of Social Security?
The Social Security actuaries estimate that if the COLA for Social Security was adjusted to be the rate of inflation minus 1 percentage point each year--instead of the full rate of inflation--that change alone would solve nearly three-quarters of the projected gap over the next 75 years between expected revenues and promised benefits.

I don't expect that politicians will do anything that transparent to Social Security. But as part of a package of changes to assure that Social Security is funded in a way that it can cover its promises over the next 75 years, I wouldn't be at all surprised to see less-transparent changes in benefit formulas that have the effect of reducing COLA adjustments.

As I noted at the start, there is a fairness argument that adjusting COLAs is unfair. But what is also unfair is for past legislatures and for Congress to set up pension and retirement programs, make promises about benefit and then fail to finance those programs sufficiently, and hand off the whole mess to future taxpayers and future retirees. The real blame in the pension and Social Security messes shouldn't go to those who are trying to address the problem, but to those who created it.