Who is Holding the Large-Denomination Bills?

Most currency in major economies around the world is held in the form of large-denomination bills that ordinary people rarely use--or even see. Kenneth Rogoff documents the pattern as part of his short essay, "Costs and benefits to phasing out paper currency," presented at a conference at the National Bureau of Economic Research in April 2014.

I think I've held a $100 bill in my hand perhaps once in the last decade (and my memory is that the bill belonged to someone else). But the U.S. has $924.7 billion worth of $100 bills in circulation, which represent by value about 77% of all U.S. currency in circulation. In round numbers, say that the U.S. population is 300 million. That works out to roughly 3100 $100 bills, on average, for every man, woman, and child in the United States. Here's the table: 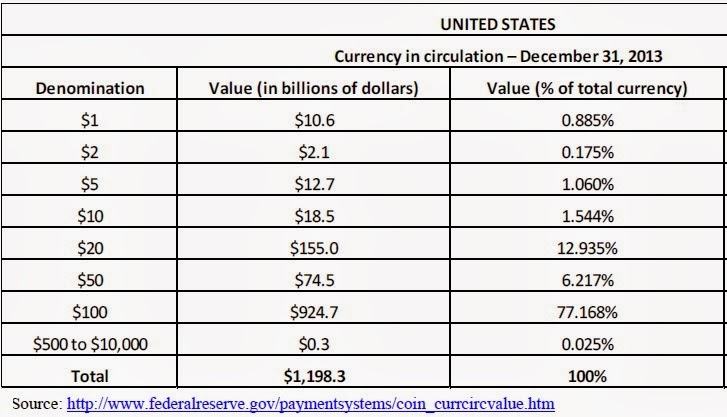 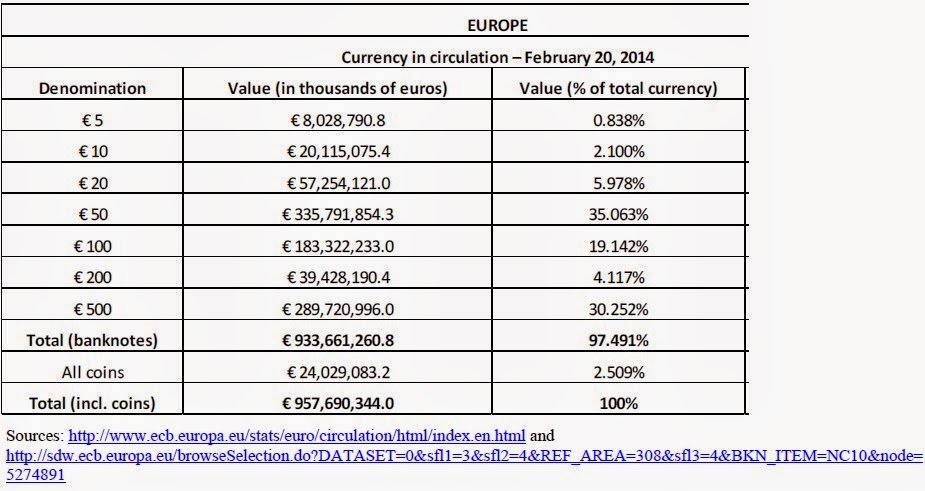 One possible explanation for this phenomenon is that lots of currency is being held outside the borders of the United States and Europe. Given the large size of the bills, it probably isn't being used for ordinary transactions: most people wouldn't hand a $100-bill to a cab driver in Jakarta. But it could be used for holding wealth in a liquid but safe form in countries where other ways of holding wealth might seem risky. However, compared to the U.S. dollar and the euro, the widespread belief is that the Japanese yen is used much less widely outside of its home country. Even so, a hugely disproportionate share of Japan's currency in circulation is in large-denomination bills. A full 87% of the Japanese currency in circulation by value is in the form of 10,000-yen notes (roughly comparable in value to a $100 bill)

Rogoff points out that same pattern even arises in Hong Kong, as well. A Hong Kong dollar is worth about 13 cents U.S. More than half of all Hong Kong dollars in circulation by value are $1,000 bills.

It's easy enough to hypothesize explanations as to why so many large-denomination bills are in circulation, but the truth is that we don't really know the answer. It probably has something to do with the extent of tax evasion or illegal transactions, or a need for secrecy, or a a fear of other wealth being expropriated.  Adding up the value of the large-denomination bills in the U.S., Europe, and Japan, the total is in the neighborhood of $3 trillion. I find it hard to avoid the conclusion that there are some extraordinarily large stashes of cash, in the form of large bills, scattered around the world. I find it hard to imagine how this currency will ever be reintegrated into the banking system--there's just so much of it. This would seem to be a fertile field to plow for some Hollywood movie-maker looking for a real-world hook for a movie with underworld connections, a daring heist, lots of pictures of enormous amounts of cash, chase scenes, multiple double-crosses and triple-crosses, and a "what do you do it now that you have now?" ending.