Computer Use and Learning: Some Discomfiting International Experience

Greater use computers to support K-12 education sometimes sometimes touted as the magic talisman that will improve quality and control costs. But the OECD provides some discomfiting evidence for such optimism in its recent report: Students, Computers, and Learning: Making the Connection. From the Foreword:


This report provides a first-of-its-kind internationally comparative analysis of the digital skills that students have acquired, and of the learning environments designed to develop these skills. This analysis shows that the reality in our schools lags considerably behind the promise of technology. In 2012, 96% of 15-year-old students in OECD countries reported that they have a computer at home, but only 72% reported that they use a desktop, laptop, or tablet computer at school, and in some countries fewer than one in two students reported doing so. And even where computers are used in the classroom, their impact on student performance is mixed at best. Students who use computers moderately in school tend to have somewhat better learning outcomes than students who use computers comparatively rarely. But students who use computers very frequently in school do a lot worse in most learning outcomes, even after accounting for social background and student demographics.

Here are a couple of sample results from the OECD report. The horizontal index is a measure of the use of information and communications technology in school. The vertical axis is a measure of scores on reading or math tests. The curve that is shown has been adjusted for the socioeconomic status of students. For reading, the result seems to be that some intermediate level of computer use beats too much or too little. For math, the use of computers doesn't seem to have much benefit at all. 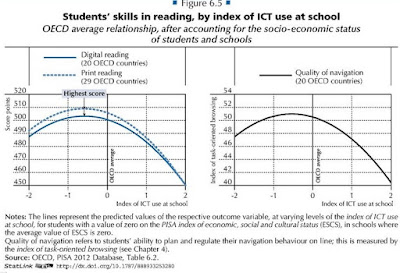 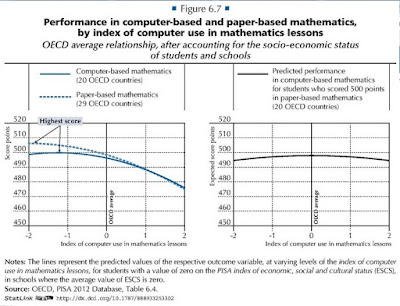 The OECD report makes the point in several places that results like these don't prove that computerized instruction can't work, nor that it isn't working well in some places. The report emphasizes that if computerized instruction actually leads to more time spent on studying, or more efficient use of time spent on studying, it would then have potential to increase learning. But at least for now, looking over the broad spectrum of OECD countries, it seems fair to say that there are places where the use of computer in schools should be higher, and places where it should be lower--and we haven't yet developed best practices for how computerized instruction can work best.

For a previous post with evidence for being skeptical about whether computers at home help learning, see this post from March 29, 2013, with evidence from an experiment done in five school districts in California.
Posted by Timothy Taylor at 7:00 AM