The canonical source for data on flows of foreign direct investment are the reports from the United Nations Conference on Trade and Development, more commonly known as UNCTAD. It's World Investment Report 2015 provides a discussion of trends up through last year.


FDI refers to an investment made to acquire lasting interest in enterprises operating outside of the economy of the investor. Further, in cases of FDI, the investor´s purpose is to gain an effective voice in the management of the enterprise. ... Some degree of equity ownership is almost always considered to be associated with an effective voice in the management of an enterprise; the BPM5 [Balance of Payments Manual: Fifth Edition] suggests a threshold of 10 per cent of equity ownership to qualify an investor as a foreign direct investor.

Thus, FDI matters not just because of the financial size of the flows, but also because it often involves a transfers of managerial or technological expertise, or a commercial buying-or-selling connection. FDI can often be part of global value chain connections across the world economy. 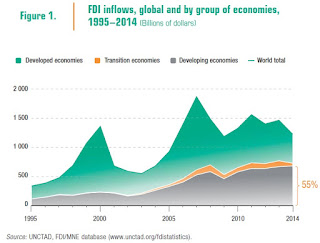 What are the economies receiving the lion's share of these FDI inflows? For those who think of China's economy as largely closed to outside investment, it's interesting that China and Hong Kong are at the top for size of FDI inflows in 2014. The US, the UK, and Canada also rank highly, in part because of how these economies often see FDI investments back and forth among their borders. 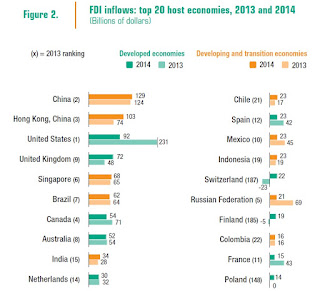 What about outflows of FDI? Here, the story is that the share of FDI outflows from developing economies has been rising, both as an overall amount and as a proportion of the total, and now constitutes about one-third of all FDI outflows. 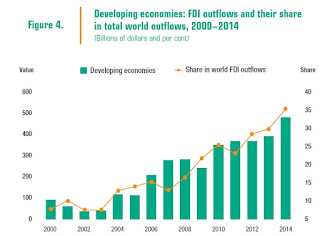 What countries mainly account for FDI outflows? It's perhaps no surprise to see the US, China, and Hong Kong near the top of the list. However, developed economies like Japan, Germany, Canada, and France play a substantial role in outflows of FDI, too. 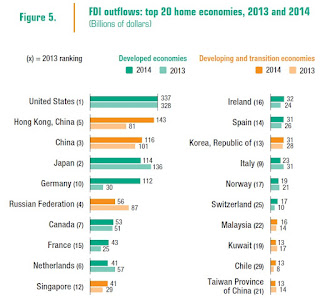