Most people in high-income countries are insulated from the actual cost of health care services. When health care is provided by or billed to the government, knowledge and perception about the full cost of that care becomes muffled. In the United States, reports the Kaiser Foundation, "Employer-sponsored insurance covers over half of the non-elderly population, 147 million people in total." Again, when an employer is paying most of the cost of health insurance, knowledge and perception about the full cost become a matter of whether you read articles full of statistics on health care spending, not personal experience. Of course, there are good health and safety reasons why one might prefer that patients and health care providers not be thinking at every moment about how to pinch pennies and cut costs. But for society as a whole, the costs of health care don't vanish just because most patients and health care providers would prefer not to talk about them--or even to know very much about them.

The Kaiser Foundation along with the Health Research & Educational do an annual annual survey of private and nonfederal public employers with three or more workers, and the results of the "2015 Employer Health Benefits Survey" are available here. In what follows, I'll quote mainly from the "Summary of Findings."

Here's how the average employer-sponsored health insurance premium has risen during from 2005 to 2015. The Patient Protection and Affordable Care Act was signed into law by President Obama in March 2010, in the middle of this time period. 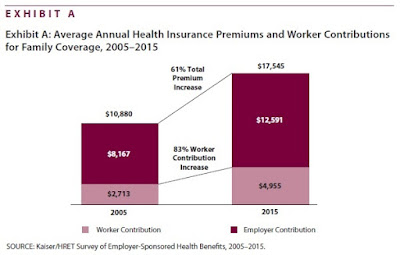 The average annual deductible is similar to last year ($1,217), but has increased from $917 in 2010. ... Looking at the increase in deductible amounts over time does not capture the full impact for workers because the share of covered workers in plans with a general annual deductible also has increased significantly, from 55% in 2006 to 70% in 2010 to 81% in 2015. If we look at the change in deductible amounts for all covered workers (assigning a zero value to workers in plans with no deductible), we can look at the impact of both trends together. Using this approach, the average deductible for all covered workers in 2015 is $1,077, up 67% from $646 in 2010 and 255% from $303 in 2006. A large majority of workers also have to pay a portion of the cost of physician office visits. Almost 68% of covered workers pay a copayment (a fixed dollar amount) for office visits with a primary care or specialist physician, in addition to any general annual deductible their plan may have. Smaller shares of workers pay coinsurance (a percentage of the covered amount) for primary care office visits (23%) or specialty care visits (24%). For in-network office visits, covered workers with a copayment pay an average of $24 for primary care and $37 for specialty care. For covered workers with coinsurance, the average coinsurance for office visits is 18% for primary and
19% for specialty care. While the survey collects information only on in-network cost sharing, it is generally understood that out-of-network cost sharing is higher.

Here's a figure showing the rise over time in share of employer-provided health insurance plans with a substantial deductible. 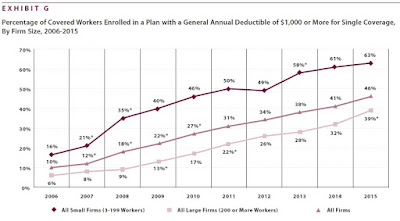 Of course, the figures given here are national averages, and in a big country, there will be variation around these average. Those who want details on details by large and small firms, type of health care provider (preferred provider organizations, HMOs, high-deductible plans, and others), geography, and other factors can consult the report. That said, here are two of my own takeaway points.

1) For a lot of middle-income workers, the cost of employer-paid health insurance at more than $17,000 per year for family coverage is a big part of your overall compensation--much larger than many people realize. It's also not something that employers do out of the goodness of their hearts. Employers look at what overall compensation they are willing to pay, and when more of it comes in the form of health insurance premiums, less is available for take-home pay.

2) The rise in direct employee contributions to their own health care costs--contributing to the insurance premium, along with deductible and coinsurance--is enormously annoying to me as a patient and a father. On the other side, the economist in me recognizes that cost-sharing plays a useful function, and there is a strong body of evidence showing that when patients face a modest degree of cost-sharing, they use substantially fewer health care services and their health status doesn't seem to be any worse. But at some point--and maybe some people are already reaching that point--high deductibles and copayments could potentially lead people to postpone needed care.

As I've pointed out on this blog in the past, the prevalence of employer-provided health insurance in the US economy is an historical accident, dating back to a time in World War II when wage and price controls were in effect--but employers were allowed to offer a raise by providing health insurance coverage to employees. The amount that employers spend on health insurance for employees is not counted as income to the employees, and the US government estimates that excluding this form of compensation from the income tax costs the government more than $200 billion per year. Moreover, the percentage of firms providing employer-provided health insurance--especially among mid-sized and small firms--seems to be declining slowly over time. 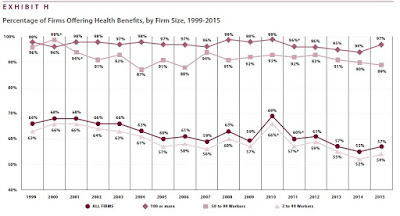 But almost all large employers do provide health insurance benefits,and seem likely to do so into the future. A fair understanding of the US health insurance market and health care policy needs to face up to the social costs and tradeoffs, and not just the benefits, of employer-provided insurance.