Cap and Trade: Lessons of Experience

A key question for a number of policy-makers, especially those contemplating the current negotiations in Paris about climate change issues, is whether a cap-and-trade approach might be a useful tool for reducing national emissions of carbon and other greenhouse gases in a cost-effective way. For example President Xi Jinping announced a couple of months ago that China will launch a national CO2 cap-and-trade system covering key industries in 2017. In the United States the American Clean Energy and Security Act of 2009 (more commonly known as the Waxman-Markey bill) was a cap-and-trade approach to reducing US carbon emissions. The bill passed the House, but was never brought up for discussion or a vote in the Senate.

For the uninitiated, a cap-and-trade approach to reducing pollution sets a total amount of pollution that can be emitted, and then divides up that quota among existing emitters of that pollution. The kicker is that a companies can trade--that is, buy and sell--portions of their pollution quota. As a result, every company that is emitting pollution has an incentive to seek out ways of emitting less for each unit of production, because it can then either expand production, or sell the extra pollution quota to a different firm that wants to expand production.

The potential advantage of this approach is that instead of requiring every pollution emitter to follow the same rule, those emitters who can reduce pollution most cheaply will have an incentive to do so. Moreover, the pollution quotas can also be gradually phased down over time, so that a permit which allows its holder to emit, say, one unit of pollution in a given year will only allow it to emit 95% of that amount in the next year, and lower amounts into the future. This challenge is that this approach to pollution reduction may sound unwieldy or unworkable.

Pragmatists who want to know when cap-and-trade has worked better or worse might begin with the essay by  Richard Schmalensee and Robert N. Stavins, "Lessons Learned from Three Decades of Experience with Cap-and-Trade," which is available as a November 2015 discussion paper from Resources for the Future (DP 15-51), and will appear in a future issue of the Review of Environmental Economics and Policy.  Schmalensee and Stavins offer an overview, with references to the underlying research, of real-world cap-and-trade programs addressing air pollution issues. I'll append their summary table of the seven main programs they discuss at the end of this post, although it may be a little hard to read in the blog format. But one takeaway is that the successes of cap-and-trade approaches to this point have involved lead, sulfur dioxide, and nitrogen oxides--but not the carbon emissions associated with an elevated risk of climate change.

Here's are three well-researched success stories of a cap-and-trade approach in non-carbon contexts:

1) Back in the 1970s, there was a decision to reduce lead emissions from gasoline by 90%. This was done with a cap-and-trade program between gasoline refineries that involving pollution permits for lead that were shrinking in size. The flexibility from using cap-and-trade meant that the desired reduction in lead emissions was achieved at 20% lower cost than in an inflexible "command-and-control" program that would have just ordered each individual refinery to reduce emissions.  The program then ended in 1987.

2) In the 1990s, there was a decision to reduce sulfur dioxide emissions from fossil-fuel electrical generating plants. This was done with a cap-and-trade program. As they report: "SO2 emissions from
electric power plants decreased 36 percent between 1990 and 2004, even though electricity generation from coal-fired power plants increased 25 percent over the same period." It's hard to estimate the cost savings in an exact way, because you have to do an estimate of what would have happened with a different set of regulations, but the range of estimates suggests that the pollution reduction happened with costs at least 15% lower, and maybe a lot more than 15% lower.

3) Emissions of nitrogen oxides are linked to ground-level ozone, otherwise known as smog. Starting in 1999, eleven northeastern states and the District of Columbia set up a regional cap-and-trade system to reduce nitrogen oxide emissions from about  1,000 electric generating and industrial units. Overall emissions fell by almost three-quarters, and one study found that the cost of the reduction was 40-47% lower with a cap-and-trade approach than it would have been with a less flexible set of regulations.

These examples offer what Schmalensee and Stavins at one point call "proof of concept," which in this case means that cap-and-trade can be a useful tool for cost-effective pollution reduction. However, the empirical evidence on whether it is a useful approach for reducing carbon emissions is not yet clear. Here are three examples of unclear or incomplete results.

1) For example, nine northeastern U.S. states have joined Regional Greenhouse Gas Initiative (RGGI), which seeks to reduce carbon dioxide emissions from power plants. But the "cap" in this particular cap-and-trade approach was set at a level which didn't take into account how the Great Recession would reduce demand for electricity, or how the availability of lower-cost natural gas would reduce carbon emissions. As a result, actual emissions have been below the level set by the cap with no need for trading at all.

2) California passed a bill in 2006 to reduce the state's greenhouse gas emissions using a cap-and-trade approach. However, the implementation of the law started in 2013, applying only to the electrical power and manufacturing sector, and only expanded to cover fuel in 2015. There isn't yet any evidence on its effects over time.

3) The world's biggest carbon trading system is the Emission Trading System in the European Union. It was adopted in 2003, and started operating in 2005. As Schmalensee and Stavins report, "the EU ETS covers about half of EU CO2 emissions in 31 countries. The 11,500 regulated emitters include electricity generators and large industrial sources. ... The program does not cover most sources in the transportation, commercial, or residential sectors ..." However, the price for emitting carbon in this system has been very low: indeed, it collapsed all the way to a price of zero in 2007, and in recent years has been in the range of €5 to €10, which isn't enough to drive the necessary reductions in carbon emissions. There are a lot of issues here in the design of the program, but basically, if you give out lots of permits for emitting carbon, and also have lots of ways of meeting the rules for emissions reductions (like letting carbon emitters pay for reducing carbon somewhere else in the world, rather than actually cutting their own emissions), then the system may not function well.

The design of a cap-and-trade system clearly matters a lot, as does the type of environmental problem is it addressing, along with the economic and political context in which it is operating. Schmalensee and Stavins offer a useful overview of these very specific issues. My own sense is that when it comes to carbon emissions, these practical details make it hard to write legislation: indeed, the Waxman-Markey bill back in 2009 had eventually bloated to 1,200 pages of tall weeds in which the special interests could lurk.  Those who would prefer to think about a carbon tax as a way of reducing carbon emissions, rather than a cap-and-trade approach, might be interested in this post on "Carbon Tax: Practicalities of Cutting a Deal" (August 18, 2015).

Those who are interested in this subject might also want to check out the Winter 2013 symposium in the Journal of Economic Perspectives about "Trading Pollution Allowances." The four papers in that symposium were:
Finally, here's the Schmalensee-Stavins summary table of the seven cap-and-trade programs in the recent discussion paper: 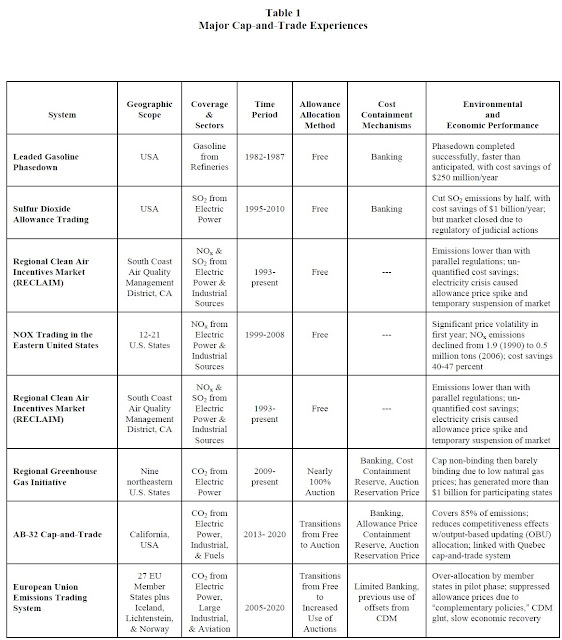