Back in 1981, actuarial projections foretold that Social Security could go broke as early as August 1983. A bipartisan commission, led by Alan Greenspan, was appointed by President Reagan and Congressional leaders to offer recommendations. Under political pressure from all sides, the commission process eventually produced a set of proposals to raise the Social Security payroll tax, phase in a later retirement age, and make some technical changes to benefit formulas that had the effect of trimming the future growth of benefits. These changes allowed the Social Security trust fund to start building up, with the idea that when the the baby boom generation started to hit retirement age around 2010,  there would be enough funding on hand. But it was apparent even back in the later part of the 1980s that while the Greenspan commission agreement had bought a half-century or so of solvency for the system, Social Security might well need revisiting in the second or third decade of the 21st century.

Well, the retirement of the baby boomers is underway and the time for that next round of Social Security changes is arriving. The Congressional Budget Office has a useful report out Social Security Policy Options, 2015 (December 15, 2015), which lists the menu of options. As I read the report, which is so similar to other reports of its kind that I've been seeing for the last 15 years or more, I find myself thinking that there should be a political opportunity here. In the run-up to the 2016 elections, what party or politician is willing to look at the menu of options, pick a few of them, and then claim credit for taking the lead on fixing Social Security.

A few points about the diagram are worth noticing.

First, from 1985 up into the 2000s, the revenues going into the Social Security system exceeded the outlays. This was one legacy of the Greenspan commission reforms--that is, building up a larger trust fund.

Second, you can see outlays start rising sharply around 2010. Part of this change was workers in their 60s who were bushwhacked by the Great Recession and ended up going on Social Security sooner than they had planned. But you can also see that the rise in benefits payed (as a share of GDP) rises up to about 2035, when the retirement of the boomer generation will have run its course.

Third, notice that the system is now paying out more in benefits each year than it is collecting in taxes. It can do this because of the trust fund that was accumulated earlier.

Fourth, the trust fund runs out of money around 2034, which is why the the solid line in the figure drops down at that point, showing that if the system then relies on the taxes it is taking in, benefits will have to be substantially lower than currently promised.

Fifth, the gap between benefits and receipts doesn't change much after about 2035. This tells you that the Social Security problem is essentially a one-time problem, occurring as a result of the retirement of the boomer generation. If we can enact a series of reforms that moves up the receipts line and moves down the benefits line, then after about 2035 the system can be fairly stable for decades into the future.

So what does the menu of options look like? The CBO report lists 36 options, but many of them would have only a relatively small effect in addressing the overall problem. Here's a table that you may need to enlarge to read, but here's the gist of it. The lines on the right-hand side show what portion of the shortfall in Social Security over the next 75 years would be addressed by a given proposal. 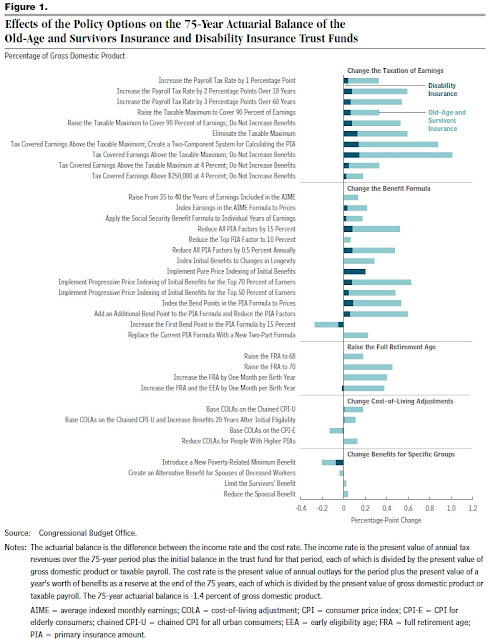 The key point is that there are lots of proposals that would address major chunks of the the problem.

For example, on the tax side one might choose to phase in an increase of two percentage points in the payroll tax over the next decade, or to raise the amount of income covered by the payroll tax over the next 10 years up to about $320,000. Either step, assuming no corresponding change in benefits ,would solve about 40% of the long-run financing gap for Social Security.

Keep phasing in a later age of full retirement. For example, if full retirement age is gradually raised by by two months per birth year, it would eventually reach age 70 for workers who were born in 1978--and who are turning 70 in 2048. This step would solve about 30% of the long-run financing gap for Social Security.

Then tweak the benefits formula in a few ways. Given longer life expectancies and work histories, it makes sense to base the Social Security benefits formula on your top 40 years of earnings, rather than on the top 35 years. You could also use "progressive price indexing," where those receiving lower levels of benefits would see the same increases as in current law, but those receiving higher benefits would see a slightly slower increases over time.

Some combination of tweaks like this would raise enough money so that Social Security could both address its long-term financial troubles and even have something left over to raise the benefits of some of the poorest people receiving Social Security and keep them above the poverty line.

In short, fixing Social Security isn't rocket science. If you don't like my suggestions, pick your own from the lists above. But no party or politician seems willing even to talk in these terms. The political problem with seems to be that neither party is content with just fixing Social Security as it stands.

A lot of Republicans would like to see part of all of Social Security converted to a system of private retirement accounts. A lot of Democrats prefer a set of changes that would increase Social Security taxes on those with higher income levels and use the funding to pay the existing promised benefits--perhaps with some extra payments to those with the lowest income. Because this approach puts all the costs on those with higher incomes, but doesn't raise the benefits those people would receive, it would shift Social Security away from being a (mostly) contributory retirement system with a modest degree of redistribution to a system with a much heavier degree of redistribution. In short, both sides are taking turns either ignoring the issue or else pushing for their preferred changes at the expense of just fixing what's broke.

The Greenspan commission reforms back in the early 1980s only got traction when the system was scheduled to go broke in two years. Maybe our fractured political system is incapable of addressing this issue until the trust fund has less than two years to run. But I do wonder if there wouldn't be a political advantage to some party or politician from saying: "Here's a common-sense approach to fixing Social Security. Sure, it doesn't make all the changes I'd prefer to see, but it will work, and it will bring at least another half-century or more of solvency."