Since the end of the Great Recession, the US (and the world) economy have been waiting for a bounceback of economic growth. About two years ago, Larry Summers resuscitated a theory put forward by Alvin Hansen in the 1930s that the economy might instead be entering a period of "secular stagnation."

The topic has come up a number of times on this blog: for example, in "Secular Stagnation: Back to Alvin Hansen" (December 12, 2013) I refer to a talk that Summers gave in November 2013 on this subject and discuss the origins of the term back in Hansen's 1937 talk; "Sluggish US Investment" (June 27, 2014) has a discussion of one of Summers's early talks on the subject; the "Secular Stagnation Controversy" (August 29, 2014) offers discussion of an e-book with 13 short essays taking various views; and in "Keynes, Secular Stagnation, and Investment Shortfalls" (June 10, 2015) I look at the arguments that Keynes put forward on this subject in the early 1940s. Now, Summers has updated and sharpened his views in "Low Real Rates, Secular Stagnation,and the Future of Stabilization Policy," a talk given on November 20, 2015, at the annual conference of the Central Bank of Chile.  Here are some main themes:

Mainstream estimates of the potential output of the economy--that is, how big the economy woudl be with full employment of labor and capital resources--is diminishing. Here's a figure showing estimates over a series of years of how potential US GDP would rise, from the Congressional Budget Office. 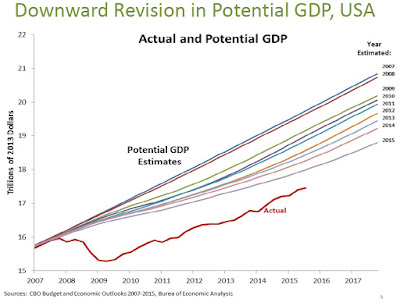 Summers puts the patterns together in this way:


"I would suggest that these events are closely related. I would suggest that what has gone on, certainly in recent years, and for quite a long time, is that there have been a variety of structural changes in the economies of the industrial world that lead to an increasing propensity to save, a decreasing propensity to invest, and, as a consequence, lower equilibrium real rates; as a consequence, less aggregate demand and disappointing growth performance; and, as a consequence, less upward inflationary pressure. While I do not believe that precise sources have been well worked out or are easily identified, I believe that one possibility is the trends we have observed over last 20 years will continue."

Here is his list of possible reasons for this confluence of factors, which are discussed in more detail in the talk. 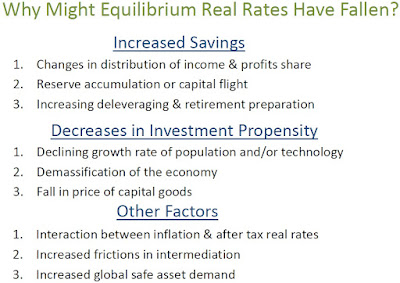 Summers has no straightforward policy answer to offer here. He notes using monetary policy to stimulate the world economy may prove difficult, given that the interest rates used for monetary policy are already at near-zero levels. He suggests considering more aggressive use of fiscal policy and debt financing--in some ways, as a method of counterbalancing excessive global saving--but there are obvious issues with a policy of large and sustained deficits over time.

In the past, I have called this the problem of "snowbank macroeconomics:" just as a driver of a car stuck in a snowbank can press the gas pedal as hard as they want and not make much progress, it seems to me that we are in a situation where monetary and fiscal stimulus that has been extremely high by historical standards since about 2008 has had a much smaller effect on output and inflation than would have been expected before the Great Recession. I've come to believe that in a financial crisis and its slow-growth aftermath, the basic tools of monetary and fiscal policy face real limits on what they can accomplish. Thus, I'd argue that the growth-based agenda should focus on a different list of issues:  expanding education and training; expanding research and development spending; tax and regulatory reform; expanding international trade; and investments in energy and infrastructure.

Note added on 12/30: Paul Krugman was "quite unhappy" with this concluding paragraph, and took issue at his blog. My response to Krugman is here.
Posted by Timothy Taylor at 8:00 AM