Homelessness in America: A Slow Decline

Each year the US Department of Housing and Urban Development conducts a "point-in-time" survey in which it seeks to count the number of homeless on one night in January. Because the point-in-time survey is conducted with the same methods each year, it offers a way of looking at trends in homelessness over time. The 2015 Annual Homeless Assessment Report (AHAR) to Congress was published in November 2015. Here's the overall pattern: 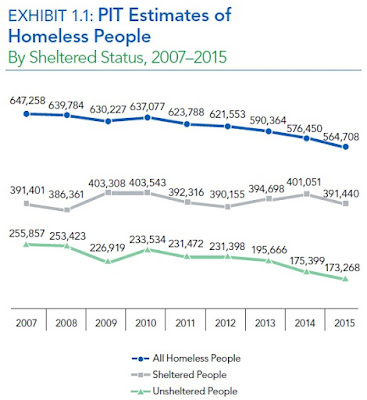 Of course, even as the survey of course answers some questions, it raises others. For example, this measure is based on a single night, and so understates the number of people who find themselves homeless at some point during the year. Another part of the survey does seek to measure "chronic" homelessness, which is defined as someone with a disability who has been homeless for at least a year, or who has had at least four spells of homelessness in the last three years. Roughly one-sixth of the homeless counted in this survey are chronically homeless. Another issue is that the number of homeless people in shelters has remained much the same over the last decade. Thus, the decline in the number of homeless is due to a fall in the unsheltered homeless (for example, those who were spending that night in January under bridges, in cars, or in abandoned buildings). One suspects that, even with the best effort in the world, the estimated number of homeless in shelters is more accurate than the estimated number of unsheltered homeless.

The HUD report offer a lot of breakdowns of the homeless by state, metro area, individual or family status, and so on. My eye always jumps to the estimates that 22.6% of the homeless are under the age of 18, and another 9.4% are ages 18-24.

The National Alliance to End Homelessness also does an annual report, and The State of Homlessness in America in 2015 offers some context for the basic numbers in the HUD survey (much of it based on the HUD data), and some overview of  policy efforts. The Bush administraion had a "housing first" policy that focused on getting the homeless into housing first, and then seeking to address their addiction or health problems, and was widely credited with some success. The Obama administration announced its "Opening Doors" policy to end homelessness in 2010. I am admittedly more prone than most, and perhaps more prone than fair, to make judgements about energy and effort based on whether reports are being filed. But with that caveat duly noted, it's troubling to me that the US Interagency Council on Homelessness last completed an annual report back in 2013.

To get a concrete sense of one evolution in homelessness policy, consider this figure from the National Alliance to End Homelessness, which shows the inventory of housing for homelessness programs. Notice that the biggest rise in in the category of "permanent supportive housing." Conversely, the biggest fall is in "transitional housing," although this is slightly offset by the recently added category of "rapid re-housing." The underlying theme here is to recognize that there is a need for emergency and transitional housing, but to put more emphasis on moving people into a permanent housing arrangement. For example, one current policy goal is to use the expansion of permanent housing to end "chronic" homelessness by 2017. 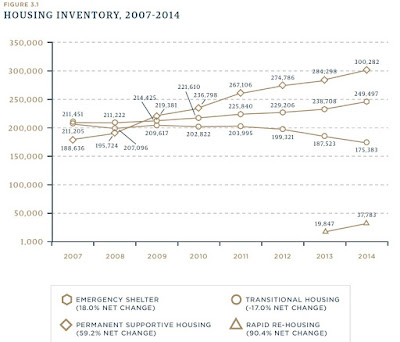 The gradual decline in homelessness is to me a bit of unexpected good news. If you had asked me for a prediction of how homelessness would change during the Great Recession and its aftermath, with high rates of long-run unemployment and turmoil in many housing markets, I would have predicted a rising level.
Posted by Timothy Taylor at 12:30 PM