Fed Interest Rate Increases: Not When, But How

It has seemed likely for about a year now that the Federal Reserve would raise interest rates in the later part of 2015. After all, back in December 2012 the Fed announced that "this exceptionally low range for the federal funds rate will be appropriate at least as long as the unemployment rate remains above 6½ percent." But when the unemployment rate fell below that level in in April 2014, the Fed kept putting out complex and ambiguous statements, but wasn't yet ready to move. Now the unemployment rate has dropped to 5.0%, according to the statistics released in November, and a rise in interest rates seems likely soon, whether it happens at the next meeting of the Fed Open Market Committee on December 15-16, or early in 2016.

For example, Alan Blinder, the eminent Princeton professor of economics who was also a member of the Federal Reserve Board of Governors from 1994 to 1996, recently put it this way in the Wall Street Journal:


"In all likelihood, the FOMC [Federal Open Market Committee] is heading for an eventual federal-funds rate near 3.5%. The key word is “eventual.” The Fed is in no hurry and will probably take three years or so. If so, the tightening pace would be roughly 100 basis points a year, which is less than half the average of the previous three tightening cycles (2004-06, 1994-95 and 1988-89). While the Fed hasn’t addressed this point, it’s also a good bet that the FOMC will not lock itself in to a fixed pace, as it did in 2004-06, when it raised the federal-funds rate 25 basis points at an amazing 17 meetings in a row. One hundred basis points a year translates to 25 basis points at every second meeting, on average. But the Fed won’t be that regular."


My focus here is not on when or how much the Fed will raise interest rates, but on the mechanics of how the policy will be carried out. The standard way of raising interest rates before 2007 was, as every intro textbook explains, "open market operations." However, the Fed's quantitative easing policies have made open market operations obsolete, at least for the foreseeable future.  Jane E. Ihrig, Ellen E. Meade, and Gretchen C. Weinbach explain why, and what will take its place, in "Monetary Policy 101: What’s the Fed’s Preferred Post-Crisis Approach to Raising Interest Rates?", published in the Fall 2015 issue of the Journal of Economic Perspectives. (Full disclosure: I've been Managing Editor of JEP since the first issue in 1987.)

For a longer discussion of the old-style approach to monetary policy through open market operations, you can check the Ihrig, Meade, and Weinbach  article, or an intro textbook, or the explanation at the Federal Reserve website. But in a nutshell,  the standard quick-and-dirty intro econ way of explaining the federal funds market n the old days before the Great Recession was that it involved very short-term loans, often literally overnight, from one bank to another. The Federal Reserve required that banks hold reserves, but those reserves paid no interest. Thus, banks would try to minimize their avoid excess reserves. But sometimes, as a result of a batch of large transactions at the end of a day, a healthy bank would find that it needed to boost its reserves a bit, and it would do so by borrowing in the federal funds market. When the Federal Reserve carried out its "open market operations"--that is, buying or selling government bonds with banks--it would aim at a certain target for the federal funds rate. For example, a higher federal funds rate would mean that banks were more concerned about needing to borrow at that rate, and so the banks would hold a larger cushion of reserves.

This basic story of how the federal funds market works no longer describes reality, for two main reasons. 1) As a result of "quantitative easing," which involved the Federal Reserve buying assets from financial institutions including Treasury debt and mortgage-backed securities, US banks are holding literally trillions of dollars in "excess reserves" above any beyond what is legally required. In August 2007, banks had about $14 billion in reserves at the Fed; at the end of 2014, they had $2.6 trillion in reserves at the Fed. 2) In the past, the Fed paid no interest on reserves. Now it does. So banks have no particular incentive to avoid holding reserves as they did before.


Because banks are no longer worried about having enough reserves at the Fed (they already have lots of excess reserves and they are being paid interest on those reserves), the fundamental nature of the federal funds interest rate market has shifted. It's no longer mostly about depository institutions lending to other depository institutions. Instead, the main lenders in the federal funds market have become certain government sponsored-enterprises that help to create mortgage-backed securities--especially the 12 Federal Home Loan Banks, but also Fannie Mae and Freddie Mac. The main borrowers in the federal funds market are not stand-alone banks, either. They are mainly bank holding companies and foreign companies. A key point here is that banks are now paid interest on their excess reserves by the Fed, but agencies like the Federal Home Loan Banks are not. Thus, as Ihrig, Meade, and Weinbach put it: "[M]ost transactions inthe federal funds market today reflect arbitrage activity between banks that earn interest on reserves and nonbanks that do not ..."

To sum up the situation here: When the Federal Reserve announces that it will raise interest rates, what it actually means in practice is that it will raise its target for the federal funds interest rate. But the market where that interest rate applies now involves relatively few actual US domestic banks. Instead, it mainly involves bank holding companies that receive interest on excess reserves at the Fed lending to Federal Home Loan Banks that don't have access to interest from the Fed. In fact, most domestic banks don't care that much about the federal funds interest rate, because they have plenty of extra reserves above the legal requirement and have little need to borrow at that rate.

So in this new situation, how will the Fed actually raise interest rates? Here's an illustrative figure from Ihrig, Meade, and Weinbach. The line between "Today" and "In the future" is the Fed decision to "lift off" and raise interest rates. Two things change. 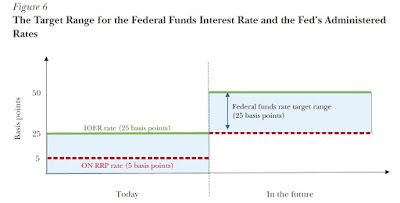 The Federal Reserve will at some point announce a higher target for the federal funds interest rate. But to accomplish that target, the primary policy tool for the Fed is going to be raising the "interest rate on excess reserves" held by banks, will will then be transmitted to the federal funds interest rate by the force of arbitrage. Ihrig, Meade, and Weinbach describe the dynamic in this way (reference to a figure omitted):

A quick-and-dirty way to think of this connection is that if the Fed is paying banks more interest on their excess reserves, banks are going to charge higher interest when lending out their money elsewhere.

The figure above also shows a rise in the ON RRP rate, which stands for "overnight reverse repurchase rate." A repurchase agreement is a form of short-term lending and borrowing. What happens is that one party sells a financial security to another party, but as part of the deal agrees to repurchase that security at a specific price in the future. The pattern of payments here is just like a loan: that is, the party selling the financial security gets cash now, and repays that cash--plus a little extra--in the future.  In an "overnight" repurchase agreement, the repurchase happens the next day. Here's a description of reverse repurchase agreements from the Federal Reserve Bank of New York, which would be conducting these operations.


A reverse repurchase agreement, also called a “reverse repo” or “RRP,” is an open market operation in which the Desk [the New York Fed trading desk] sells a security to an eligible RRP counterparty with an agreement to repurchase that same security at a specified price at a specific time in the future. The difference between the sale price and the repurchase price, together with the length of time between the sale and purchase, implies a rate of interest paid by the Federal Reserve on the cash invested by the RRP counterparty.

Thus, an overnight reverse repurchase agreement is essentially an offer by the Federal Reserve to lend funds in the short-term, through the mechanism of first selling a security and then repurchasing it. A key point here is that while only banks with reserves at the Fed get paid interest on those reserves by the Fed, a much larger group of financial institutions can participate in ON RRP arrangements with the Fed.  Ihrig, Meade, and Weinbach write:

However, the Fed is going to try to carry out this RRP lending only when strictly needed to raise interest rates, and to phase it out in between, so that the Fed doesn't become a major and permanent player in these markets.

The main concern raised by the Federal Open Market Committee in using an overnight reverse repurchase agreement facility is that a large and persistent program could permanently alter patterns of borrowing and lending in repo markets and money markets as a whole—a concern the Committee has referred to as increasing the Federal Reserve’s role or size of its “footprint” in money markets. Keep in mind that the Fed’s operations in financial markets before the crisis were generally quite small and were aimed at affecting conditions in the federal funds market, a relatively small market. A large overnight reverse repurchase agreement facility could potentially expand the Federal Reserve’s role in financial intermediation and reshape the financial industry over time in ways that are difficult to anticipate in advance. In addition, in times of stress in financial markets, demand for a safe and liquid central bank asset might increase sharply, and the Fed’s counterparties could shift cash away from financial and nonfinancial corporations in the private sector and place it at the Fed instead, potentially causing or exacerbating disruptions in the availability of funds in money markets. To mitigate these concerns, the Federal Open Market Committee plans to use its overnight reverse repurchase agreement facility only to the extent necessary to support short-term interest rates, and it will phase the facility out when it is no longer needed


How accurately will the Federal Reserve be able to control the federal funds interest rate with this combination of raising the interest rate on overnight reserves and operating an overnight reverse repurchase operation? Will there be some unexpected or unwanted side-effects? The honest answer is that we can't be sure. The Fed has been experimenting at a smaller scales and gearing up in various ways, but we won't know how it works until it starts happening over the next few years.  Blinder offers one more reason for concern in his Wall Street Journal piece:

[H]ow will financial markets react on Dec. 16? Markets seem to have built a 25-basis-point rate increase into pricing and so shouldn’t react much when it actually happens. But markets have proven themselves to be fickle and frequently surprising. Remember: Some bond traders were teenagers the last time the Fed raised rates.

For a discussion of these new issues in how monetary policy will be carried out from about year ago, as these policies were taking shape, see my post on "The Two New Tools of Monetary Policy" (November 10, 2014).