Social scientists go to sleep every night muttering "correlation is not causation." The correlation between rates of crime and rates of incarceration offers a useful example. The Council of Economic Advisers lays out many of the relevant issues in its April 2016 report, "Economic Perspectives on Incarceration and the Criminal Justice System."  The report discusses in some detail how levels of police and rates of arrest haven't changed all that much, but the likelihood of arrest leading to a conviction and the length of prison sentence given a conviction are on the rise. There's also some discussion of how the rest of a community is affected by high incarceration rates. Here, I'll focus on what the report has to say about reducing crime.

There's clearly a correlation in the US between a falling rate of crime and a rising rate of incarceration during the last few decades. Using figures from the CEA report, here are the basic patterns. 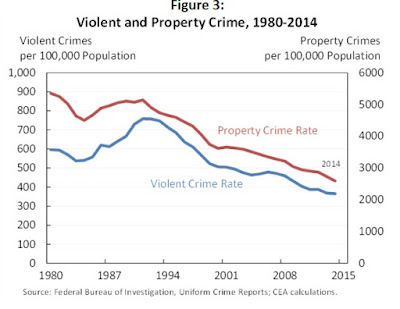 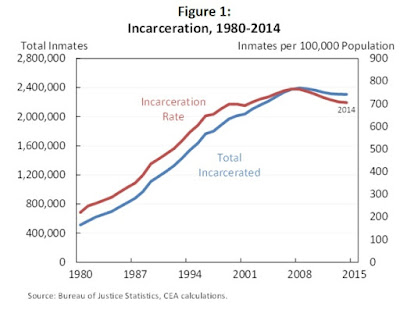 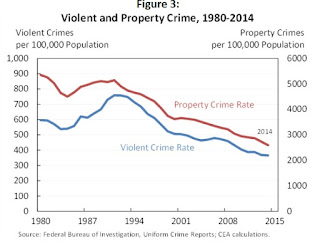 But of course, if you take any two patterns that show a long-term trend, they will be either positively or negatively correlated with each other. The question of whether one factor caused the other is more difficult to answer. As a starting point, it's easy enough to note that incarceration rates are not the only longer-term patterns that affect levels of crime. As the report notes:


Demographic changes also likely play a part; the youth proportion of the U.S. population (ages 15-30) declined by 12 percent between 1980 and 2013, reducing the general propensity for criminal behavior which is more prevalent among young people. Improvements in police tactics and technology used in policing may have also played a role. Other potential explanations include declines in alcohol consumption, decreases in “crack” cocaine use, and a reduction in exposure to lead ...

In addition, the effects of incarceration on crime are governed--like so many other things--by a law of diminishing returns. When the incarceration rate starts rising, you will be (on average) locking up more of those who committed the most severe crimes and who look the most like career criminals. As the incarceration rate gets ever-higher, you will be (on average) locking up a greater share of those who committed relatively less severe crimes and who are relatively less likely to be career criminals. The CEA report puts in this way (citations and footnotes omitted):

Economists tend to look at crime, like so many other issues, as a matter of balancing costs and benefits. For example, most jurisdictions in the US have decided that a rigid enforcement of speed limits wouldn't provide benefits that would be worth the costs to the criminal justice system. The United States may well have reached that point at which costs exceed benefits with incarceration. Here's an example from the CEA report:


"Cost-benefit analyses of incarceration weigh the direct costs of incarcerating an individual against the social value of crimes that may have been averted due to incarceration. Lofstrom and Raphael (2013) examine a 2011 policy change in California that resulted in the realignment of 27,000 State prisoners to county jails or parole. They find that realignment had no impact on violent crime, but that an additional year of incarceration is associated with a decrease of 1 to 2 property crimes, with effects strongest for motor vehicle theft. Applying estimates of the societal cost of crime, the authors calculate that while the cost of a year of incarceration is $51,889 per prisoner in California, the societal value of the corresponding reduction in motor vehicle thefts is only $11,783, yielding a loss of $40,106 per prisoner. Notably, this net loss per prisoner would be larger if the study considered the additional costs of collateral consequences, such as lost earnings or potential increases in re-offending due to incarceration. These estimates highlight the fact that there are more cost-effective ways of reducing crime than incarceration, such as investing in law enforcement, education, and policies that expand economic opportunity."

When the report refers to alternative law enforcement efforts, one approach is more police. Here's the CEA:


"In contrast to studies of incarceration and sentencing, research shows that investments in police have high returns. In a study of the impact of a mass layoff of highway troopers in Oregon, DeAngelo and Hansen (2014) found that traffic fatalities and non-fatal injuries significantly increased, due to a greater prevalence of dangerous driving and drunk driving. The estimates in this paper suggest that the state trooper salary cost required to save a life is $309,000, which is very low compared to estimates of the statistical value of life, which range from $1 million to $10 million ..." 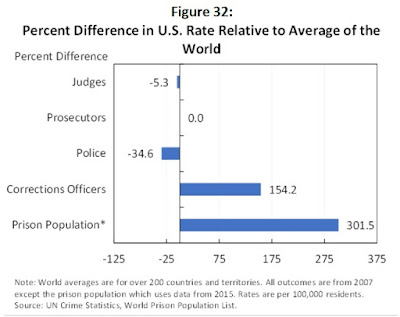 Putting these various factors together:


A final step to reduce crime is to find ways to improve high school graduation rates. The CEA report puts it this way:


"Lochner and Moretti (2004) conduct a cost-benefit analysis of the effect of increasing the high school graduation rate on crime and arrest rates. Comparing costs and benefits in 1990, they estimate that while the yearly per pupil cost of secondary school is $6,000, the societal benefit from reducing crime is $1,170-$2,100 per additional male graduate, including reductions in victim costs, property damages, and incarceration costs. When these benefits are considered alongside an $8,040 increase in annual income from a high school degree, the benefits of an additional high school graduate are tremendous ... In aggregate, the authors calculate that a 1 percent increase in the total high school graduation rate generates a $1.4 billion benefit due to reductions in crime rates."