The EU Carbon Trading Market: A Decade of Experience

It's common to hear proposals that the US should adopt a "cap-and-trade" system for reducing climate emissions. Indeed, back in 2009 the House of Representatives passed the American Clean Energy and Security Act, the so-called "Waxman-Markey" act, which would have implemented such a law, but the legislation died in the US Senate without ever being brought to a vote. In the meantime, the European Union has now had a cap-and-trade policy in place for 10 years. How well is it working?

The Winter 2016 issue of the Review of Environmental Economics and Policy has a three-paper symposium on the subject of "The EU Emissions Trading System: Research Findings and Needs."
(REEP is not freely available on-line, but many readers will have access through library subscriptions.) The three papers are:
The paper by Ellerman,  Marcantonini,  and Zaklan offers an overview of the EU carbon trading market, while the other papers drill down into more specific issues. Ellerman et al. describe the EU Emissions Trading System (ETS) in this way (footnotes and citations omitted):


The EU ETS is a classic cap-and-trade system. As of 2014, the EU ETS covered approximately 13,500 stationary installations in the electric utility andmajor industrial sectors and all domestic airline emissions in the EU’s twenty-eight member states, plus three members of the closely associated European Economic Area: Norway, Iceland, and Liechtenstein. Approximately two billion tons of carbon dioxide (CO2) and some other greenhouse gases (GHGs) are included in the system, together accounting for about 4 percent of global GHG emissions in 2014. Aside from its sheer size in terms of geographic scope, number of included sources, and value of allowances, another distinguishing feature of the EU ETS is its implementation through a multinational framework, namely the EU, rather than through the action of a single state or national government, as assumed in most theory and as has been the case for most other cap-and-trade systems.

They discuss a variety of the nuts-and-bolts details of the system. For example, should the permits to emit carbon be given to existing firms, or auctioned? Economic theory tends to favor auctioning, but the horse-trading of politics tends to favor giving the permits away, which is mainly what happened. How will the total carbon emissions over time be set? Will EU emitters be allowed to pay for steps that would reduce carbon emissions elsewhere in the world, and then use reductions to offset part of any required reduction in their own direct carbon emissions?

I won't try to describe the ins-and-outs of the EU system in this blog post. It's gone through three "phases" and a bunch of other rule changes during its single decade of existence. But two graphs give a sense of its main themes--and the difficulties in evaluating it performance. The first graph shows carbon emissions in the EU while the carbon trading system has been in effect. 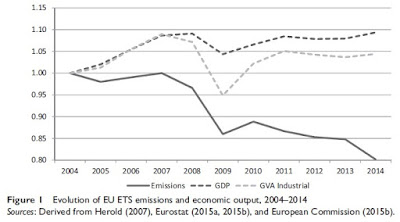 Emissions are clearly down. However, it's not easy to separate out the effects of the emissions trading system from other policies that would have an effect of reduce carbon emissions, including other environmental regulations and taxes, efforts at energy conservation, subsidies for non-carbon forms of energy, and the like. In fact, a look at the price of carbon in the ETS suggests that it might not be having much of a role. 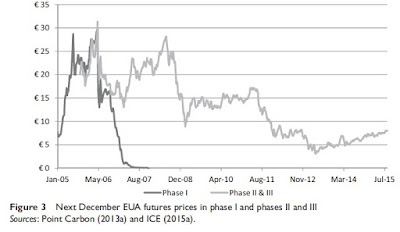 Notice that the price of allowances during "phase I" of the system fell all the way to zero: in other words, the allowed emissions of carbon were considerably above what was actually being emitted, so there was no additional cost for emitting. During phases II and III, the cost of emitting carbon has been at around €5 per ton of emissions, which is a lot lower than the price of about €30 per ton that is often recommended for making a realistic and useful dent in carbon emissions over time. To be blunt about it, the price data suggests that perhaps the EU ETS hasn't had much effect in reducing emissions, and may not have much effect looking forward.

Should the low price for carbon emissions be interpreted as a success story for an emissions trading system? After all, emissions are indeed down. Or should it be interpreted as a failure for an emissions trading system, and perhaps a sign that political pressures have led to a system where it has little effect? After all, emissions may be falling for other reasons and the current price of €5 just isn't very high.  Ellerman,  Marcantonini, and Zaklan describe the resulting debates in this way:


The great surprise of the second phase of the EU ETS was that, as phase III started in 2013, the price paid to emit carbon was less than €5, not the €30 or more that had been indicated by 2013 futures prices in 2008 and that was generally expected at that time. This development has created a lively debate about the future of the EU ETS and its role in climate policy. This debate can be summarized as being between those who view the current, much-lower-than-expected price as indicating serious flaws in the EU ETS and those who argue that the low price shows that the system is working exactly as it should given all that has happened since 2008 (i.e., reduced expectations for economic growth in the Eurozone, increased electricity generation from renewable sources, the significant use of offsets), including the possibility that abatement may be cheaper than initially expected. Fundamentally, this debate reflects differing views of the objectives of climate policy itself: whether the objective is solely to reduce GHG emissions or also (and perhaps principally) to transform the European energy system. Although no one is
suggesting that emissions have exceeded the cap, or that they will do so, current prices do not seem likely to lead to the kind of technological transformation that would greatly reduce Europe’s reliance on fossil fuels.

The other papers in the symposium make a case that the EU ETS policy should be regarded more as a partial success than as a partial failure. For example, Hintermann,  Peterson,  and Rickels write:

Although the EU ETS has been criticized from an environmental perspective because of its rather low carbon price signal, we believe that the policy has actually performed quite well from an economic point of view. It introduced a single price for emissions, which were previously a free public “bad,” and it correctly reflected the substantial oversupply of allowances in both phase I and phase II through a significant price drop. Moreover, the nonzero price toward the end of phase II, despite a nonbinding cap for the phase, reflected expectations of a cap on overall emissions that is binding in the long term, given the opportunity to bank allowances. ...

As is currently being discussed in the EU, the low allowance price could be counteracted through the use of new mechanisms such as price floors or strategic allowance reserves. However, a more direct (and environmentally beneficial) approach would be to tighten the cap, for example, by adjusting the rate at which it is decreased after 2020; because of banking, this should affect the price even today.  We would argue that the fact that allowance prices turned out to be lower than anticipated (and thus EU climate policy was cheaper than expected) should actually be interpreted as good news rather than a problem. After all, the main economic argument in favor of an emission allowance market is that it delivers a particular emissions goal at least cost.


Martin, Muûls, and Wagner focus on the specific sectors--energy and industry--that were directly regulated by the cap-and-trade arrangements under the ETS. They argue that there is little evidence the emissions trading system hurt these industries, and some evidence that it did accelerate their reduction in emissions and stimulate their innovation in cleaner-energy alternatives.

It seems to me that the best case one can make for the EU ETS after its first decade is along the lines of "it's a start." Sure, the prices are very low, but they aren't zero. Ellerman et al. emphasize that the ETS is set up in a way that over the long-run, it will become a binding constraint forcing carbon emissions to decline. They write:


Absent a decision by the EU to abandon the program, which would require a super-majority, the EU ETS will march on with a continually declining cap, which, under all likely scenarios, will create continuing scarcity, thus virtually guaranteeing that a carbon price will be a permanent feature of the European economic landscape.

Right now, the political pressures to change the rules in such a way as to allow a lower carbon price are quite muted. It will be interesting to see how the political pressures play out a few years down the road when the carbon constraint in the ETS start to push the price of the allowances higher, up to €30 per ton or perhaps considerably more.