Global Capital Flows: Why No Crisis (So Far) This Time?

Here's the puzzle. Outflows of international capital from emerging markets around the world played a key role in causing financial shocks and steep recessions all over the globe in the late 1990s, including the east Asian financial crisis affecting countries like Korea, Thailand, and Indonesia in 1997-98; Latin American countries like Brazil (1999) and Argentina (2001); along with an assortment of other places like Ukraine (1998) and Turkey (2000). But even larger outflows of  international capital from emerging markets have been occurring in the last few years, with much less dire economic consequences. What changed? The World Economic Outlook published by the IMF in April 2016 devotes a chapter to this subject: "Chapter 2: Understanding the Slowdown in Capital Flows to Emerging Markets."

Here's a figure that sets the stage by showing net capital inflows to emerging market economies since 1980. You can see the drop in capital inflows in the late 1990s, surrounded by various crises. The more recent drop was accompanied by some crises during the worse of the global recession of 2008 and its immediate aftermath, but not much since then. (The recent external financial crises in this data are Ukraine in 2014 and Albania in 2015.) 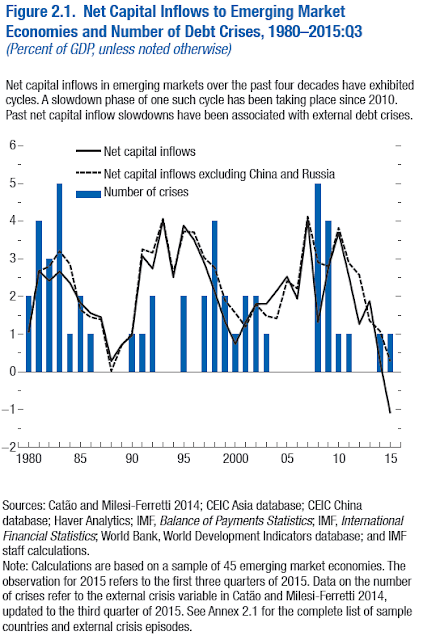 What changed? In the late 1990s, the destructive economic dynamic sometimes evolved like this. Banks and large companies in a country like Thailand would borrow in US dollars. They would convert those US dollars to the local currency--say, Thai baht--and then lend and spend that currency in Thailand. This process of borrowing in US dollars and lending in Thai baht seemed fairly safek because government policy had been to  keep exchange rates fixed (or close to it) over time. But when international capital inflows went into reverse, exchange rates declined. As a result, the big banks and companies that had borrowed in US dollars and loaned in Thai baht could not repay those US dollar loans. The government had often in some way guaranteed the stability of the banking system, but didn't hold much in the way of US dollar reserves, so the government finances ended up in trouble, too.

In the last five years, many elements of this interaction have changed, at least in part because all the players learned from the experiences of the late 1990s. Here are some examples from the IMF report:

Many of the big players emerging markets no longer need to borrow almost exclusively in US dollars; instead, they can now do a lot of borrowing in their own currency. As a result, they aren't exposed to the risk of exchange rate shifts. Here's a figure showing the rising ability of government and nongovernment borrowers in emerging markets to borrow in their own currency. 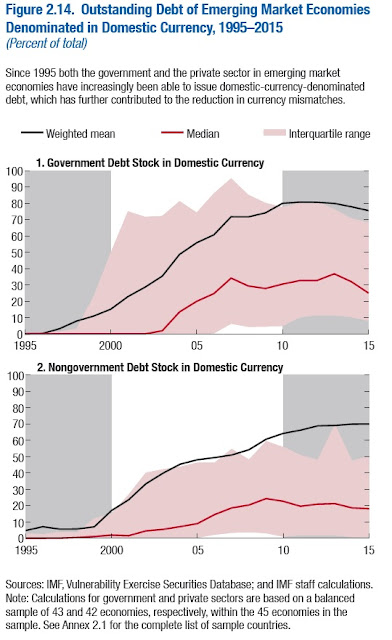 Many of the key emerging market no longer fix their exchange rate. What used to happen back in the 1980s and 1990s was that governments would claim to have a fixed exchange rate, which actually was a situation where the exchange rate was fixed for a time and then took a huge jump. Ongoing exchange rate adjustments mean that the players in the global economy are more likely to take the risks of exchange rate shifts into account, and the adjustments can be more gradual.

Many of the key emerging markets have built up substantial US dollar foreign reserves. Thus, if there is a sharp decline in capital inflows or an actual outflow, they can soften the effect of this change--at least for a time--by drawing down these foreign reserves.

The IMF report mentions some other factors, as well. But the central point is a bit of good news for the global economy: As emerging market economies are playing a larger role in global economic output, they are also becoming more integrated into the global financial system in more flexible ways. As a result, the cycles of inflows and outflows of international capital that caused severe disruptions and financial crises back in the 1980s and 1990s have had less power to do so in the last five years.
Posted by Timothy Taylor at 9:00 AM