On the surface, it's easy to sketch what a "good job" means: having a job in the first place, along with good pay and access to benefits like health insurance. But that quick description is far from adequate, for several interrelated reasons. When most of us think about a "good job," we have more than the paycheck in mind. Jobs can vary a lot in working conditions and predictability of hours. Jobs also vary according to whether the job offers a chance to develop useful skills and a chance for a career path over time. In turn, the extent to which a worker develops skills at a given job will affect whether that worker worker is a replaceable cog who can expect only minimal pay increases over time, or whether the worker will be in a position to get pay raises--or have options to be a leading candidate for jobs with other employers.

A majority of Americans do not consider themselves to be "engaged" with their jobs.  According to Gallup polling: "The percentage of U.S. workers in 2015 who Gallup considered engaged in their jobs averaged 32%. The majority (50.8%) of employees were "not engaged," while another 17.2% were "actively disengaged." ... Employee engagement entered a rather static state in 2015 and has not experienced large year-over-year improvements in Gallup's 15-year history of measuring and tracking the metric. Employee engagement has consistently averaged less than 33%." 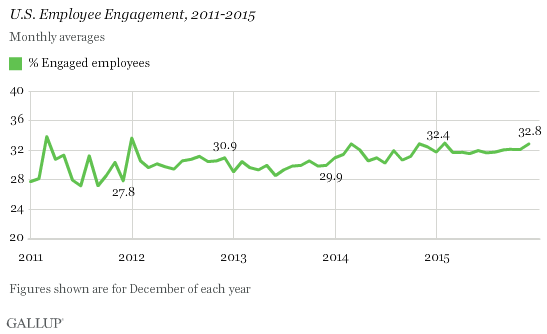 What makes a "good job" or an engaging job? The classic research on this seems to come from the Job Characteristics Theory put forward by  Greg R. Oldham and J. Richard Hackman back in a series of papers written in the the 1970s: for an overview, a useful starting point is their 1980 book Work Redesign.  Here, I'll focus on their 2010 article in the Journal of Organizational Behavior summarizing some findings from this line of research over time, "Not what it was and not what it will be: The future of job design research" (31: pp. 463–479).

Oldham and Hackman point out that from the time when Adam Smith described making pins and back in the eighteenth century up through when Frederick W. Taylor led a wave of industrial engineers doing time-and-motions studies of workplace activities in the early 20th century, and up through the assembly line as viewed by companies like General Motors and Ford, the concept of job design focused on the division of labor. In my own view, the job design efforts of this period tended to view workers as robots that carried out a specified set of physical tasks, and the problem was how to make those worker-robots more effective.

Whatever the merits of this view for its place and time, it has clearly become outdated in the last half-century or so. Even in assembly-line work, companies like Toyota that cross-trained workers for a variety of different jobs, including on-the-spot quality control, developed much higher productivity than their US counterparts. And for the swelling numbers of service-related and information-related jobs, the idea of an extreme division of labor, micro-managed at every stage, often seemed somewhere between irrelevant and counterproductive. When worker motivation matters, the question of how to design a "good job" has a different focus.

By the 1960s, Frederick  Herzberg is arguing that jobs often need to be enriched, rather than simplified. In the 1970s, Oldham and Hackman develop their Job Characteristics Theory, which they describe in the 2010 article like this:

Each of the first three of these characteristics, we proposed, would contribute to the experienced meaningfulness of the work. Having autonomy would contribute to jobholders felt responsibility for work outcomes. And built-in feedback, of course, would provide direct knowledge of the results of the work. When these three psychological states were present—that is, when jobholders experienced the work to be meaningful, felt personally responsible for outcomes, and had knowledge of the results of their work—they would become internally motivated to perform well. And, just as importantly, they would not be able to give themselves a psychological pat on the back for performing well if the work were devoid of meaning, or if they were merely following someone else’s required procedures, or if doing the work generated no information about how well they were performing.

Of course, not everyone at all stages of life is looking for a job that is wrapped up with a high degree of motivation. At some times and places, all people want is a steady paycheck. Thus, Oldham and Hackman added two sets of distinctions between people:


So we incorporated two individual differences into our model—growth need strength (i.e., the degree to which an individual values opportunities for personal growth
and development at work) and job-relevant knowledge and skill. Absent the former, a jobholder would not seek or respond to the internal ‘‘kick’’ that comes from succeeding on a challenging task, and without the latter the jobholder would experience more failure than success, never a motivating state of affairs.

There has been a considerable amount of follow-up work on this approach: for an overview, interested readers might begin with the other essays in the same 2010 issue of the Journal of Organizational Behavior that contains the Oldham-Hackman essay. Their overview of this work emphasizes a number of ways in which the typical job has evolved during the last 40 years. They describe the change in this way:


It is true that many specific, well-defined jobs continue to exist in contemporary organizations. But we presently are in the midst of what we believe are fundamental changes in the relationships among people, the work they do, and the organizations for which they do it. Now individuals may telecommute rather than come to the office or plant every morning. They may be responsible for balancing among several different activities and responsibilities, none of which is defined as their main job. They may work in temporary teams whose membership shifts as work requirements change. They may be independent contractors, managing simultaneously temporary or semi-permanent relationships with multiple enterprises. They may serve on a project team whose other members come from different organizations—suppliers, clients or organizational partners. They may be required to market their services within their own organizations, with no single boss, no home organizational unit, and no assurance of long-term employment. Even managers are not immune to the changes. For example, they
may be members of a leadership team that is responsible for a large number of organizational activities rather than occupy a well-defined role as the sole leader of any one unit or function.

In their essay, Oldham and Hackman run through a number of ways in which jobs have evolved in ways that they did not expect or undervalued back in the 1970s. For example, they argue that the
opportunities for enrichment in front-line jobs is larger than they expected, that they undervalued the
social aspects of jobs, that they didn't anticipate the "job crafting" phenomenon in which jobs are shaped by workers and employers rather than being firmly specified. They point out that although working in teams has become a phenomenon, employers and workers are not always clear on the different kinds of teams that are possible: for example, "surgical teams" led by one person with support; "co-acting teams" in which people act individually, but have little need to interact face-to-face; "face-to-face teams" that meet regularly as a group to combine expertise; "distributed teams" that can draw on a very wide level of expertise when needed, but don't have a lot of interdependence or a need to meet with great regularity; and even "sand dune" teams that are constantly remaking and re-forming themselves with changing memberships and management.

When you start thinking about "good jobs" in these broader terms, the challenge of creating good jobs for a 21st century economy becomes more complex. A good job has what economists have called an element of "gift exchange," which means that a motivated worker stands ready to offer some extra effort and energy beyond the bare minimum, while a motivated employer stands ready to offer their workers at all skill levels some extra pay, training, and support beyond the bare minimum. A good job has a degree of stability and predictability in the present, along with prospects for growth of skills and corresponding pay raises in the future. We want good jobs to be available at all skill levels, so that there is a pathway in the job market for those with little experience or skill to work their way up. But in the current economy, the average time spent at a given job is declining and on-the-job training is in decline.

I certainly don't expect that we will ever reach a future in which jobs will be all about deep internal fulfillment, with a few giggles and some comradeship tossed in. As my wife and I remind each other when one of us has an especially tough day at the office, there's a reason they call it "work," which is closely related to the reason that you get paid for doing it.

But with the unemployment rate now under 5%, the main issue in the workforce isn't a raw lack of jobs--as it was in the depths of the Great Recession--but instead is about how to encourage the economy to develop more good jobs. I don't have a well-designed agenda to offer here. But what's needed goes well beyond our standard public arguments about whether firms should be required to offer certain minimum levels of wages and benefits.