When it comes to processing transactions and borrowing money, the financial system works beautifully for my family. The bank doesn't charge us for depositing checks or withdrawing money, and we have enough money in the bank to qualify for a "free" checking account. The annual fee for our credit cards is smaller than the benefits they offer in terms of airline tickets, hotel rooms, and money back, so that as long as we make the payments on time, we come out ahead each year.  Getting a  home mortgage or a car loan is straightforward. If I needed a serious chunk of emergency cash, I could take out a home equity loan.

But for many low-income Americans, the financial system imposes additional costs that make it a harder for households that are already struggling to make ends meet. If they don't have a bank they pay for cashing checks and they pay for money orders. If they do have a bank account or credit cards, they often end up paying overdraft fees at the bank or late fees to the credit card company. Getting a home loan or a car loan is somewhere from difficult-and-costly to impossible. If they need short-term cash, they end up turning to pawn shops, payday loans. The Council of Economic Advisers offers some background on these issues in its June 2016 Issue Brief, "Financial Inclusion in the United States."

As a starting point, here are a couple of figures showing the trends in whether households have a "transaction account"--basically, a bank account. The share of households with a bank account is rising, but for families in the lower income percentiles, or for families with lower education levels (of course, these are often the same families), the chance of having a bank account remains substantially lower. 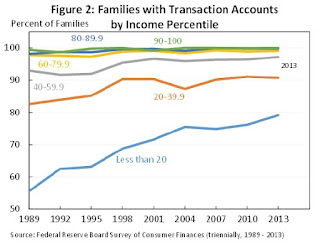 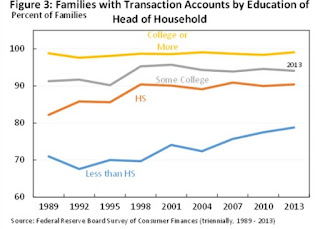 These families face out-of-pocket costs when dealing with the financial system.


The unbanked pay anywhere from 1 to 5 percent in fees to cash a check (depending in part on whether it is a paycheck or a government check since the latter come with lower risk for the check-casher). At an annual salary of $22,000 (the average for unbanked households), such fees can total over $1,000 a year in extra costs for unbanked households. ...

Many of the households that fall into this category have impaired credit histories and would fall into the “subprime” category. The products and services that these individuals may obtain from both bank and non-bank providers typically include money orders, check cashing, remittances, payday loans, auto title loans, and pawn shop loans (collectively known as small-dollar credit). ...

My main quibble with the report is its use of the currently fashionable term of "financial inclusion." As the text of the report notes, the underlying issues here are more prosaic and obvious than a broad term like "inclusion" might suggest.

There are ways to address some of these issues, like the widespread shift toward having government checks paid directly to bank accounts, rather than delivered through the mail, which can create a tie to a bank for those who have not previously had such a connection.  But most of the new financial technology firms or smartphone applications that one reads about require overcoming these more basic hurdles.

In my own thinking, there are two issues here that are somewhat separable. One is being able to carry out transactions like receiving checks or paying bills without needing to pay much in transactions costs for doing so. The other question, and it's a harder question, is about what happens to low-income Americans who need short-term loans. Because of low and sporadic income levels, they are not good candidates for conventional loans, and thus end up turning to the "small-dollar credit" options above. Not only do these short-term lending options have relatively high up front costs, if they are not repaid on time they often impose additional costs. But what's to be done? As the report notes:


Despite the potentially adverse impacts that arise from a reliance on unconventional sources of small dollar credit, these products provide a source of funds for households who might not otherwise be able to cover such crucial but often unanticipated expenses as emergency medical treatment, funeral and burial preparations, and urgent home or automobile repairs, or sometimes even to cover regular expenses. These types of products often take the place of conventional accounts. ... Moreover, some households depend on access to small-dollar credit not just for big, one-time expenditures but also for covering general, day-to-day living expenses, such as rent and utility payments. One survey found that 2 in 5 title loan users report using the borrowed funds for rent or utilities while about a quarter of borrowers used the loan for medical expenses or car repairs.

It's easy enough to deplore how these small-dollar credit institutions operate, and how people start by taking out one loan and end up trapped in a web of ever-growing debts. (Incidentally, the public sector isn't innocent here, either, with a growing practice in recent years of imposing ever-greater fines, and then additional fines for not paying the earlier fines on time, which can weigh heavily on low-income families.) I've written here in the past about the issues with payday loans, in particular (for example, here, here and here).

But those with low incomes who are facing a sudden need for cash--an emergency medical costs, or a car repair that's the difference between getting to work or not, or the possibility of having their power and water cut off, or being evicted from an apartment--may not have any especially appealing options. Before acting to limit or reduce the options that they do have, like the recent rules that seek to limit payday lending, it's useful to think about what is going to happen to some of the people who can't get that loan they need.

Aaron Klein of the Brookings Institution offers a useful primer on these issues in "Understanding non-prime borrowers and the need to regulate small dollar and "payday" loans," a short, readable paper published on-line on May 19, 2016.
Posted by Timothy Taylor at 8:00 AM