An enormous number of pixels are spent on renewable energy, but when one looks at actual numbers, we are still living in a fossil fuel world. Here are some illustrative charts from the most recent annual BP Statistical Review of World Energy, released June 2016.

Here's a breakdown of world energy consumption. The big slices are all fossil fuels: green is oil; red is natural gas; grey is coal. The little slices are carbon-free sources of energy: nuclear is light orange, hydroelectric is blue, and renewables are darker orange. As the report notes: "Oil remains the world’s dominant fuel and gained global market share for the first time since 1999, while coal’s market share fell to the lowest level since 2005. Renewables in power generation accounted for a record 2.8% of global primary energy consumption." 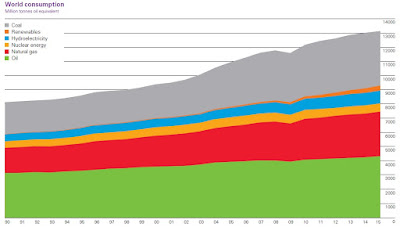 Reserves of fossil fuels are not running down. Here are figures showing the years remaining of reserves of oil, natural gas, and coal. The figures show a breakdown by region, which isn't especially relevant given that energy can be shipped between regions. Instead, focus on the gray line showing reserves at the world level. Reserves of oil and natural gas, as measured by years remaining, are not declining over time. Reserves of coal are declining, but there is more than century of reserves remaining. It may seem obvious that reserves must decline over time, but technological change doesn't just work with renewables like solar and wind. It also finds new sources of fossil fuels and new methods of extraction. 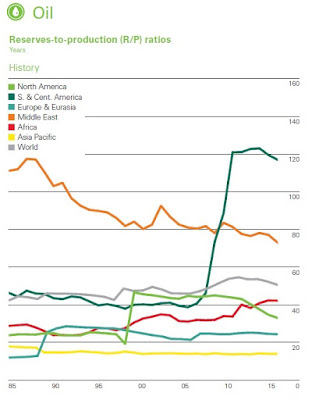 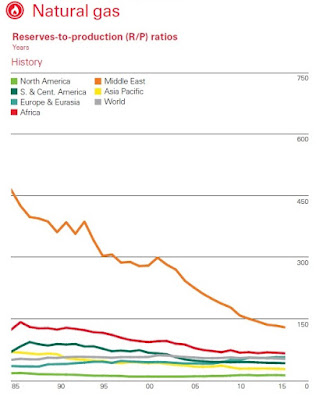 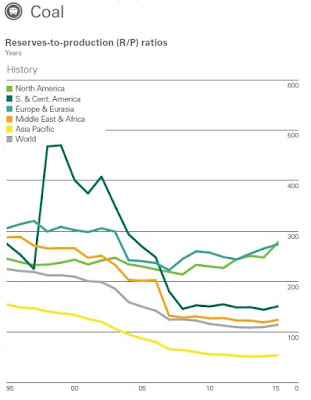 In short, if your environmental goals involve a reduction in the use of fossil fuels over time, this goal is unlikely to happen because the world starts running low on fossil fuels. Instead, it's more likely to require some significant policy changes to discourage the use fossil fuels. For a more detailed version of this argument, along with a complementary argument that technological progress by itself is unlikely to drive a smooth shift over to renewable energy sources, a nice starting point is the article by Thomas Covert, Michael Greenstone, and Christopher R. Knittel, "Will We Ever Stop Using Fossil Fuels?" in the Winter 2016 issue of the Journal of Economic Perspectives.  (Full disclosure: I've worked as Managing Editor of JEP since the first issue back in 1987.)