Ticket-Splitting in US Elections

2) The two years with the highest level of ticket-splitting were also years in which a presidential candidate won in a landslide. More or less by definition, winning by a landslide means picking up a lot of voters of the other party--but many of those voters presumably split their ticket and voted for a Congressman of their own party. Thus, the biggest years for ticket-splitting, according to this measure, were the Reagan wipeout in 1984, the Nixon landslide in 1972. 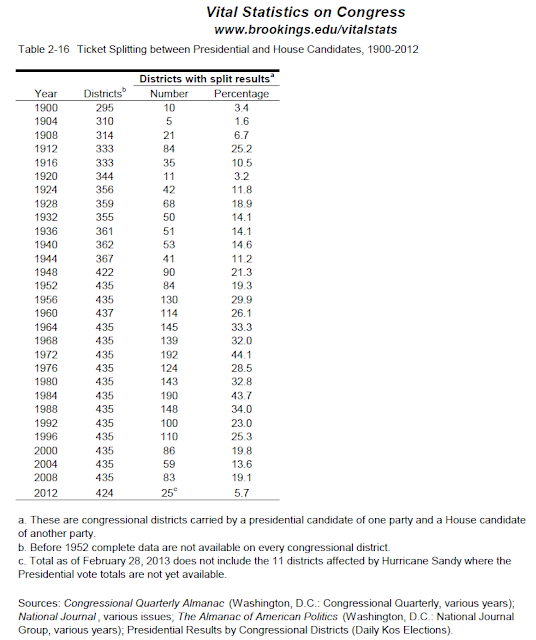 Here's another Ornstein, Mann, and Malbin chart on ticket-splitting. (In this one, I cut a few of the columns to make it easier to focus on some main themes.) In this measure, voters are asked a series of questions to classify their party leanings. The question then is what share of voters cast a ballot aligned with their partisan preferences in presidential, Senate, and House elections.

1) Again, the general pattern is toward people being more likely to vote in a way that follows their partisan beliefs. The last few elections show partisan beliefs being followed by more than 80% of voters, which is higher than was common from the 1960s through the 1990s (although elections back in the late 1950s had a similar degree of partisanship).

2) There doesn't seem to be a clear pattern of partisanship being stronger in presidential than in congressional elections, or vice versa. It does appear that the extent of partisan voting across these three types of elections tends to rise and fall together--that is, some elections are more partisan at all levels than others. 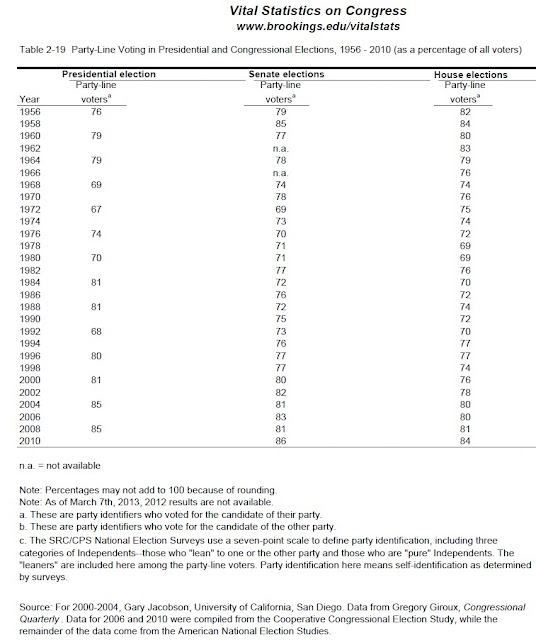 There's certainly nothing wrong with taking a political side, and it follows that there's nothing wrong with partisanship. However, it does seems sometimes that people have strong attachments or reaction to the labels of "Democratic" or "Republican" or "Green" or "Libertarian" with relatively little thought about about what underlying beliefs they truly hold and the extent to which a given politician embodies those beliefs. Those on "your side" are forgiven everything; those on the "other side" are forgiven nothing. Jerry Seinfeld had a monologue at the start of a 1995 show about rooting for the trappings, rather than the person. He said:

"Loyalty to any one sports team is pretty hard to justify. Because the players are always changing, the team can move to another city, you're actually rooting for the clothes when you get right down to it. You know what I mean, you are standing and cheering and yelling for your clothes to beat the clothes from another city. Fans will be so in love with a player but if he goes to another team, they boo him. This is the same human being in a different shirt, they *hate* him now. Boo! different shirt!! Boo."

It seems to me that some of those who bewail a high degree of  political polarization and partisanship are also  people who may almost never have voted  for someone outside their own preferred party--no matter what actual person is running on their party's ticket. If a politician switched parties, their beliefs about that politician would also switch. In other words, they are opposed to partisanship on the other side, but not their own. Personally, I'm all for a healthy amount of partisanship, as long as its not just voting for the clothing, and is rooted in actual beliefs and skills of particular candidates.
Posted by Timothy Taylor at 8:00 AM