How much any country or region contributes to global economic growth is based on two factors: the size of the economy of that country or region, and how fast that region is growing. China's economy is now big enough, and is (still) growing quickly enough, that it is now contributing as much to global economic growth at the advanced economies of the world. Here's a figure from the African Development Outlook 2016, which is an annual report written by the African
Development Bank, the OECD Development Centre and the United Nations Development
Programme. 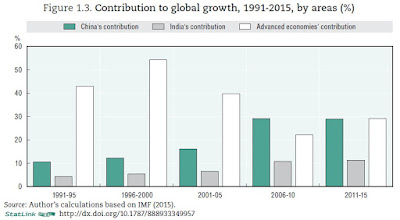 I still fairly often run into an implicit attitude that the US, or perhaps the US and the rest of the high-income countries taken together, dominate the global economy and can set the rules. That's a very twentieth-century point of view.
Posted by Timothy Taylor at 8:00 AM