Remittances refers to money that emigrants send back to their country of origin, and in the context of global capital flows, they are a big deal. The report Migration and Remittances: Recent Developments and Outlook, published by Global Knowledge Partnership on Migration and Development (KNOMAD) in April 2016, offers an overview of trends and patterns. (For the record, KNOMAD is funded by the governments of Germany, Sweden, and Switzerland, and administered by the World Bank.)

Consider four of the ways in which capital can move to the economies developing countries: 1) foreign direct investment (that is, having an ownership share in the investment); 2) private and equity; 3) official development assistance; and 4) remittances. Back in the mid-1990s, these four were all very roughly the same size, or at least within shouting distance of each other. But while official development assistance has risen a bit, the other three categories have all grown dramatically, as shown in the figure. 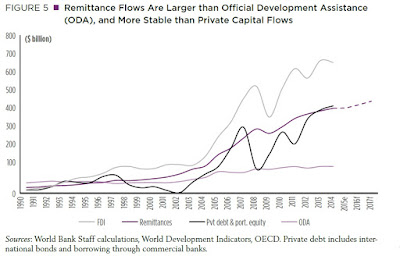 Remittances are about the same size as flows of private debt and equity. And while remittances haven't grown as fast as foreign direct investment, it has risen much more steadily and without the peaks and valleys. Remittances aren't driven by the fluctuations and trend-chasing that affect foreign direct investment and private investments in debt and equity. But remittances are affected by broad economic changes: for example, the fall in the price of oil means that remittances from Russia dropped, while the improvement in the US economy in the last few years has helped to raise remittances moving from the US to Latin America.But the 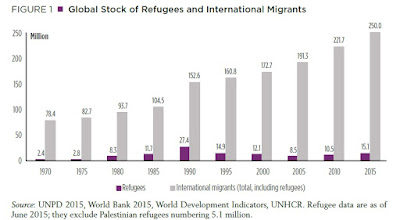 Another change is that it has become cheaper and easier over time for a worker to send funds back to his or her country of origin. The decline in the last few years is mild, but real. However, I suspect that if comparable statistics were available for the 1990s, the task of sending funds home would be considerably more complex and costly. 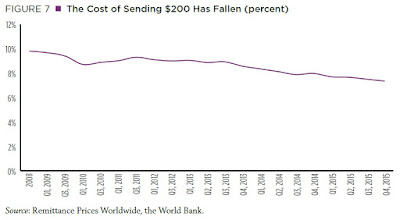 Remittances don't get as much attention as they deserve. We're often focused on the international capital flows connected with government, or with big global banks and businesses. But while remittances are very large overall at $433 billion in 2015, they mainly consist of relatively small-scale payments happening between family and community networks. In many cases, remittances provide the cash for ordinary families to start a small business or pay for extra education. The report points out that when there is a natural disaster in many countries, remittances to that country rise substantially as people around the world help out.

For a more detailed overview of this topic, I recommend Dean Yang's article on "Migrant Remittances" in the Spring 2011 issue of theJournal of Economic Perspectives as a starting point. (Full disclosure: I've labored in the fields as Managing Editor of JEP since the first issue in 1987.)
Posted by Timothy Taylor at 8:00 AM