Demographic shifts are about more than economics. Think about an array of social institutions: schools, parks, libraries, building and housing codes, public transportation, health care, the size of the volunteer sector. All of these, and many others, take on differing importance and shape when an economy has a relatively high number of children, or working-age people, or retirees. Deloitte has published the third edition of Voice of Asia (September 2017), with a focus on "Demographics fuelling Asia’s shifting balance of power." Here are some thoughts from the report.

This figure shows the working-age share of the total population for Japan, China, and India. In Japan, this percentage rose and peaked during its period of rapid economic growth in the 1960s and 1970s. For China, the percentage rose in recent decades, and is now forecast to drop sharply. For India, the percentage is still rising. 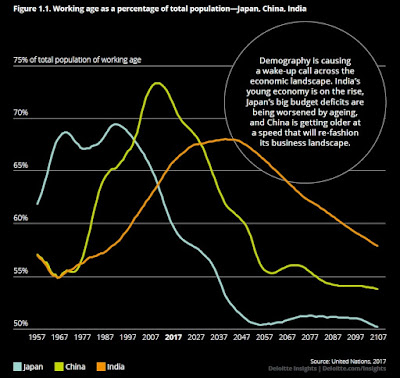 The report notes: "India will account for more than half of the increase in Asia’s workforce in the coming decade. The consequences for businesses are vast: An Indian summer is coming, and it will last half a century. And while India’s rise might have the largest impact on the world, it isn’t the only economy set to surge, with Indonesia and the Philippines on track to enjoy similar trends. Both of these nations have a relatively young population, mainly because they still have birth rates in excess of the global average. This makes demographics a tailwind rather than a headwind for their growth across at least the next 20 years."

Or to put it another way, the median age in Japan is 47 years; in China, 37 years; in India, 27 years. These are dramatic differences. In the table, you can see where other Asian countries stand in terms of being older or younger. 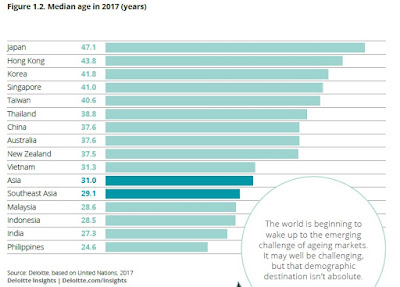 The potential implications of these patterns are substantial. For example, "China will get old before it
fully succeeds in getting rich." The political implications of that fact, given that the Chinese Communist Party has essentially been using economic growth as a justification for maintaining its hold on power, could be severe. If China, which by some measures is now the largest economy in the world, follows Japan's pattern of aging and economic stagnation, it will have a powerful effect on the growth rate of the global economy.

Of course, there is no guarantee that the growth of India's working-age population will power economic growth. But there's a powerful opportunity for it to do so, if India can continue with economic and social reforms (for some discussion, see here and here).

Here's a figure to emphasize the point. Europe and North America are aging. What's happening in Asia in the next few decades will be such a powerful demographic that it seems to require a stronger word than "aging." 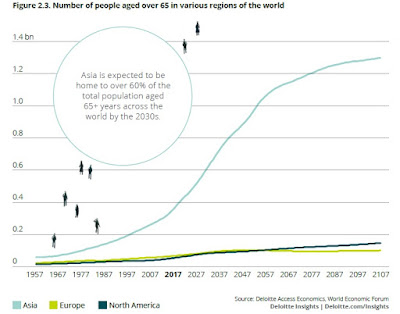 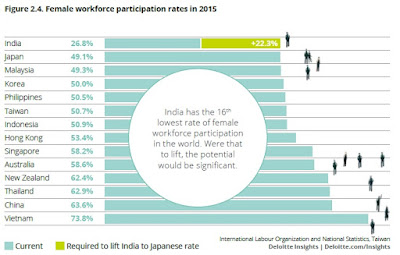 It is of course not literally true that "demography is destiny," as an old saying has it, but it can matter a great deal for the growth rate and sectoral patterns of economies. With China's working-age share of its population topping out and India's on the rise, we are at the hinge of a demographic transition that will reshape relative economic (and probably also political) power across Asia.
Posted by Timothy Taylor at 9:00 AM