When I posted a couple of days ago on the most recent Census Bureau report about "Health Insurance Coverage in the United States," I didn't know that the Congressional Budget Office was about to come out with an updated set of estimates for "Federal Subsidies for Health Insurance Coverage for People Under Age 65: 2017 to 2027" (September 2017). Obviously, it's useful to consider the number of people with health insurance and the government subsidies at the same time!

The CBO calculation is that federal subsidies for those under age 65 (that is, not counting Medicare spending on those over 65, and not counting the portion of Medicaid funded by US states) are $705 billion in 2017. Here's the graph from the cover of the report summarizing these subsidies: 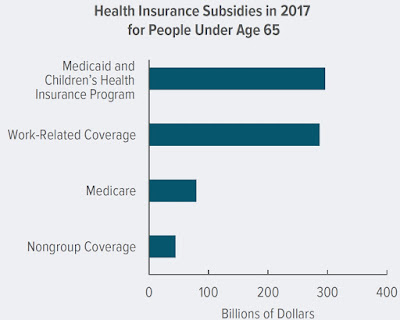 2) The Patient Protection and Affordable Care Act of 2010 increased these federal subsidies in 2017 by $117 billion: that is $72 billion for expansions of Medicaid coverage and $45 billion for subsidies involving the state-based insurance exchanges that are called the "Basic Health Plan."

3) The federal government subsidizes employer-provided health insurance to the tune of $279 billion in 2017 by treating it as an untaxed fringe benefit. The single largest method through which Americans get their health insurance continues to be employer-based coverage. 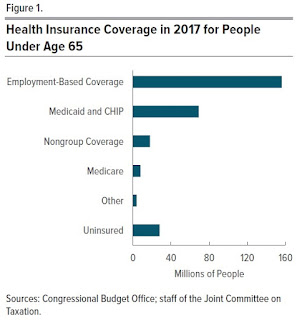 4) The Patient Protection and Affordable Care Act of 2010 expanded Medicaid enrollment by about 13 million people, and another 8 million have received subsidies for purchasing insurance on the state-level exchanges.

5) It's a little tricky to calculate how much the Affordable Care Act of 2010 expanded coverage. For example, if some employers decided to stop providing health insurance with the idea that their employees could turn to the state-based health  insurance exchanges, one would need to take those effects into account. But as a back-of-the-envelope estimate, one could reasonably say that the Affordable Care Act provide health insurance for about 21 million people, with a corresponding increase in federal health care subsidies of $117 billion. Thus, the average cost of person of expanded health insurance coverage has been about $5,500. As I've written before, there was never any mystery in how the 2010 legislation expanded insurance coverage: if the federal government was willing to spend an extra $117 billion, it could provide insurance coverage for another 21 million people.

6) A substantial number of US residents continue to lack health insurance. The CBO breaks it down this way: "Over the next decade, roughly 1 out of every 10 residents under age 65 is projected
to be uninsured each year, and the number of people who are uninsured is projected to be 31 million in 2027 ...  In that year, according to CBO and JCT’s estimates, about 30 percent of those uninsured
people would be unauthorized immigrants and thus ineligible for subsidies through a marketplace or for most Medicaid benefits; about 10 percent would be ineligible for Medicaid because they lived in a state that had not expanded coverage; about 20 percent would be eligible for Medicaid but would not enroll; and the remaining 40 percent would not purchase insurance to which they had access through an employer, through the marketplaces, or directly from insurers."

7) For ll the controversy surrounding the 2010 health care legislation, both at the time and since, it was essentially incremental. For most Americans with health insurance--most of those with employer-provided plans, Medicare, or already eligible for Medicaid--the 2010 act did not disrupt their health insurance in any substantial way.
Posted by Timothy Taylor at 9:23 AM