When (not "if") the next recession arrives, the Federal Reserve will want to take action to stimulate the economy. In recent decades, this action has often involved cutting a certain targeted interest rate--the "federal funds interest" rate--by 3-4 percentage points. However, the federal funds interest rate is now in the range of 1-1.25%, and for a variety of underlying reasons, it seems unlikely that these rates will climb to the 4-5% range any time soon.  Thus, central banks around the world are experimenting with nontraditional tools of monetary policy. For example, a number of central banks have pushed their own targeted policy interest rates into mildly negative territory, with what seems to be mild success so far. The US Federal Reserve, along with a number of other central banks, has engaged in "quantitative easing" policies in which the central bank buys financial assets directly. So far, the Fed has focused on Treasury debt and on mortgage-backed securities. But when the next recession  hits, should the Fed think about buying government bonds?

Thomas Belsham and Alex Rattan provide an overview of the issues that arise in making this choice, along with a review of what has happened since the Bank of England made a decision in August 2016 purchase up to £10 billion in corporate bonds, in their article "Corporate Bond Purchase Scheme:design, operation and impact," which appears in the Quarterly Bulletin of the Bank of England (2017 Q3, pp. 170-181).

Why might a central bank decided to purchase corporate bonds at all, as opposed to other assets?

If more parties in the market are willing to buy bonds--whether government bonds, corporate bond, or mortgage-backed securities-- it should be easier for borrowers to issue such securities. But Belsham and Rattan offer a few arguments as to why buying corporate bonds might have a bigger effect on the real economy than buying government bonds.

For example, they argue that when a central bank buys investment-grade bonds, which are typically issued by larger companies, those large companies become more likely to obtain capital by issuing bonds and less likely to do so through borrowing from banks. In turn, this could cause banks to become more willing to lend money to medium-sized and smaller-sized firms. Another reason is that part of the risk in bond markets is that such markets are often not very liquid, meaning that it isn't always easy to buy or sell bonds right away--at least not without taking a hit on your desired price. But if the central bank is steadily involved as a buyer of bonds, liquidity in the bond market improves, and the risk of holding bonds diminishes accordingly. Finally, when a central bank buys corporate bonds, those who had previously been holding the bonds (or would have been holding the bonds) clearly have some appetite for the risks and returns associated with corporate activities, so they are likely to try to seek out some other ways to invest their funds into active corporate activities (rather than into lower-risk and safer investments).

If a central bank decides to purchase corporate bonds, how can it keep the risk of doing so relatively low and avoid favoritism to certain industrial sectors or specific corporations?

The Bank of England was willing to buy up to £10 billion in "investment-grade" corporate bonds (that is, relatively safe bonds, not high-yield, high-risk "junk bonds"). For comparison, the total amount of such bonds was about £500 billion. The goal of the BoE was to purchase these bonds without unbalancing the market.

In a regular auction, buyers compete to purchase an item. However, the Bank of England purchased bonds with a "reverse auction," in which sellers compete to sell an item--in this case a bond--to the central bank. Thus, the Bank of England was agreeing to pay the lowest possible interest rates (and there was also a "maximum price" that the Bank would not exceed when purchasing any given bond). In addition, the Bank of England looked at how much of the  £500 billion in bonds came from each sector of the economy, and took care to purchase bonds (tweaking the prices it was willing to pay just a bit as needed) so the Bank ended up owning bonds from each sector in the same proportion as these sectors were represented in the overall bond market.


What were some effects of the Bank of England Corporate Bond Purchase Scheme?
One quick-and-dirty way to evaluate the effects of this policy is to compare interest rates on corporate bonds of similar risk levels that are denominated in US dollars, euros, and pounds. If one sees a drop in the interest rate for these corporate bonds around the time the policy starts, a drop which isn't mirrored in the other markets, it suggests the policy had some effect. 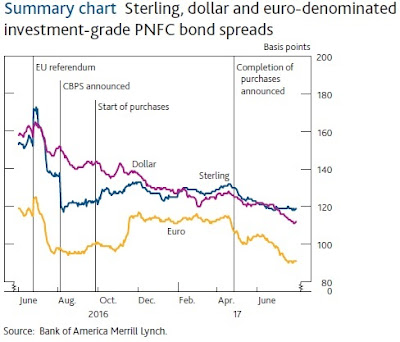 The authors carry out some more sophisticated calculations, which tend to confirm this general result. They write: "Sterling-denominated investment-grade private non-financial corporate (PNFC) bond spreads fell 10 basis points on the day of the announcement of the CBPS, and around a further
10 basis points in the days that followed. Issuance in sterling by UK PNFCs picked up sharply after the announcement, with the highest recorded monthly issuance of sterling-denominated investment-grade bonds in September of that year. Market intelligence also suggests that there was an improvement in liquidity in the sterling corporate bond market ... While the direct impact on the corporate bond market is encouraging, it is still too early to assess fully the transmission of the Corporate Bond Purchase Scheme to the real economy."

The current plan is that as bonds make payments and mature, these amounts will be reinvested into other bonds. Thus, the Bank of England portfolio of corporate bonds is planned to remain at about £10 billion -- at least for now.

This experiment is worth watching. If the US Federal Reserve feels a need during a future recession to carry out large-scale quantitative easing, the Bank of England process is likely to serve as a model. It would be interesting, and perhaps not in a good way, to watch the political pressure that would surely be exerted if the US Federal Reserve attempting to purchase corporate bonds in a way that doesn't intervene to favor certain parts of the bond market.