Wealth Patterns in the United States

Wealth is not income. Income is what you receive in a certain period of time, perhaps a year. Wealth adds up all of your assets--bank account, value of equity in home, retirement savings, and so on. A substantial portion of retirees have high wealth, but low income. A substantial portion of young professionals in their 30s have high income, but (once their outstanding debts are taken into account), little wealth. The canonical source for looking at US wealth patterns is the Survey of Consumer Finances, carried out triennially by the Federal Reserve.

Results and highlights from the 2016  SCF appear in "Changes in U.S. Family Finances from 2013 to 2016: Evidence from the Survey of Consumer Finances," in the Federal Reserve Bulletin (Summer 2017, in an article with a double-handful of co-authors: Jesse Bricker, Lisa J. Dettling, Alice Henriques, Joanne W. Hsu, Lindsay Jacobs, Kevin B. Moore, Sarah Pack, John Sabelhaus, Jeffrey Thompson, and Richard A. Windle. The detailed survey results are here. The SCF and this article also look at patterns of income, but income data is readily available from other sources. Here, I'll focus on the discussion of wealth. 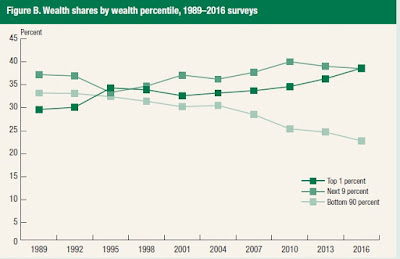 More from the report: "These patterns in net worth over the past several surveys were largely driven by the Great Recession and subsequent recovery in house and other asset prices. Declines in house prices in particular had a disproportionate effect on families in the middle of the net worth distribution, whose wealth portfolio is dominated by housing. Divergent trends in median and mean net worth over the past few surveys suggest substantial heterogeneity in wealth changes across families."

The report offers a detailed breakdown of financial and nonfinancial assets (like home equity) held by families, and also of different types of debts. However, some definitional issues should be noted. For example, are the Social Security payments you expect to receive after retirement an "asset" for you? In a broad economic sense, the answer is clearly "yes." But people do not have ownership of that asset in the way that they own their retirement account or their house, and putting a number on the current value of that asset requires making a bunch of assumptions about future patterns of work and marriage and possible political changes to Social Security. Thus, it isn't included in the SCF measure of wealth. As the report says: "Although the SCF measure of wealth is fairly comprehensive, some assets that may be widely held, such as defined-benefit pension and Social Security wealth, are not included in net worth definitions because of the many assumptions required to estimate their values."

Here's a table (a trimmed-down version of a larger table) from the report, showing some patterns of wealth.  One big difference that jumps out is the difference between "median" and "mean." Median net worth for all US families is $97,300, while mean net worth is $692,100. 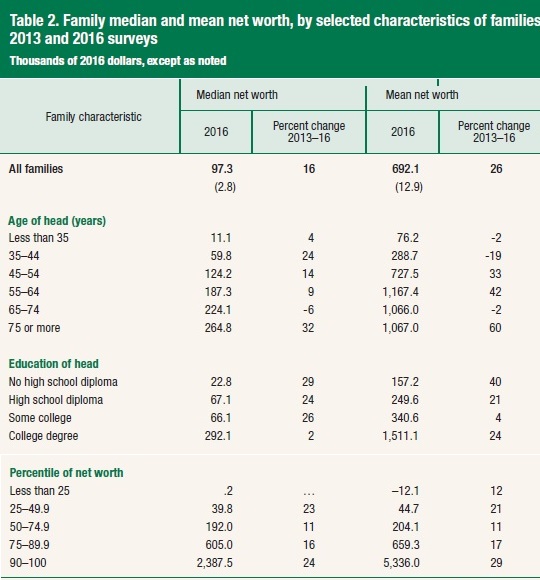 Why such a huge gap?  For those who last encountered those definitions some years ago, "median" is technically the value where half of the values are above and half are below. Mean is the  average: that is, total sum divided by the number of people. When there are a small number of very high values, the mean will be much higher than the median. For an intuitive grip on the difference, imagine a three-person economy, where one person has $0 in wealth, one has $30,000 in wealth, and one has $3 million in wealth. The median here would be $30,000, with equal numbers of people above and below that value. The mean would be $3,030,000/3, which would be $1,010,000.

As the table shows, it's broadly true that those who are older or who have better education levels also tend to have higher net worth. However, mean net worth does tend to diminish just a bit for the older age groups, which makes some sense if that group is consuming wealth and passing it wealth to younger groups. The bottom half or so of the American population has relatively little in net worth, but it's not obvious from this table how big a problem that is. After all, one would expect most people in their 20s to have little net worth, and even people in their 30s who potentially have big home mortgages and high student debts might not have high net worth. The more troublesome groups, which are not the focus of this overview report, would be those in their 40s who are not yet taking real steps to accumulating wealth, or those in their 50s and 60s who are approaching retirement but have not yet accumulated much wealth.
Posted by Timothy Taylor at 9:00 AM