The Limited Exposure of the US Economy to Trade

Listening to complaints about the effects of globalization on the US economy, one might be tempted to believe that the US economy is more exposed to the pressures of global trade than most other countries, and that the US market is uniquely open to world trade. countries.

Moreover, US markets are not especially open to international trade. The evidence comes from the fourth edition of the International Chamber of Commerce Open Markets Index 2017. The index rates 75 large economies across the world in four broad areas: observed openness to trade; trade policy settings; foreign direct investment (FDI) openness; and trade-enabling infrastructure. These scores are combined to a ranking on a scale from 1 (least open) to 6 (most open). The US economy is in a tie for 40th place in openness. Here are the rankings: 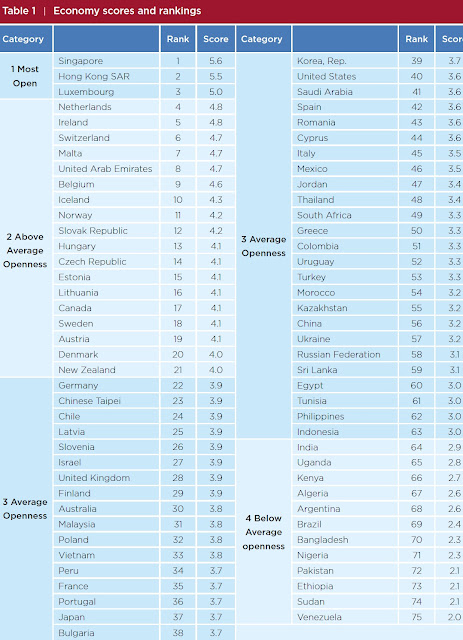 Among the group of larger economies around the world known as the G20, the US ranks 8th, behind Japan, Germany, Canada, Korea, and others in this measure of trade openness. In the more detailed analysis, the US scores higher in the categories of explicit trade policy and trade-enabling infrastructure, about average on openness to foreign direct investment, and below average on "observed openness to trade."

Globalization and trade are forces of economic disruption and change, and those forces have grown stronger in recent decades. But the notion that the enormous US economy is vulnerable to international trade or especially buffeted by the winds of trade just doesn't hold up.
Posted by Timothy Taylor at 9:34 AM