Economists are often queasy about the idea that preferences can be measured by surveys. It's easy for someone to say that they value organic fruits and vegetables, for example, but when they go to the grocery, how do they actually spend their money?

However, in some contexts, prices are not readily available. A common example is an oil spill, like the BP Deepwater Horizon Oil Spill in the Gulf of Mexico in 2010, or the Exxon Valdez oil spill in Alaska back in 1989. We know that such spills cause economic costs to those who use the waters directly, like the tourism and fishing industries. But is there some additional cost for "non-use" value? Can I put a personal value on protecting the environment in a place where I have not visited, and am not likely to visit?  There are various ways to measure these kinds of environmental damages. For example, one can include the costs of clean-up and remediation. But another method is to try to design a survey instrument that would get people to reveal the value that they place on this environmental damage, which is called a "contingent valuation" survey.

Such a survey has been completed for the BP Deepwater Horizon Oil spill. Richard C. Bishop and 19 co-authors provide a quick overview in "Putting a value on injuries to natural assets: The BP oil spill" (Science, April 21, 2017, pp. 253-254). For all the details, like the actual surveys used and how they were developed, you can go to the US Department of the Interior website (go to this link, and then type "total value" into the search box).

The challenge for a contingent valuation study is that it would obviously be foolish just to walk up to people and ask: "What's your estimate of the dollar value of the damage from the BP oil spill?" If the answers are going to be plausible, they need some factual background and some context. Also, they need to suggest, albeit hypothetically, that the person answering the survey would need to pay something directly toward the cost. As Bishop et al. write:


"The study interviewed a large random sample of American adults who were told about (i) the state of the Gulf before the 2010 accident; (ii) what caused the accident; (iii) injuries to Gulf natural resources due to the spill; (iv) a proposed program for preventing a similar accident in the future; and (v) how much their household would pay in extra taxes if the program were implemented. The program can be seen as insurance, at a specified cost, that is completely effective against a specific set of future, spill-related injuries, with respondents told that another spill will take place in the next 15 years. They were then asked to vote for or against the program, which would impose a one-time tax on their household. Each respondent was randomly assigned to one of five different tax amounts: $15, $65, $135, $265, and $435 ..."

Developing and testing the survey instrument took several years. The survey was administered to a nationally-representative random sample of household by 150 trained interviewers. There were 3,646 respondents. They write: "Our results confirm that the survey findings are consistent with economic decisions and would support investing at least $17.2 billion to prevent such injuries in the future to the Gulf of Mexico’s natural resources."


"To test for sensitivity to the scope of the injury, respondents were randomly assigned to different versions of the questionnaire, describing different sets of injuries and different tax amounts for the prevention program. The smaller set of injuries described the number of miles of oiled marshes, of dead birds, and of lost recreation trips that were known to have occurred early in the assessment process. The larger set included the injuries in the smaller set plus injuries to bottlenose dolphins, deep-water corals, snails, young fish, and young sea turtles that became known as later injury studies were completed  ..."


Here's a sample of the survey results. The top panel looks at those who had the survey with the smaller set of injuries. It shows a range of how much taking steps to avoid the damage would personally (hypothetically) cost the person taking the survey. You can see that a majority were willing to pay $15, but the willingness to pay to prevent the oil spill declined as the cost went up. The willingness to pay was higher for the larger set of injuries, but at least my eye, not a whole lot larger. 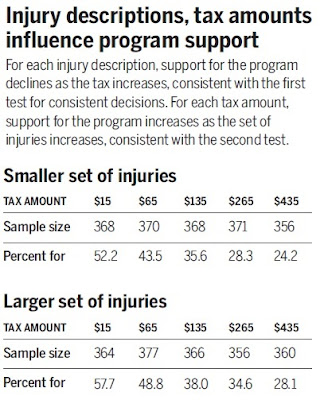 It should be self-evident why the contingent evaluation approach is controversial. Does the careful and extensive process of  constructing and carrying out the survey lead to more accurate results? Or does it in some ways shape or predetermine the results? The authors seem to take some comfort in the fact that their estimate of $17.2 billion is roughly the same as the value of the Consent Decree signed in April 2016, which called for $20.8 billion in total payments. But is it possible that the survey design was tilted toward getting an answer similar to what was likely to emerge from the legal process? And if the legal process is getting about the same result, then the contingent valuation survey method is perhaps a useful exercise--but not really necessary, either.

I'll leave it to the reader to consider more deeply. For those interested in digging deeper into the contingent valuation debates, some useful starting points might be:

The Fall 2012 issue of the Journal of Economic Perspectives had three-paper symposium on contingent valuation with a range of views:

H. Spencer Banzhaf has just published  "Constructing Markets: Environmental Economics and
the Contingent Valuation Controversy," which appears in the Annual Supplement 2017 issue of the History of Political Economy (pp. 213-239). He provides a thoughtful overview of the origins and use of contingent valuation methods from the early 1960s ("estimated the economic value of outdoor recreation in the Maine woods") up to the Exxon Valdez spill in 1989.

Harro Maas and Andrej Svorenčík tell the story of how Exxon organized a group of researchers in opposition to contingent valuation methods in the aftermath of the 1989 oil spill in "`Fraught with Controversy': Organizing Expertise against Contingent Valuation," appearing in the History of Political Economy earlier in 2017 (49:2, pp. 315-345).

Also, Daniel McFadden and Kenneth Train edited a 2017 book called Contingent Valuation of Environmental Goods, with 11 chapters on various aspects of how to do and think about contingent valuation studies. Thanks to Edward Elgar Publishing, individual chapters can be freely downloaded.
Posted by Timothy Taylor at 8:00 AM