Opioids: Brought to You by the Medical Care Industry

There's a lot of talk about the opioid crisis, but I'm not confident that most people have internalized just how awful it is. To set the stage, here are a couple of figures from the 2018 Economic Report of the President. 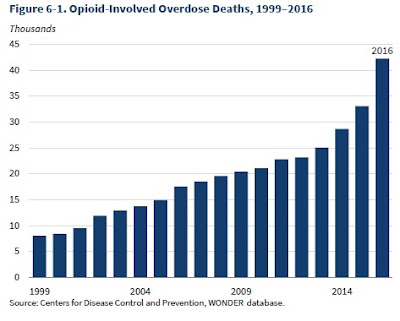 However, the nature of the opioid crisis is shifting. The rise in overdose deaths from 2000 up to about 2010 was mainly due to prescription drugs. The more recent rise is overdose deaths is due to heroin and synthetic opioids like fentanyl. 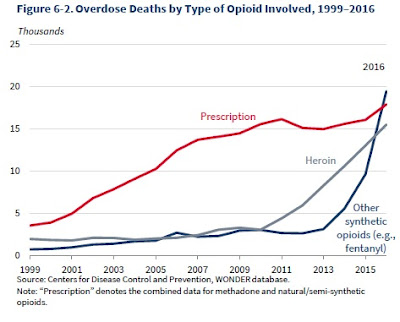 It seems clear that the roots of the current opioid crisis are in prescribing behavior: to be blunt about it, US health care professionals made the decisions that created this situation. The Centers for Disease Control and Prevention notes on its website: "Sales of prescription opioids in the U.S. nearly quadrupled from 1999 to 2014, but there has not been an overall change in the amount of pain Americans report. During this time period, prescription opioid overdose deaths increased similarly."

The CDC also offers a striking chart showing differences in opioid prescriptions across states. Again from the website: "In 2012, health care providers in the highest-prescribing state wrote almost 3 times as many opioid prescriptions per person as those in the lowest prescribing state. Health issues that cause people pain do not vary much from place to place, and do not explain this variability in prescribing."

But although the roots of the opioid crisis come from this rise in prescriptions, the problem of opioid abuse itself is more complex. What seems to have happened in many cases is that as opioids were prescribed so freely that there was a good supply for friends, family, and to sell. Here's one more chart from the CDC, this one showing where those who abuse opioids get their drugs. Three of the categories are: given by a friend or relative for free; stolen from a friend or relative; and bought from a friend or relative.

For example, a study published in JAMA Surgery in November 2017 found that among patients who were prescribed opioids for pain relief after surgery, 67-92%  ended up not using their full rescription.

This narrative of how the medical profession fueled the opioid crises has gotten some pushback from doctors. For example, Nabarun Dasgupta, Leo Beletsky, and Daniel Ciccarone wrote (The Opioid Crisis: No Easy Fix to Its Social and Economic Determinants" in the February 2018 issue of the American Journal of Public Health (pp. 182-186). After briskly acknowledging the evidence, the paper veers into the importance of "the urgency of integrating clinical care with efforts to improve patients’ structural environment. Training health care providers in “structural competency” is promising, as we scale up partnerships that begin to address upstream structural factors such as economic opportunity, social cohesion, racial disadvantage, and life satisfaction. These do not typically figure into the mandate of health care but are fundamental to public health .As with previous drug crises and the HIV epidemic, root causes are social and structural and are intertwined with genetic, behavioral, and individual factors. It is our duty to lend credence to these root causes and to advocate social change."

Frankly, that kind of essay seems to me to me an attempt the fact that the health care profession made extraordinarily poor decisions. We had root causes back in 1999. We have root causes now. It isn't the root causes that brought the opioid crisis down on us.

As another example, Sally Satel contributed an essay on "The Myth of What’s Driving the Opioid Crisis: Doctor-prescribed painkillers are not the biggest threat," to Politico (February 21, 2018).  She makes a number of reasonable points. Tthe current rise in opioid deaths is being driven by heroin and fentanyl, not prescription opioids. Only a very small percentage of those who are prescribed prescription opioids become addicts, and many of those had previous addiction problems.


In turn, millions of unused pills end up being scavenged from medicine chests, sold or given away by patients themselves, accumulated by dealers and then sold to new users for about $1 per milligram. As more prescribed pills are diverted, opportunities arise for nonpatients to obtain them, abuse them, get addicted to them and die. According to SAMHSA, among people who misused prescription pain relievers in 2013 and 2014, about half said that they obtained those pain relievers from a friend or relative, while only 22 percent said they received the drugs from their doctor. The rest either stole or bought pills from someone they knew, bought from a dealer or “doctor-shopped” (i.e., obtained multiple prescriptions from multiple doctors). So diversion is a serious problem, and most people who abuse or become addicted to opioid pain relievers are not the unwitting pain patients to whom they were prescribed.

But her argument is that even though it was true 5-10 years ago that three-quarters of the heroin addicts showing up at treatment centers said they had got their start using presciption opioids, more recent evidence is that addicts are starting with heroin and fentanyl directly. Ultimately, Satel writes:


What we need is a demand-side policy. Interventions that seek to reduce the desire to use drugs, be they painkillers or illicit opioids, deserve vastly more political will and federal funding than they have received. Two of the most necessary steps, in my view, are making better use of anti-addiction medications and building a better addiction treatment infrastructure.

This specific recommendation makes practical sense, and it sure beats a ritual invocation of "root causes," but I confess it still rubs me the wrong way. We didn't have these demand-side interventions back in 1999, either, but the number of drug overdoses was much lower. Sure, the nature of the opioid crisis has shifted in recent years. But prescription opioids are still being prescribed at triple the level of 1999. And given that the medical profession lit the flame of the current opioid crisis, it seems evasive to seek a reduced level of blame by pointing out that the wildfire has now spread to other opioids. .


For a list of possible policy steps, one starting point is the President's Commission on Combating Drug Addiction and the Opioid Crisis, which published its report in November 2017. The 56 recommendations make heavy use of terms like "collaborate," "model statutes," "accountability," "model training program," "best practices," "a data-sharing hub," "community-based stakeholders," "expressly target Drug Trafficking Organizations," "national outreach plan," "incorporate quality measures," "the adoption of process, outcome, and prognostic measures of treatment services,"" prioritize addiction treatment knowledge across all health disciplines." "telemedicine," "utilizing comprehensive family centered approaches," "a comprehensive review of existing research programs," "a fast-track review process for any new evidence-based technology," etc. etc. There are probably some good suggestions embedded here, like fossils sunk deeply into a hillside. Hope someone can disinter them.
Posted by Timothy Taylor at 9:00 AM