Some Economics of Place-Based Policies

When it comes to public policies for helping the poor, economists have tended to favor a focus on individuals who are poor, rather than on places that had a higher share of poor people. This seemed like a better way to target scarce public resources. There was some fear that if the focus shifted to places, much of the benefit would flow to homeowners who lived in those places--and thus saw an improvement in property values-- or to local building contractors, rather than helping the poor directly. Also, a healthy economy will see a flow of people moving toward destinations that are more attractive, while place-based support of locations that aren't doing well would tend to hinder such migration.

But some economists are rethinking the mertics of place-based policies. Benjamin Austin, Edward Glaeser, and Lawrence H. Summers have written "Saving the heartland: Place-based policies in 21st century America ," for the Spring 2018 issue of the Brookings Papers on Economic Activity. As they argue, we seem to have entered a time when geographic mobility is down and when regional convergence of incomes has dropped off.  They write:


"America’s western frontier may have closed at the end of the 19th century, but there was still a metropolitan frontier where workers from depressed areas could find a more prosperous future. Five facts collectively suggest that this geographic escape valve has tightened: declining geographic mobility, increasingly inelastic housing supplies in high income areas, declining income convergence, increased sorting by skill across space, and persistent pockets of non-employment. Together these facts suggest that even if income differences across space have declined, the remaining economic differences may be a greater source of concern. Consequently, it may be time to target pro-employment policies towards our most distressed areas. ...

"We divide the U.S. into three regions: the prosperous coasts, the western heartland and the eastern heartland, The coasts have high incomes, but the western heartland also benefits from natural resources and high levels of historical education. America’s social problems, including non-employment, disability, opioid-related deaths and rising mortality, are concentrated in America’s eastern heartland, states from Mississippi to
Michigan, generally east of the Mississippi and not on the Atlantic coast. The income and employment gaps between three regions are not converging, but instead seem to be hardening ..." 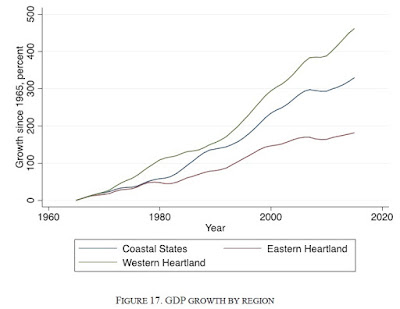 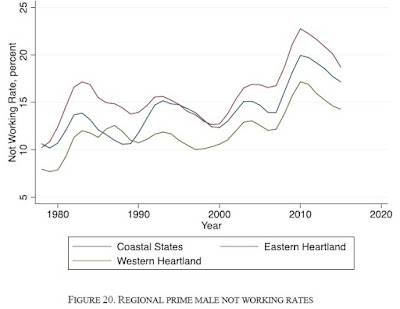 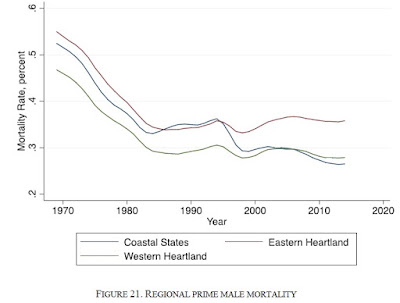 What would place-based policies look like? As the authors point out, such policies can be explicit or implicit. For example, an infrastructure policy like the Tennessee Valley Authority is explicitly aimed at a certain geographic region. However, an infrastructure project like the federal  highway system, or a program like flood insurance, will clearly have specific geographic effects for those closer to highways or at higher risk of floods, without actually naming a certain geographic area. After mulling the options, they suggest that targeted employment subsidies may be the best bet. They write:

For those interested in this approach, here's an earlier discussion of "What Do We Know about Subsidized Employment Programs?" (April 25, 2016).