Rebalancing the Economy Toward Workers and Wages

Economists have recognized for a long time that in negotiations between employers and workers, the employer has a built-in advantage. John Bates Clark ,  probably the most eminent American economist of his time, put it this way in his 1907 book, Essentials of Economic Theory

"In the making of the wages contract the individual laborer is at a disadvantage. He has something which he must sell and which his employer is not obliged to take, since he [that is, the employer] can reject single men with impunity. ...  A period of idleness may increase this disability to any extent. The vender of anything which must be sold at once is like a starving man pawning his coat—he must take whatever is offered."

Are there some ways to tip the balance a bit more toward workers? Jay Shambaugh and Ryan Nunn have edited an ebook, Revitalizing Wage Growth: Policies to Get American Workers a Raise, with nine chapters on causes of wage stagnation and policy proposals to address it (published by the Hamilton Project at the Brookings Institution, February 2018, full Table of Contents is appended below). Given that the US unemployment rate has now been 5% or less for more than two years, since September 2016, the question of wage growth is rightfully assuming high importance.

In an overview essay, "How Declining Dynamism Affects Wages," Jay Shambaugh, Ryan Nunn, and Patrick Liu point out that labor markets have come less dynamic. A dynamic market is always experiencing gross creation of jobs and gross losses of jobs, which together make up net job creation. But gross job creation is down. So is employer-to-employer movement. So are the levels of start-up firms, which are often a source of productivity growth and new job hires. 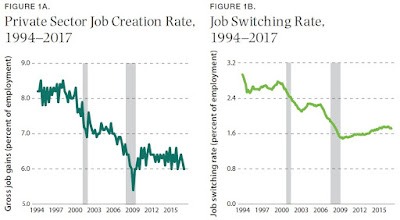 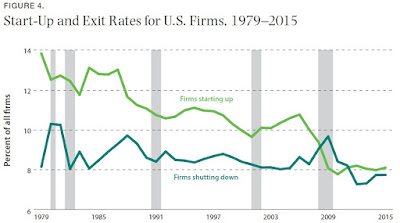 I found several of the chapters about improving worker bargaining power to be especially interesting.


"Today, non-competes are widely used in a variety of occupations, especially among knowledge workers and executives. Prescott, Bishara, and Starr (2016) estimate that 18 percent of respondents to an online survey across a broad set of occupations had signed a non-compete for their current job. Looking specifically at engineers, Marx (2011) finds that 43 percent of workers had signed a non-compete in the past 10 years. Executives were even more likely to have signed: Garmaise (2011) finds that at least 70 percent of senior executives in public companies were bound by a non-compete. ...

"Perhaps the most well-established effect in the non-compete literature is that such employment agreements discourage workers from changing jobs. ... If non-compete agreements discourage workers from changing jobs, this restriction circumscribes the effective market for their skills. With fewer firms to bid for their labor, they might receive fewer and less-attractive job offers. ...  To date, the only published paper to investigate the impact of non-compete agreements on wages is Garmaise (2011). He finds that executives are paid less in states that have adopted stricter noncompete
policies. ..[T]alent flows less within states with tighter non-compete laws. Researchers have also examined labor flows across states. Marx, Singh, and Fleming (2015) find that Michigan’s rule change providing for enforcement of non-compete agreements  resulted in a brain drain of talent out of the state. Specifically, technical workers left for other states with less-strict enforcement of non-competes. Worse, this brain drain due to non-compete agreements is greater for the most highly skilled workers.. ... Non-competes act as a brake on entrepreneurial activity, both by blocking the emergence  of new companies and by making it harder for them to grow. ... Non-competes not only make it more difficult to start a company, but also make it harder to grow a start-up."


In "A Proposal for Protecting Low‑Income Workers from Monopsony and Collusion," Alan B. Krueger and Eric A. Posner argue:


"New evidence that labor markets are being rendered uncompetitive by large employers suggests that the time has come to strengthen legal protections for workers. Labor market collusion or monopsonization—the exercise of employer market power in labor markets—may contribute to wage stagnation, rising inequality, and declining productivity in the American economy, trends which have hit low-income workers especially hard. To address these problems, we propose three reforms. First, the federal government should enhance scrutiny of mergers for adverse labor market effects. Second, state governments should ban  non-compete covenants that bind low-wage workers. Third, no-poaching arrangements among establishments that belong to a single franchise company should be prohibited."


"In the U.S. labor market, information on wages and compensation is decidedly asymmetric. Employees frequently do not know how their pay compares to comparable workers, either within or outside their firm, and are reluctant to seek this knowledge out of fear of retaliation, social norms, or general inertia. In stark contrast, many employers use compensation surveys to know precisely where their workers fall in the distribution of wages. In other markets characterized by asymmetric information, the entity with more complete information maintains a distinct advantage (Hart and Holmström 1987); the U.S. labor market is likely no different. ...

"This paper puts forth an aggressive agenda to promote better wage transparency through a five-part proposal. ... The first pillar of the proposal advocates for states to adopt comprehensive laws, such as those found in Michigan, both to protect workers from employer retaliation for discussing wages, and to discourage employers from asking workers to waive their right to disclose pay. ... The second pillar of the proposal addresses the interrupted progress of a 2016 action by the EEOC that would require large companies to more comprehensively report their compensation data. The action ... would have required companies with more than 100 workers to report aggregated wage data by demographic characteristics. ... The third pillar ...  would reform the safe harbor guidelines, which protect firms from claims of wage collusion, to require that companies share any commissioned compensation survey data with workers. ... The fourth pillar explicitly prohibits employers from asking about prior pay levels during the hiring process unless they provide data on the pay of comparable workers. ... The fifth pillar ,,, calls for Congress to appropriate a small amount of funds for the U.S. Department
of Labor (DOL) to study the impact of wage transparency on compensation levels."

Section I: Understanding Wage Stagnation and Its Policy Solutions

Chapter 2: Returning to Education: The Hamilton Project on Human Capital and Wages
by Jay Shambaugh, Lauren Bauer, and Audrey Breitwieser

Chapter 3: Stagnation in Lifetime Incomes: An Overview of Trends and Potential Causes
by Fatih Guvenen

Chapter 5: The Importance of Strong Labor Demand
by Jared Bernstein

Chapter 7: A Proposal for Protecting Low-Income Workers from Monopsony and Collusion
by Alan Krueger and Eric Posner