The Congressional Budget Office has published the latest version of its occasional report on "The Distribution of Household Income, 2014" (March 2018). It's an OK place to start for a fact-based discussion of the subject. Here is one figure in particular that caught my eye. 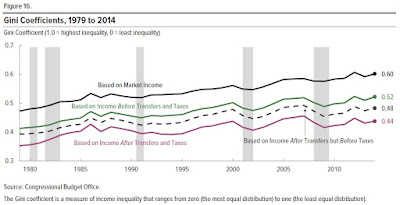 In this figure, the top line shows the Gini coefficient based on market income, rising over time.

The green line shows the Gini coefficient when social insurance benefits are included: Social Security, the value of Medicare benefits, unemployment insurance, and worker's compensation. Inequality is lower with such benefits taken into account, but still rising. It's worth remembering that almost all of this change is due to Social Security and Medicare, which is to say that it is a reduction in inequality because of benefits aimed at the elderly.

The dashed line then adds a reduction in inequality due to means-tested transfers. As the report notes, the largest of these programs are "Medicaid and the Children’s Health Insurance Program (measured as the average cost to the government of providing those benefits); the Supplemental Nutrition Assistance Program (formerly known as the Food Stamp program); and Supplemental Security Income." What many people think of as "welfare," which used to be called Aid to Families with Dependent Children (AFDC) but for some years now has been called Temporary Assistance to Needy Families (TANF), is included here, but it's smaller than the programs just named.

2) Moreover, a large share of the reduction in inequality shown in this figure is a result of "in-kind' programs that do not put any cash in the pockets of low-income people. This is true of the health care programs, like Medicare, Medicaid, and the Children's Health Insurance Program, as well as of the food stamp program. These programs do benefit people by covering a share of health care costs or helping buy food, but they don't help to pay for other costs like the rent, heat, or electricity.

3) Contrary to popular belief, federal taxes do help to reduce the level of inequality. This figure shows the average tax rate paid by those in different income groups. The calculation includes all federal taxes: income, payroll, corporate, and excise. It is the average amount paid out of total income, which includes both market income and Social Security benefits. 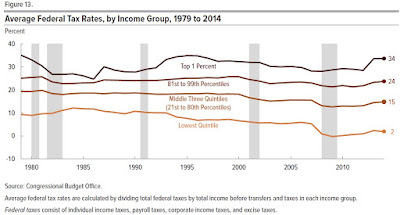 4) Finally, to put some dollar values on the Gini coefficient numbers, here is the average income for each of these groups in 2014. (Remember, this includes both cash and in-kind payments from the government, and all the different federal taxes.)
(I'm a long-standing fan of CBO reports. But n the shade of this closing parenthesis, I'll add in passing that the format of this report has changed, and I think it's a change for the worse. Previous versions had more tables, where you could run your eye down columns and across rows to see patterns. This figure is nearly all figures and bar charts. It's quite possible that I'm more in favor of seeing underlying numbers and tables than the average reader. And it's true that you can go to the CBO website and see the numbers behind each figure. But in this version of the report, it's harder (for me) to see some of the patterns that were compactly summarized in a few tables in previous reports, but are now spread out over figures and bar graphs on different pages.)
Posted by Timothy Taylor at 8:00 AM