The Lancet has just published a recent set of papers from the Global Burden of Disease Study. As it notes: "The Global Burden of Disease Study (GBD) is the most comprehensive worldwide observational epidemiological study to date. It describes mortality and morbidity from major diseases, injuries and risk factors to health at global, national and regional levels. Examining trends from 1990 to the present and making comparisons across populations enables understanding of the changing health challenges facing people across the world in the 21st century."

Interested readers will find lots to chew on in these papers. Here, I'll stick to a figure showing "global population pyramids" from the article "Population and fertility by age and sex for 195 countries andterritories, 1950–2017: a systematic analysis for the Global Burden of Disease Study 2017," authored by the GBD 2017 Population and Fertility Collaborators (Lancet, published November 10, 2018; 392: 10159, pp. 1995–2051). 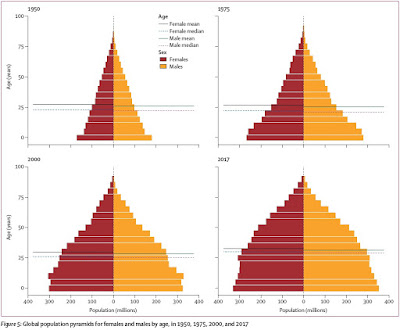 The four panels show four years: 1950, 1975, 2000, and 2017. The red bars show size of female population at different age groups, from younger ages at the bottom to older ages at the top; the yellow bars do the same for men. Horizontal lines show the average and median age for men and women in each year.

4) The increasing area of the pyramids shows the rise in global population since 1950. Less clear to the naked eye is that the rate of growth in the world  population has shifted from being exponential to being linear.

5) Although geographic breakdowns aren't shown in this figure, the regional patterns of population growth have also differed substantially.