Unauthorized Immigrants to US Continues to Decline

The total number of unauthorized immigrants in the US climbed very rapidly in the 1990s and early 2000, but peaked around 2007, and has declined since then. Jeffrey S. Passel and D’Vera Cohn report details in "U.S. Unauthorized Immigrant Total Dips to Lowest Level in a Decade," just published by the Pew Research Center (November 28, 2018).

Here's an illustrative figure. The number of unauthorized immigrants more than doubled in the 1990s from 3.5 million in 1990 to 8.6 million, and then kept rising up to 12.2 million in 2007, but has declined since then. 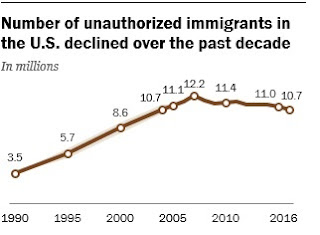 I've noted this decline and discussed some of the reasons for this drop in the number of unauthorized immigrants in earlier posts (see here and here): for example, the Great Recession in the US from 2007-2009, improved growth prospects for Mexico's economy in the last couple of decades, fewer children per women and an overall aging of Mexico's workforce, and stepped-up border enforcement.

The report from Passel and Cohn breaks down the estimates of unauthorized immigrants in a variety of ways: by location, age, occupation, parental status, and so on. Here, I'd like to emphasize two points. 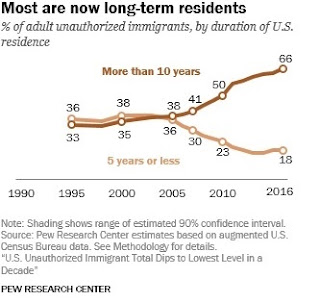 To put differently, one can argue that a main policy problem of the 1990s and early 2000s was to limit additional unauthorized immigration, and that both the Clinton and Bush administrations failed to do so. But the main immigration enforcement problem at present is not to block growing numbers of unauthorized migrants: it is how we address the issue of about 7 million unauthorized immigrants who have been here more than a decade, and who have put down roots in their communities. For example, about 43% of the unauthorized immigrants live in households that include a total of about 5 million US-born, American-citizen children.

A couple of years ago, I wrote about an article by Gordon Hanson and Craig McIntosh called "Is the Mediterranean the New Rio Grande? US and EU Immigration Pressures in the Long Run," which appeared in the Fall 2016 issue of the Journal of Economic Perspectives. They wrote:


The European immigration context today looks much like the United States did three decades ago. In Europe, which long ago made its demographic transition to low birth rates, declines in fertility in the 1970s and 1980s set the stage for a situation in which the number of working-age residents is in absolute decline. Countries in the North Africa and Middle East region, in contrast, have had continued high fertility, creating bulging populations of young people looking for gainful employment in labor markets plagued by low wages and the scarcity of steady work. Further to the south, population growth rates in sub-Saharan Africa, a region with still lower relative earnings, remain among the highest in the world. ...

As an example, we predict the number of African-born first-generation migrants aged 15 to 64 outside of sub-Saharan Africa to grow from 4.6 million to 13.4 million between 2010 and 2050. During this same period, the number of working-age adults born in the region will expand from under half a billion to more than 1.3 billion, meaning that international migration would only absorb 1 percent of the overall population growth. ... The coming half century will see absolute population growth in sub-Saharan Africa five times as large as Latin America’s growth over the past half century.

P.S. A recent alternative study of the size of the unauthorized immigrant population estimates a substantially higher total. Mohammad M. Fazel-Zarandi, Jonathan S. Feinstein, Edward H. Kaplan published "The number of undocumented immigrants in the United States: Estimates based on demographic modeling with data from 1990 to 2016," in PLoS ONE (published September 21, 2018). Two quick comments here:

1) Although this study finds a higher total number of unauthorized immigrants at any given time, the pattern over time is the same: that is, a sharp rise in the 1990s and the early 2000s, and then a leveling off after about 2007.

2) The assumptions behind these alternative estimates have been questioned. In a follow-up "Commentary" published simultaneously online on PLoS One, Randy Capps, Julia Gelatt, Jennifer Van Hook, and Michael Fix point out that the model is not benchmarked against other available demographic data, and in fact is inconsistent with such data. In particular, their estimates are highly sensitive to what assumptions are made about how many unauthorized immigrants return to Mexico and other places on their own: if you assume that very few return (an assumption not backed up by the available survey evidence), then the total remaining the US will obviously look much higher.
Posted by Timothy Taylor at 10:35 AM