Some Economics of World War I

What we now call World War I was known at the time, and for several decades afterward, simply as the "Great War." It wasn't until the arrival of World War II that World War I was re-christened. The Great War ended 100 years ago on November 11, 1918.

Stephen Broadberry and Mark Harrison have edited a collection of 20 essays called The Economics of the Great War: A Centennial Perspective (November 2018, free registration needed). It's a VoxEU.org Book published by CEPR Press, The useful approach of these books is to focus on short and readable essays, often 6-10 pages in length, in which the authors bring out some of the key points from their previous or ongoing  research. Thus, the books offer a gentle introduction to a broader swath of the literature. I'll list the full table of content below. Here, I'll offer a few tidbits.

As the editors point out, many of the modern discussion so the Great War focus on changes  that happened in the aftermath of the war, many of which are hot topics again a century later. Examples of such topics with echoes for the present day include:

The Great War marked the end of a period that had shown a strong rise in economic inequality. Walter Scheidel writes: "In the years leading up to World War I, economic inequality in many industrial nations was higher than it had ever been before. In the early 1910s, the highest-earning 1% of adults in France, Germany, Japan, the Netherlands, the UK, and the US received
approximately one-fifth of all personal income. Income inequality then was much greater than it is now, except in the US, where the level of the 1910s has returned. ... Personal wealth was even more concentrated. The UK, where the richest 1% owned almost 70% of all wealth, led the pack. Today’s figure is closer to 20%. The corresponding French, Dutch, and Swedish shares of close to 60% were the highest ever recorded for these countries and between two and three times as large as they are now. Uncharacteristically, the US was lagging behind, even though its wealth concentration was also – if only moderately – greater than it is today ... "

The Great War brought the first great deglobalization of the world economy. David Jacks writes: "I document the evolution of world trade up to the precipice of World War I and the implosion of world trade in the initial years of the war, along with important changes in the composition of trade. Chief among these was the dramatic erosion in the share of Europe in world exports in general, and in the share of Germany in European exports in particular. Turning an eye to more long-run developments, World War I emerges as a clear inflection point in the evolution of the global economy. The diplomatic misunderstandings, economic headwinds, and political changes introduced in its wake can be discerned in the data as late as the 1970s."

The Great War showed how to address a Depression, but the lesson wasn't learned. Hugh Rockoff explains: "Policymakers might have drawn the conclusion from World War I that deficit spending combined with an expansionary monetary policy had propelled the economy toward full employment – a lesson that would have been enormously valuable in the Depression. ... Although lessons about the effectiveness of monetary and fiscal policy could have been drawn from the war, economic theory was not ready. ... The methods used for dealing with shortages during the war, whatever their success in wartime, were simply inappropriate for dealing with the Depression. Although the Roosevelt administration wrestled mightily with the Depression, and produced important pieces of social legislation such as Social Security and the minimum wage, many of its programmes were aimed simply at reallocating resources from one interest group to another, rather than creating the additional demand that would have done the most to ameliorate the Depression."

The Great War marked the end of unrestricted mass migration. Drew Keeling points out: "The war declarations of August 1914 spelled far-reaching alterations to the fundamental character of modern long-distance international mass migration. For most of the preceding century, in the majority of big economies, international human relocation had been largely peaceful, voluntary, and motivated by market incentives. Since then, politically determined quotas and legal restrictions, and flight from war, oppression or similarly fearsome dangers and disasters, have been more salient ..."

The Great War brought an international refugee crisis. Peter Gatrell writes: "Amidst all the current talk of an international ‘refugee crisis’, it is worth pointing out that World War I yielded a harvest of mass population displacement that caught contemporaries by surprise and is only now attracting scholarly attention. It uprooted upwards of 14 million civilians whose suffering generated widespread sympathy and encouraged often impressive programmes of humanitarian aid as well as self-help. In Western Europe wartime displacement did not leave a lasting legacy, because refugees were able to return to their homes. But in Eastern Europe and the Balkans, the situation was complicated by revolution, civil war, the collapse of three continental empires, and a series of population exchanges."

The volume also looks in more detail at the history of the war itself. As an example, Mark Harrison contributes an opening essay, "Four Myths about the Great War." Here's a summary, with citations omitted for readability.

Myth 1: "How the war began: An inadvertent conflict?"

"There was no inadvertent conflict. The decisions that began the Great War show: • agency, • calculation, • foresight, and • backward induction. Agency is shown by the fact that, in each country, the decision was made by a handful of people. These governing circles included waverers, but at the critical moment the advocates of war, civilian as well as military, were able to dominate. Agency was not weakened by alliance commitments or mobilisation timetables. ... What ruled the leaders’ calculation in every country was the idea of the national interest ... While the ignorant many hoped for a short war, the informed few rationally feared a longer, wider conflict. They planned for this, acknowledging that final victory was far from certain. ... The European powers understood deterrence. No one started a war in 1909 or 1912 because at that time they were deterred. War came in 1914 because in that moment deterrence failed."

Myth 2: "How the war was won: Needless slaughter?"

"Another myth characterises fighting in the Great War as a needless wasteful of life. In fact, there was no other way to defeat the enemy. Attrition was not a result of trench warfare. Attrition became a calculated strategy on both sides. From the Allied standpoint, the rationality of attrition is not immediately clear. The French and British generally lost troops at a faster rate than the Germans. Based on that alone, the Allies could have expected to lose the war. The forgotten margin that explains Allied victory was economic. This was a war of firepower, as well as manpower. ...  When America joined the war and Russia left it, the Allied advantage declined in population but rose in production. On the basis of their advantage, ... the Allies produced far more munitions, including the offensive weaponry that finally broke the stalemate on the Western front."

"Hunger was decisive in the collapse of the German home front in 1918. Was Germany starved out of the war by Allied use of the food weapon? In Germany, this myth became prevalent and assumed historic significance in Hitler’s words ... It is true that Germany imported 20‐25% of calories for human consumption before the war. Wartime imports were limited by an Allied blockade at sea and (via pressure on neutrals) on land. At the same time, German civilians suffered greatly – hunger-related mortality is estimated at around 750,000. But decisions made in Berlin, not London, did the main damage to German food supplies. ... [T]the effects of the loss of trade were outweighed by Germany’s war mobilisation. Mobilisation policies damaged food production in several ways. On the side of resources, mobilisation diverted young men, horses, and chemical fertilisers from agricultural use to the front line. Farmers’ incentives to sell food were weakened when German industry was converted to war production and ceased to supply the countryside with manufactures. Government initiatives to hold down food prices for the consumer did further damage. Because trade supplied at most one quarter of German calories, and German farmers the other three quarters, it is implausible to see the loss of trade as the primary factor. Germany’s own war effort probably did more to undermine food supplies."

Myth 4: "How the peace was made: Folly at Versailles?"

"Since Keynes (1920), many serious consequences have been ascribed to the treaty of Versailles. ...  Germany actually paid less than one fifth of the 50 billion gold marks that were due. From 1924, there was no net drain from the Germany economy because repayments were covered by American loans. Eventually, Hitler defaulted on both loans and reparations. German governments could have covered most of it [the reparations] by accepting the treaty limits on military spending. Instead, they evaded it by means of a ‘war of attrition’ against foreign creditors. The Allied pursuit of reparations was unwise and unnecessarily complicated Europe’s postwar readjustment, but it is wrong to conclude that it radicalised German politics. The political extremism arising from the treaty was short-lived. In successive elections from 1920 through 1928, a growing majority of German votes went to moderate parties that supported constitutional government. In fact, Weimar democracy’s bad name is undeserved. It was the Great Depression that reawakened German nationalism and put Hitler in power."

Here's the full Table of Contents 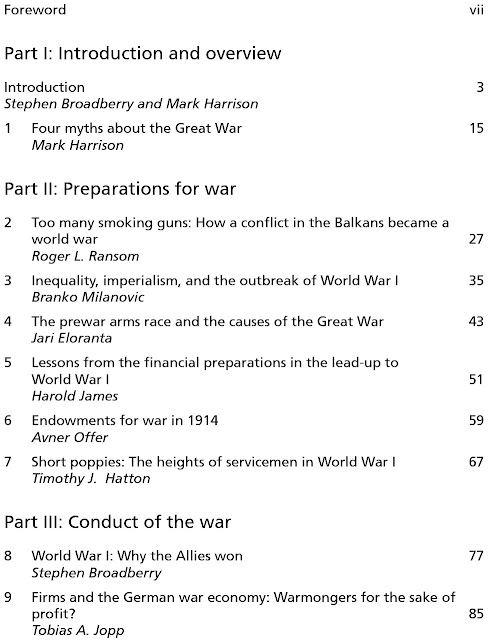 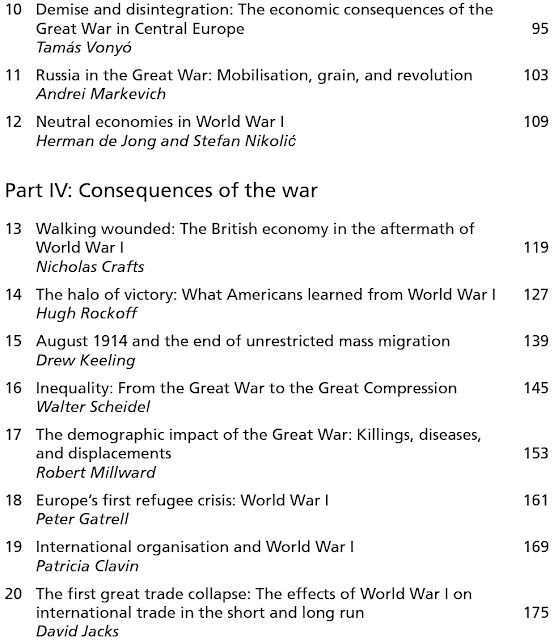 Posted by Timothy Taylor at 9:42 AM