Global Perspective on Markets for Sand

Trivia question: If measuring by volume, what mined product is the largest? The answer is "sand and gravel," sometimes known in the geology business as "aggregates." In particular, aggregates are used for concrete and asphalt, and demand for these products from China and other emerging markets has skyrocketed. Sand is also used as part of hydraulic fracturing, so in the United States demand from that source has surged as well. And sand and gravel are also widely used for purposes ranging from land reclamation and water treatment to industrial production of electronics, cosmetics and glass.

Sand and gravel are being mined at an exceptionally rapid rate. There is strong anecdotal evidence of that environmental harms are occurring in some locations, and that more locations are threatened, but systematic analysis has been missing. The UN Environmental Programme offers an update on the situation in "Sand and Sustainability: Finding New Solutions for Environmental Governance of Global Sand Resources" (May 2019).

Here's a sense of the scale of the issue (citations omitted for readability):

An estimated 40-50 billion metric tonnes is extracted from quarries, pits, rivers, coastlines and the marine environment each year. The construction industry consumes over half of this volume annually (25.9 billion to 29.6 billion tonnes in 2012) and could consume even more in future. Though little public data exists about extraction volumes, sources and uses we know that, with some exceptions, most sand and gravels extracted from natural environments are consumed regionally because of the high costs of transport. For example, two thirds of global cement production occurs in China (58.5%) and India (6.6%).

Global concrete production has tripled since the early 1990s. 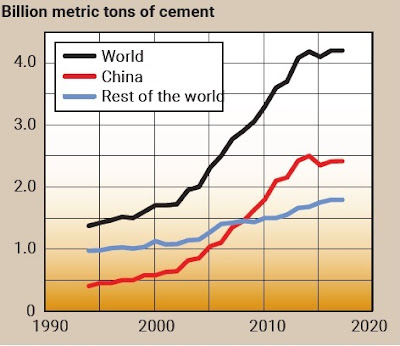 One obvious question here is how it is remotely possible to run out of sand, given the existence of deserts. But it turns out that sand recently shaped by water is what is economically useful. As the report notes: "Desert sand, though plentiful, is unusable for most purposes because its wind-smoothed grains render it non-adherent for the purposes of industrial concrete."

Mining enormous quantities of sand from beaches and riverbanks, as well as dredging it from offshore, is linked to a wide array of environmental damages. Here's an overview, again with citations omitted:


Aggregate extraction in rivers has led to pollution and changes in pH levels, instability of river banks leading to increased flood frequency and intensity, lowering of water aquifers, exacerbating drought occurrence and severity. Damming and extraction have reduced sediment delivery from rivers to many coastal areas, leading to reduced deposits in river deltas and accelerated beach erosion. This adds to effects of direct extraction in onshore sand extraction in coastal dune systems and nearshore marine dredging of aggregates, which may locally lead to long-term erosion impacts. Nearshore and offshore sand extraction in New Zealand continues despite considerable uncertainty of the environmental and the cumulative effects of mining, climate change and urbanisation of the coast.

Tourism is affected by loss of key species and beach erosion, while both freshwater and marine fishing — both traditional and commercial — has been shown to be affected through destruction of benthic fauna that accompanies dredging activities. Agriculture land has been affected by river erosion in some cases and the lowering of the water table. The insurance sector is affected through exacerbation of the impact of extreme events such as floods, droughts,and storm surges which can affect houses and infrastructure. A decrease in bed load or channel shortening can cause downstream erosion including bank erosion and the undercutting or undermining of engineering structures such as bridges, side protection walls and structures for water supply. ... For example, the use of sand in reclamation practices is thought to have led to increased turbidity and coral reef decline in the South China Sea. In the Mekong basin, the impact of sand mining in Laos, Thailand, and Cambodia is felt on the Vietnam delta erosion. Singapore demand for sand and gravel in land reclamation projects have triggered an increase in sand mining in Cambodia and Vietnam ...

For a more detailed overview of environmental risks, Lois Koehnken has written "Impacts of Sand Mining On Ecosystem Structure, Process, and Biodoversity in Rivers" (2018) for the World Wildlife Fund.

The potential answers here are conceptually straightforward, but can be difficult to implement. The implications of large-scale sand-mining should be considered before the actual mining starts. It would be useful to think about recycling sand-related products to other uses, where possible, like finding ways to re-use old concrete or waste asphalt. Research is ongoing to find alternative substances that could be used in concrete to replace sand: some suggested possibilities include crushed stone, ash left over after waste incineration, stainless steel slag, coconut shells, sawdust, old tires, and more.

One interesting suggestion is to emphasize "permeable pavement," in which a substantial amount of water can sink through pavement, into the earth, and even reach the groundwater, rather than just running off. The UNEP report notes:


Permeable pavement (sometimes called porous pavement) ... is used in cities around the world, particularly in new cities projects in China and India to reduce surface water runoff volumes and rates by allowing water to infiltrate soil rapidly, helping to reduce flooding while replenishing groundwater reserves. In many cases, permeable roadways, pedestrian walkways, playgrounds, parking zones can also act as water retention structures, reducing or eliminating the need for traditional stormwater management systems. ...  Additional proven benefits include improved water quality, reduced pollutant runoff into local waterbodies, reduced urban heat island effects (great advantage for adaptation to climate change), lower cost of road salting (in cold environments), among others. Less noted is the indirect contribution to reduced demand for natural sand both in constructing these permeable surfaces, and in reducing the need for built drainage systems. Most permeable pavement designs – porous (or pervious) concrete, interlocking pavement slabs, crushed rock and gravels, or clay, amongst other materials – do not use fine aggregates (sand). ...  Recent experimentation has shown that introducing end-of-life tyre aggregates can increase flexibility of rigid permeable pavement systems, and with that their capacity to cope with ground movement or tree root systems.

Mette Bendixen, Jim Best, Chris Hackney and Lars Lønsmann Iversen provide a quick readable overview of these issues in "Time is running out for sand" (Nature, July 2, 2019). They offer these projections for sand demand and prices (drawing on underlying research here). 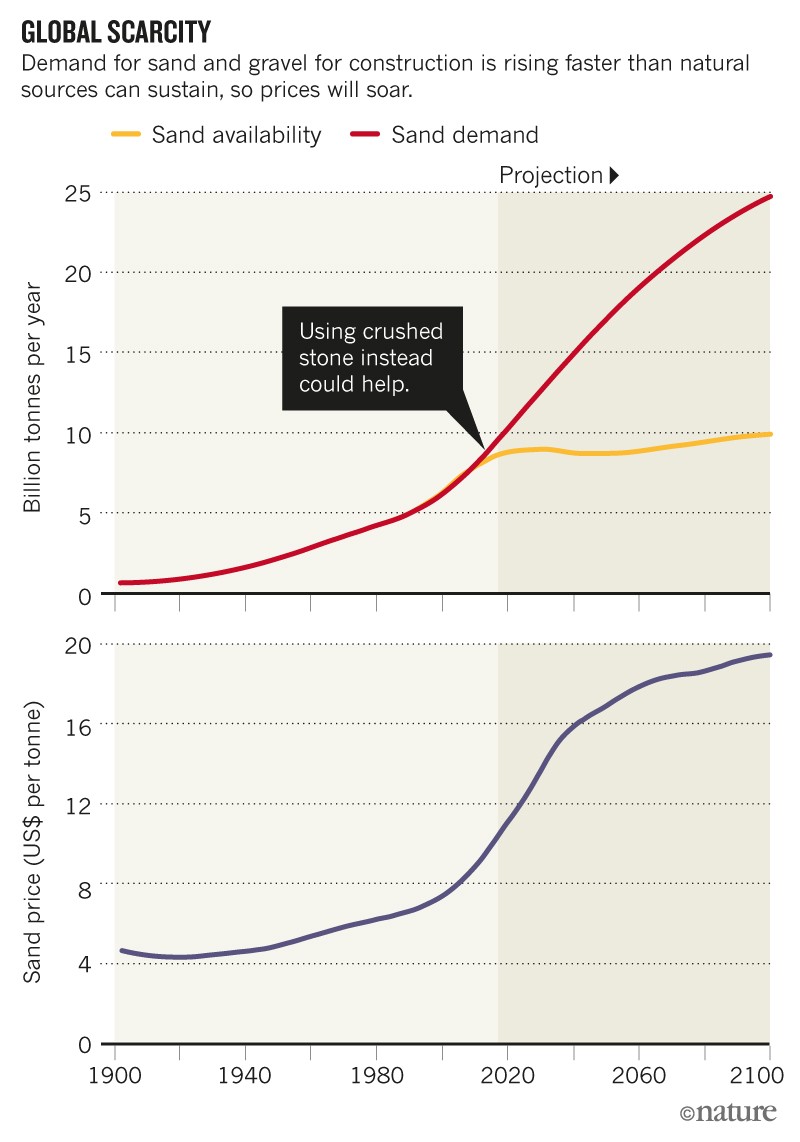 I tend to think of sand and gravel as a nearly infinite resource. But when the world is extracting 50 billion metric tonnes every year of sand and gravel, with that total rising quickly, the effects are far from imperceptible.

For previous posts at this website about global markets for sand, see